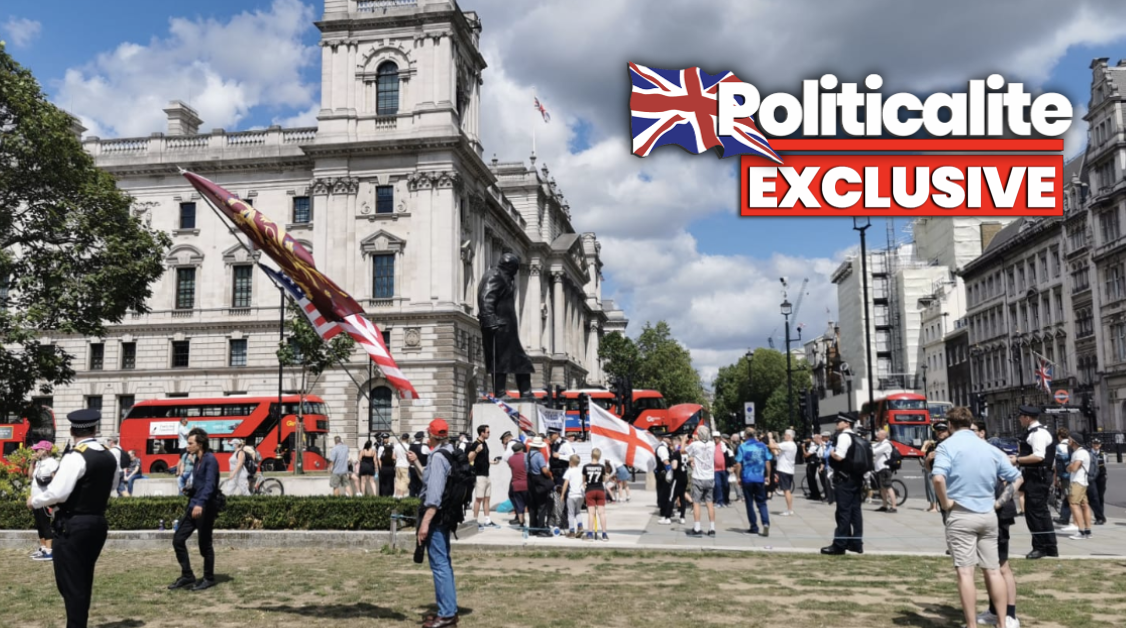 A RALLY to demand the deportation of the Rochdale 3 grooming gang members took place in London on Saturday.

The Hearts Of Oak event, of which was meant to demand the removal of three Pakistani men involved in the Rochdale grooming gang scandal, many came to show their support, with fiery speeches abound.

Following the lack of government action against deporting three Pakistani nationals over the Rochdale grooming gang scandal – despite having – a rally, organised by the populist Hearts Of Oak campaign group co-founded by former Rebel Media contributor Tommy Robinson, Brexit Party founder Catherine Blaiklock and political YouTuber Carl Benjamin, designed to put pressure on the government to do so took place.

Many people showed up in support – possibly over 100 – and the lineup of speakers ranged from across the political spectrum, all joined by one main message; to deport the rapists, all known as the Rochdale 3, due to their involvement in that area’s grooming gang scandal. Abdul Aziz, Adil Khan and Qari Abdul Raul were convicted in 2012 for their role in the grooming gang scandal, all the while losing an appeal in 2018 after their British citizenship was revoked.

Despite this, they’re still living in Rochdale alongside the victims of their crimes nearly a decade on, with Greater Manchester’s Mayor Andy Burnham and Deputy Mayor Bev Hughes writing to subsequent Home Secretaries demanding their removal, with the latter calling the lack of action over their stay ‘completely unacceptable’.

The event began with former Lewisham councillor Alan Craig, of who thanked the attendees for coming, particularly those ‘concerned citizens’ and the ‘parents and carers wanting to protect their daughters and their children from rapists and paedophiles’. This was swiftly followed on by Michelle from the campaign group Women Against Groomers, of who laid out the case in detail, all the while questioning how the victims of those particular men would have ‘closure’ if their rapists are ‘still here, walking the streets of Rochdale’. She then laid out the numerous online groups working to stop the internet grooming, including Innocent Voices and Safe Haven.

Meanwhile, Veterans Against Terrorism co-founder Richard Inman, who gave a very energetic speech, condemned the leftist elements of the establishment of who ‘protected the paedophiles and demonised people that stand against them’, all the while calling for those British citizens involved to be hung by the neck until dead, advocating a return to the death penalty, of which was initially abolished for murder in 1965, before its full abolition in 1998.

In a contrasting speech, Reverend George Hargreaves argued against the use of capital punishment on the Rochdale 3 – citing that God loves all his people, including the paedophiles – but argued instead that ‘Jesus told us not to pursue an eye for an eye’, all the while advocating deportation, noting that in the Biblical stories of Adam and Eve and Cain and Abel to prove that God approves of such methods to deal with people who undermine God and his message of love. He also mentioned how he previously knew the current Conservative Home Secretary Priti Patel, as they’d both been in the Referendum Party during the 1990s, advocating for Britain to exit the European Union. He warned that it shouldn’t be another ‘20 years’ before the Rochdale 3 were deported.

There were also other speakers at the event, mainly those of current leader of the anti-Islam political party the For Britain Movement Anne Marie Waters and the aforementioned Benjamin, of who communicated with the rally via a pre-recorded message. This was the same for the aforementioned Robinson, who is currently in refuge in Spain after his house was allegedly attacked by far-left thugs who objected to his views on the Black Lives Matter organisation. The aforementioned Blaiklock also gave a speech as well.

In an exclusive interview with Politicalite, Inman stated that the rally was important as ‘no-one was doing anything’ about the grooming gang problem in general, all the while wanting to ‘heighten awareness’ so that eventually 100K people would turn up to such events one day.

He also showed his support for child murderers and paedophiles, expressed disappointment at the lack of release of the grooming gang report and commended Labour MPs Ann Cryer and Sarah Champion for having blown the whistle on this problem, despite having been smeared and targeted for it.

The leader of the activist campaign group British Lives Matter stated that ‘today’s rally was a magnificent coming together of Patriotic and concerned Brits. Differing race was not significant, differing religions was not significant… everyone was tied together by passion for this great nation‘.

The event went on without incident or arrest, despite a heavy police presence.