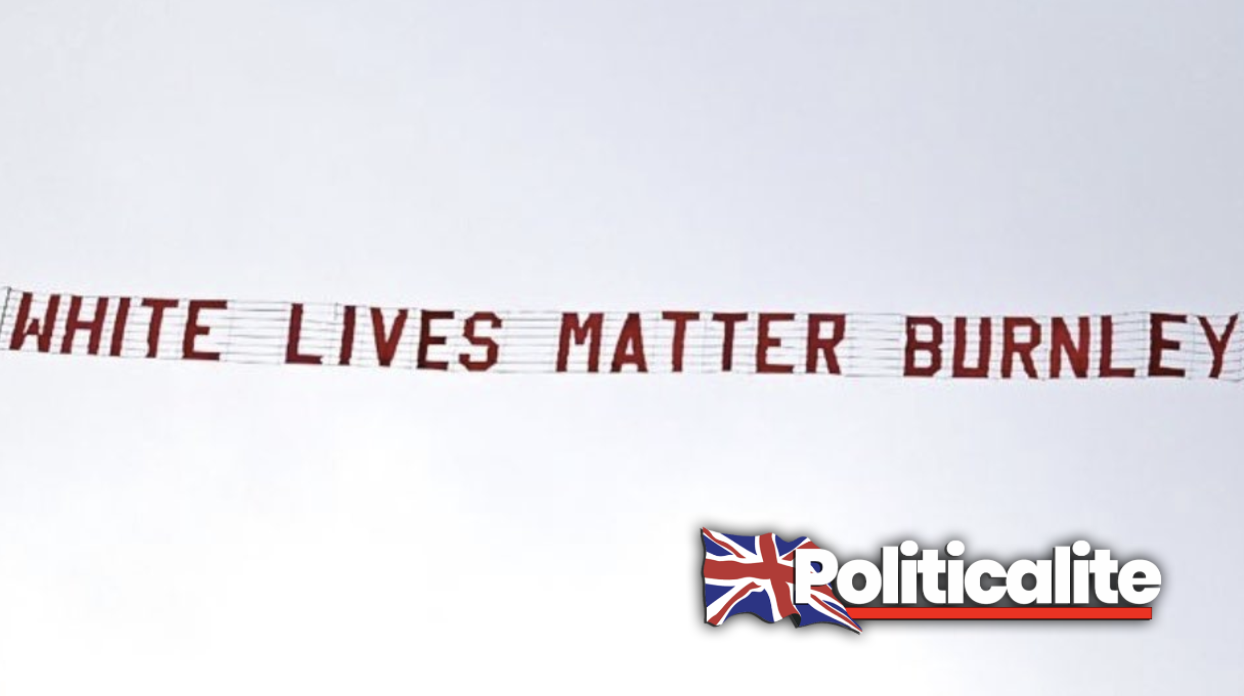 BRITAIN’S media is fuelling the race and culture war in an attempt to divide white and black working-class people in what can be described as ‘divide and rule’.

The row between the ruling media and political class and the ‘average Brit’ has hit fever pitch after the reaction to the innocent ‘White Lives Matter Burnley’ message that was flown over the Ethiad last night.

In a poll of Politicalite readers, 88.6% said that Burnley was wrong to threaten those who organised the stunt with lifetime bans from the club.

Many respondents said that the stunt was not racist and is on par with the ‘Black Lives Matter’ message.

One reader called Bob said: “I think people are going to see a dramatic reduction in crowds next season.”

“Including from the ethnic minorities who also see through all this BS. But then the football clubs won’t mind, it’s the TV money that comes first and always has, since 1992.”

George Jetson said: “I’ve cancelled my sky, and won’t be going back. Thick footballers should be aware that if the left get power they will be earning £300 a week instead of 300k”

Gordon said: “Why was it wrong and disgraceful for the plane to fly the banner “white lives matter” last night.”

“Three innocent white men were brutally murdered by a terrorist on Sunday. Surely concerned people are allowed to express their views without fear of condemnation.”

Milzee said: “I think BLM has performed a masterpiece of state capture. The entire establishment; political, commercial, sporting and cultural is petrified of them and falling over themselves not to be seen criticising BLM in any way shape or form. It’s embarrassing, frightening and dangerous.”

Christine said: “So what is the difference of people protesting for black lives matter. And a banner saying white lives matter. White people are racist agents white people. This world has lost the plot”

Natalie said: “BLM is a serious Marxist anarchic group of trained organisers of whom I find extremely racist: as someone else has just said, if you change the gender, colour or the sex of a comment, then if the wording then becomes offensive then it is either both are offensive or neither are.”

Julie said: “People are people, I don’t give a damn what colour of the skin is, if you’re a nice person is all I care about.”

Dre said: “Britain is becoming increasingly sick of the extreme far left’s constant virtue signalling over everything except the rights of the majority in this country. A very foolish stance to take, I’d suggest.”

What do you think? Let us know.