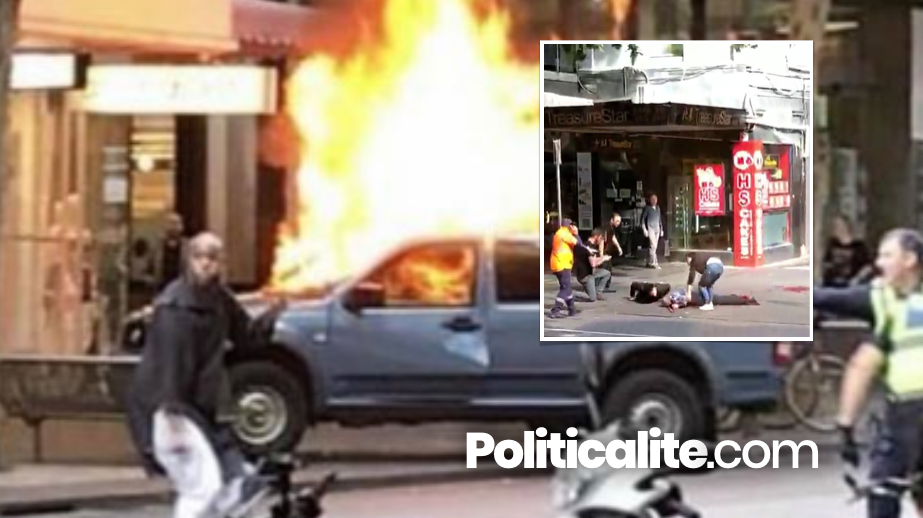 A REFUGEE who killed at least one person and injured several pedestrians on Friday in Melbourne, Australia was a Somalian national who sympathized with ISIS.

He’s been named as Mohamed Khalif, aged 31 and was described by an eyewitness as a “Muslim” and went on a stabbing rampage after ramming his car filled with gas canisters and ‘setting it alight’, the car later ‘exploded’ in Bourke Street, Melbourne in the evening rush hour on Friday. 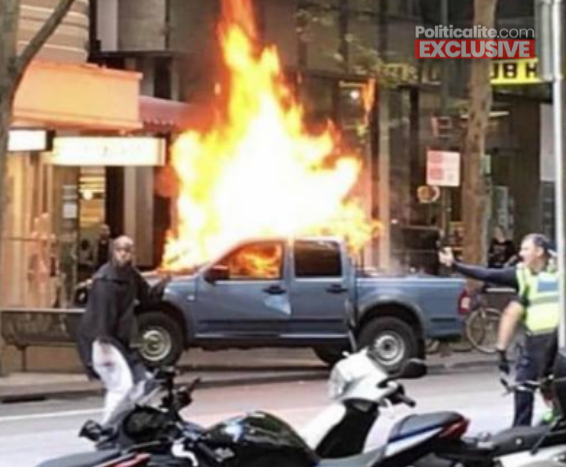 Eyewitnesses, Matty Lep, 39 was driving past when he witnessed the drama unfold, he exclusively told Politicalite that the driver was “Muslim” and described the scene as “Chaos” adding “people were running everywhere and two people stabbed.” 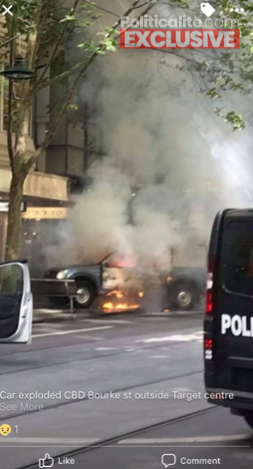 He was known to Aussie authorities and his family had links to ISIS and terror plotters according to the Herald Sun. 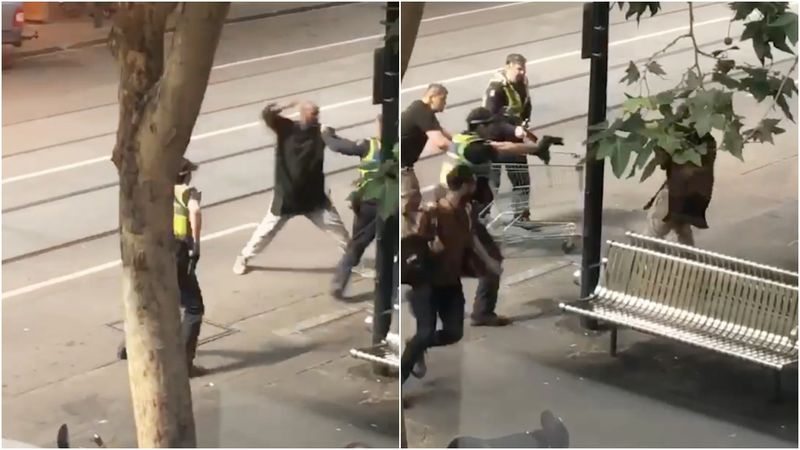 Video posted online and on our Facebook page shows the suspect, who wielded a knife at two of police officers as brave members of the public try to ‘bring him down’ with a trolly and a chair.

Khalif’s 21-year-old brother, Ali Khalif Shire Ali, was arrested in November of 2017 in relation to a foiled terror attack in Federation Square, also in the heart of Melbourne.

Mohamed Khalif, also known as Hassan Shire, 31, was shot and killed by police after deliberately crashing a car filled with ‘barbecue-style gas bottles’ and rampaging through Melbourne’s Bourke Street with a long knife on Friday afternoon.

In a press conference, Victoria Police Chief Commissioner Graham Ashton said Khalif was well known to counter-terrorism officials due to his relatives’ links to terror.

Khalif and his family were known to the Australian Secret Intelligence Organisation after his younger brother was arrested for allegedly attempting the foiled New Year’s Eve 2017 attack, the Herald Sun reported.

Ali was arrested and charged last November and had been the target of an undercover operation by the Australian Federal Police’ (AFP) Joint-Counter-Terrorism Team, Melbourne’s Supreme Court heard in June.

Ali will face a Supreme Court trial after pleading not guilty to the accusations.

His brother Khalif, who also goes by the name Hassan Shire, was rushed to hospital on Friday in a critical condition but later died from gun wounds.

Video shot from the scene showed the frenzied attack that carried on for more than a minute, beginning with Khalif charging at two police officers, punching one through a vehicle window and lunging at them with a knife.

The Islamic State have claimed the attack as their own via the propaganda platform, releasing a statement saying ‘the perpetrator of the operation… in Melbourne… was an Islamic State fighter and carried out the operation… to target nationals of the coalition’ fighting IS, Amaq reported, allegedly quoting a jihadist security source.

Khalif’s passport was cancelled several years ago after he was noted as one of 300 potential security risks.

It was also noted police are unable to get in contact with Khalif’s wife and believe she is both missing and radicalised.

Authorities may be hoping to utilise the state’s preventative detention laws for the first time since they came into effect, in which police are legally allowed to detain a suspect for up to seven days should they believe the person poses a threat or security risk, Herald Sun reported.

Khalif chased the officers around a tree as they tried to avoid his blows and convince the man to surrender, and a brave bystander tried to stop the attack by running him down with a shopping trolley.

The officers then retreated to the other side of the road as the bearded attacker with a shaved head and dressed in a long brown tunic pursued them as horrified bystanders begged police to shoot him.

Khalif again attempted to stab and slash at the officers several times before one policeman unsuccessfully tried to taser him.

His partner then shot the assailant in the chest.

The knifeman clutched his chest and and fell to the ground where he was quickly arrested on the pavement by two plain clothing officers and rushed to hospital under police guard, where he later died on the operating table.

His possible links to known terror plotters and extremist elements of the North African community in Australia are being investigated.

Khalif moved to Australia from Somalia in the 1990s, Victoria Police commissioner Graham Ashton said, and had a record of ‘minor’ offences in relation to ‘cannabis use, theft and driving offences’.

Mr Ashton was asked about reports from eyewitnesses that Khalif screamed ‘Alluha Akhbar’ as he chased pedestrians, to which he could not confirm.

‘He is known to police and is known mainly in respect to relatives he has that are certainly persons of interest.’

Witnesses described a chaotic scene with an injured pedestrian lying on the ground, and numerous police cars and helicopters flying overhead.

‘Police response was swift and overwhelming. I heard at least one gunshot initially,’ one said.

Another said they heard ‘what sounded like a bomb and gun shot’.

‘Roads are blocked and police advising to stay away from Bourke St. Feels like de ja vu,’ they said, referring to the car attack on Bourke Street Mall last year that killed six people.

Panicked pedestrians ran in all directions away from the scene, some hiding in nearby cafes and shops, locking themselves in back rooms.

The area was locked down and the public shooed away while stores including Myer, Target, and David Jones evacuated and the bomb squad was called in to assess the car. 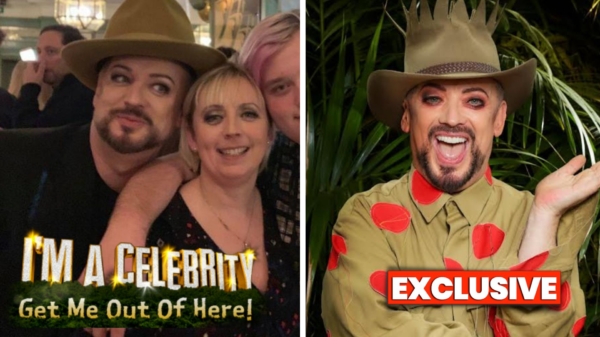 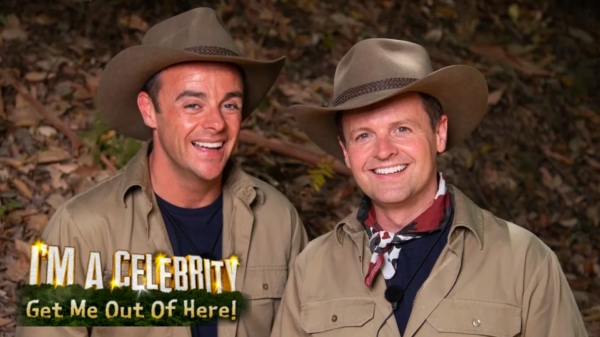 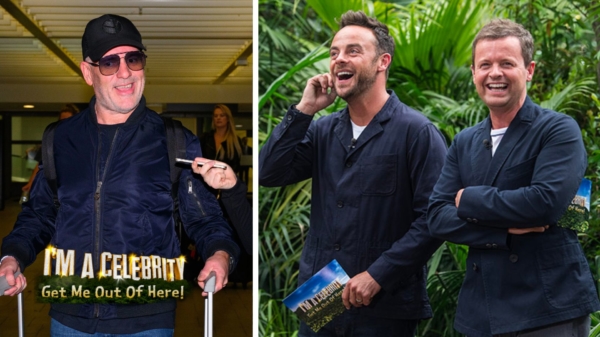