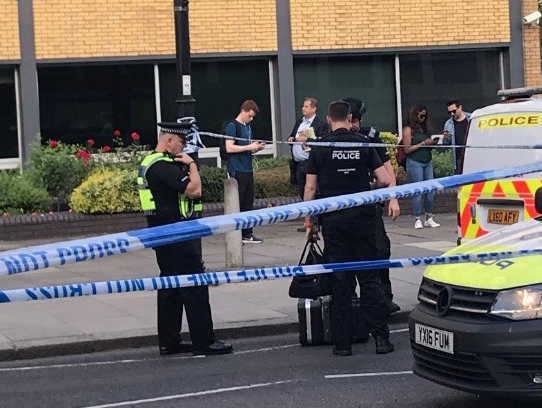 AN EXPLOSION has rocked a London tube station according to reports.

Eyewitness NaK Zokulah on Twitter: “I was at Southgate Station when this commotion started. I could smell burning (like rubber) and saw multiple people hurrying for the exits.”

“I was outside the station about to enter the 125 bus. Do not think this is fear mongering or fake news. It’s very real.”

One witness told The Sun how she heard a “massive bang” as she left the station.

She said: “It was a really loud noise. I was on the top of the escalator and there was this massive bang.

“Everyone was like: ‘What was that?’. Then I heard people screaming. By that point I had stepped off the escalator and was going to tap out.

“I turned around and the whole of the escalator was in flames. It was all so quick.

“Officers are on scene alongside @metpoliceuk. Please avoid the area – we’ll provide updates as soon as we can.”

The Metropolitan Police said in a statement: “Police were called at 7.03pm on 19 June to reports of an explosion and people running at Southgate underground station.

“Met officers remain at the scene along with colleagues from British Transport Police, London Fire Brigade and London Ambulance Service.

“Cordons are in place and the station is closed.

“Enquires are ongoing to establish the cause of the reported explosion, which appears to have been minor.

“We are not aware of any serious injury.”