BACK OFF OUR BOJO! Self-righteous Leftie Luxembourg PM insults Our Boris
Advertisement 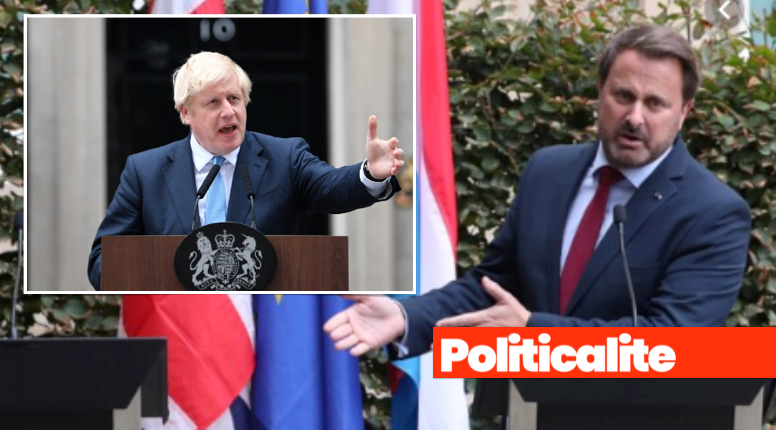 LUXEMBOURG PM Xavier Bettel decided to attack our very own British bulldog Boris Johnson with a press conference that the British Prime Minister chose not to attend – and you can see why.

A rowdy mob of protestors complete with a man with a loudspeaker frothing anti-Brexit invective surrounded the Grand Ducal Palace gates in the heart of Luxembourg City, mere feet from the press conference. Had the UK Prime Minister spoken he would have been drowned out by the howling crowd, turning the press conference into a farce. Was this by accident, or design? The resultant behaviour of Mr Bettel indicated the latter.

Before proceeding with his address, the Luxembourg Prime Minister thanked the raucous rabble with an air of self-satisfied righteousness –

“Thank you very much for listening to me. I think demonstrating is a right in a democracy, and it is important also to be able to exchange and to listen to each other.”

Luxembourg’s Head of Government proceeded to mock the Prime Minister for his decision not to appear, gesturing towards the empty podium next to him. He then accused Mr Johnson of “holding the future hostage for party political games” and reiterated his support for Theresa May’s surrender document, the ill-fated Withdrawal Agreement.

This treatment is a severe diplomatic and personal insult, but why is Luxembourg so keen to humiliate the British Prime Minister and trash his Brexit plans?

Luxembourg was a land ruled and occupied by many different noble houses – Burgundians, Bourbons, Habsburgs and Hohenzollerns. It was made a Grand Duchy after Napoleon’s fall in 1815. Its history dominated by the push and pull of French, German and Dutch monarchs – it has no national heart of its own. Nigel Farage once remarked that Belgium is “a non-country”. Luxembourg easily slips into that category.

And like that other non-country on its northern border, it is massively pro-EU, and that’s understandable – the little land is making a lot of money out of it. It is home to many EU institutions. The European Court of Justice, the General Court, Court of Auditors and the European Investment Bank are all based in Luxembourg City. This means that for every pound that Luxembourg gives to the EU budget, it receives a whopping £34.04 – the top net beneficiary. In stark contrast, the UK receives a measly 38p back for every pound spent. 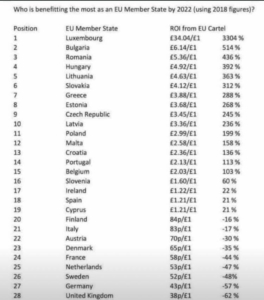 But is Luxembourg, like other EU net beneficiaries such as the former Warsaw Pact countries Bulgaria, Romania, Hungary and others playing economic catch with the rest of Europe? Quite the contrary. According to the World Bank, Luxembourg is per capita the second richest country in the world after oil-rich Qatar.

If Luxembourg was a person, it would be like billionaire Richard Branson receiving a council house along with full disability and child benefit.

So that’s why Luxembourg loves the EU and hates Brexit. Luxembourg is a land that engorges itself on the taxes of the poor of other EU nations, and the tax avoidance of the global super-rich.

Brexit would hit Luxembourg’s Europhile elite hard – no more money from the UK, and a new banking competitor on the block in the form of Britain becoming the Singapore of Europe.

Perhaps Mr Bettel could learn from an English idiom, and not “bite the hand that feeds one.”