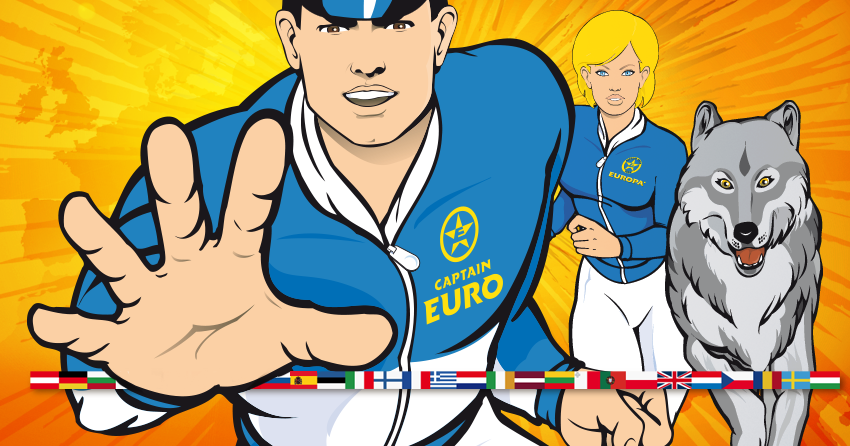 HISTORY was made today as the EU Withdrawal Bill became law as it received Royal Assent. Theresa May hailed a ‘historic day’ as the Bill, despite a rocky passage through Parliament finally made it onto the statute books.

However, the EU propaganda machine in the shape of ‘Superhero’, Captain Euro says that Brexit WILL NOT happen and Britain is staying IN.

The blub for the site describes Captain Euro as the following:

Captain Euro® is Europe’s Superhero and the leader of the European Superforce™, a special missions unit, using direct action to solve security sensitive situations around the world. Together with his ally Europa and his loyal team, they fight evil crime syndicate VIPERA, led by Dr DIVIDER.

Incidentally, I would recommend keeping a sick bag handy if you intend to visit the site. Part of an initiative to build ‘Brand Europe’ it puts the old Soviet organ of ill-repute, Pravda to shame for its Orwellian mendacity in seeking to promote an increasingly defunct bloc.

The Twitter feed connected to the site pumps out constant anti-Brexit propaganda. When questioned by Brexiteer and patriot Cliff Dixon about Brexit, ‘The Captain’ replied:

The sheer arrogance and hubris of these people simply beggars belief. Clearly, the ‘Captain’ and desperate Eurocrats think they can take on over 17 million British voters. This is of course not to mention people across the European continent who are sick to tears of the EU and all it represents. People from right through Eastern, Southern, Central and Northern Europe are all abandoning the ailing bloc in droves. In the opinion of this humble writer, it is long past the time when ‘Captain Euro’ and ‘Team Europa’ hung up their capes and left us all in peace.

POWDER KEG: The Brexit rallies in London herald a new sort of class war
END IT EU FOOL: Appeaser Therersa warned to END immigration or face the wrath of 17.4m voters
To Top