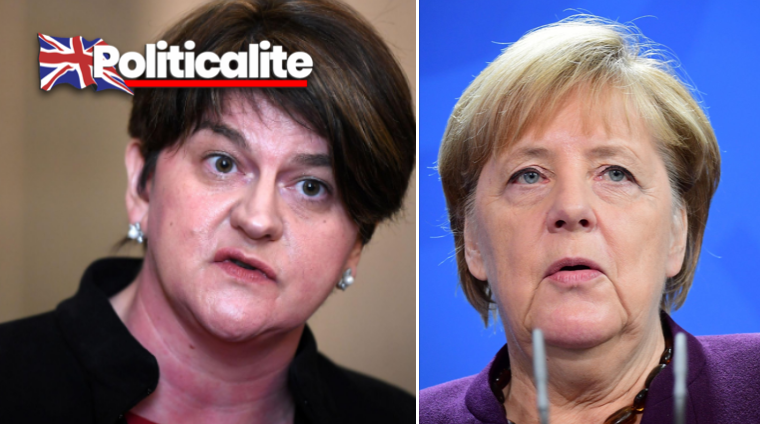 ARLENE Foster has told the EU that any demand to keep Northern Ireland inside the customs union after Brexit would be “beyond crazy”,

The DUP leader was reacting to reports that German Chancellor Angela Merkel told Prime Minister Boris Johnson that a deal would only be possible if Northern Ireland remained in the same customs regime as the Irish Republic.

Ms Foster claimed the EU was not interested in a negotiated outcome.

“The comments from the German Chancellor to the Prime Minister that Northern Ireland must remain in the EU Customs Union forever now reveal the real objective of Dublin and the European Union,” she said.

“For the United Kingdom to be asked to leave a part of its sovereign territory in a foreign organisation of which the UK would no longer be a part and over which we would have no say whatsoever is beyond crazy. No UK Government could ever concede such a surrender

“The EU is not interested in a negotiated outcome at this time.

Their position is the UK can only leave with a deal if it agrees a binding piece of international law permanently tying either the whole country or a part of it to the EU’s legal order over which it has no control.

“The true purpose of the ‘backstop’ is now in the open for all to see. Those who eagerly supported the backstop as the best of both worlds can now see the error of that assessment.

The DUP leader added: “The Prime Minister’s proposals have flushed out Dublin’s real intentions to trap Northern Ireland in the EU Customs Union forever, where Dublin rather than the United Kingdom’s elected representatives would be in the driving seat.

“We will not accept any such ultimatum or outcome.”