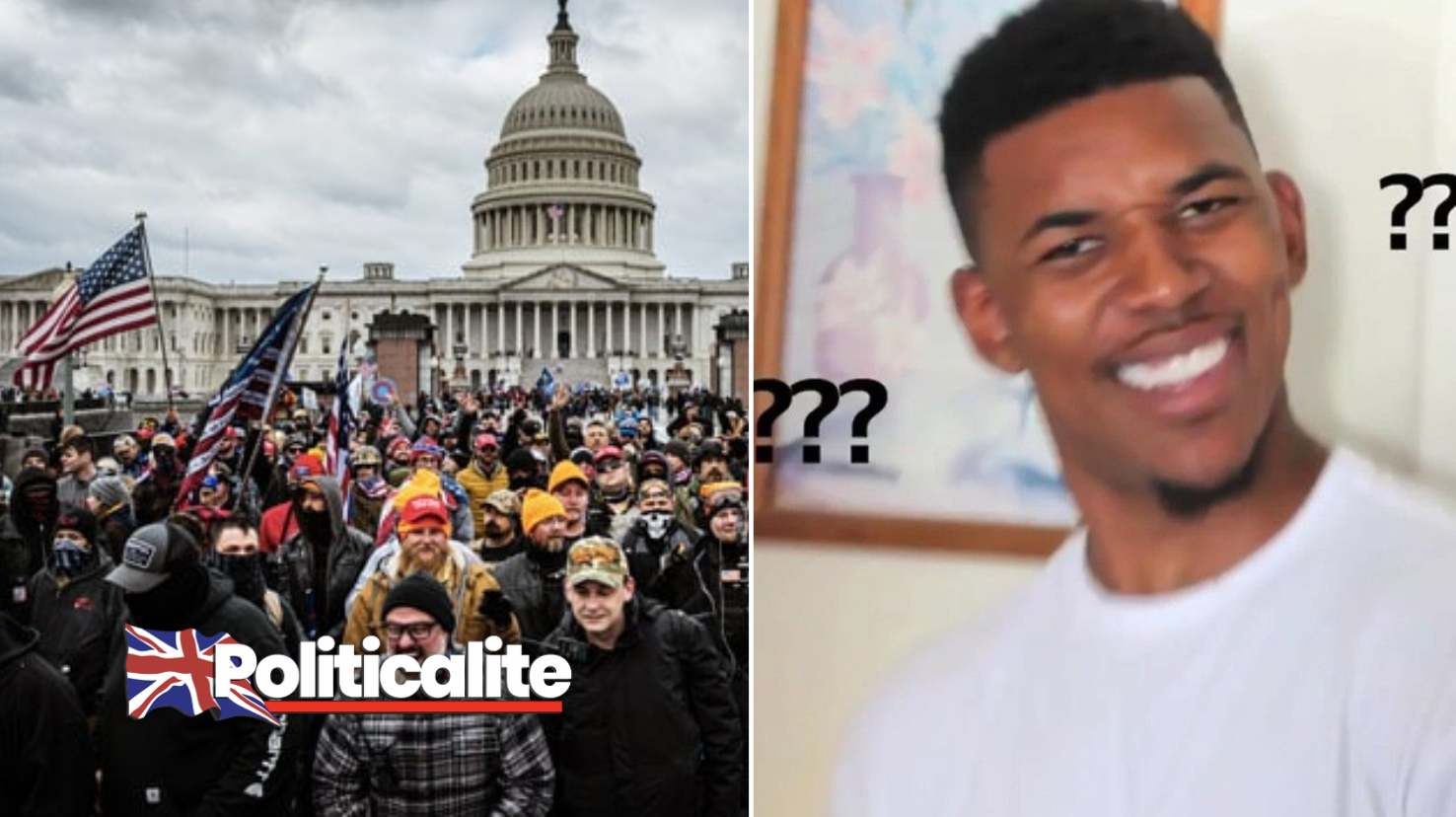 LEFT-Wing Remoaners and public figures have condemned Mr Trump for attacking Democracy… but have attempted to do the same thing by trying to overturn the EU Referendum result for four years.

Politicalite does not condone the vile extremists who attacked the US Capitol but we don’t condone hypocrisy either, which is what this article is about.

Lord Adonis (Labour peer since 2005) – called the events ‘unbelievable’, and heavily condemned for Trump’s supposed role in those proceedings. Adonis has been the most open face in Labour wanting Brexit stopped, all the while stating that the New Year was the date to start the ‘campaign for Britain to rejoin Europe’.

Ian Blackford (Scottish National Party MP since 2015) – Called Boris Johnson’s judgement ‘poor’ for arguing that Trump should receive the Nobel Peace Prize. Has backed a second EU referendum, as well as another one on Scottish

Ben Bradshaw (Labour MP since 1997) – Has retweeted several accounts of the riots like those of Deputy Labour Party leader Angela Rayner and BBC reporter Nick Robinson, critical of Trump, despite him never inciting violence and condemning them afterwards. Bradshaw called for a candlelit vigil to mourn the triggering of Article 50 by Britain in 2017 and was the main spreader of the false conspiracy theory that Russia were behind the Brexit referendum result. Has also joined calls for a second referendum, and defended the People’s Vote campaign.

Stella Creasy (Labour MP since 2010) – Retweeted Hillary Clinton’s anti-Trump tweet, arguing that Republicans should ‘decide today between upholding 244 years of democracy’ or backing a ‘delusional con man’, following those events, with Creasy interjecting ‘what she said’ in the tweet. Also backed a second referendum.

Seb Dance (Former Labour MEP, having served between 2014-20) – Stated that any UK associates of Trump should feel ‘shame’ following the protests. Dance has openly campaigned to stop Brexit, with his pinned tweet going as far to call for the UK to join the EU.

Tim Farron (Liberal Democrat MP since 2005, and former party leader between 2015-7) – Felt that those who were pro-Brexit should condemn the ‘fascist mob in Washington’, by using the ‘respect the will of the people’ slogan often used by Brexiteers. He backed a second referendum, making that the party’s big issue during the 2017 General Election campaign, whereby he lost and resigned swiftly as party leader after that. Despite this, he still remains an MP.

Sadiq Khan (Labour Mayor of London since 2016) – called the riots ‘deeply disturbing scenes’ and the mostly peaceful protestors all ‘extremists’, on his Twitter Khan had a major hand in the People’s Vote campaign, giving various speeches at their events. Khan also admitted back in 2018 to have had a major hand in allowing the far left Stand Up To Racism group close down the democratic Lewisham East by-election hustings, of which fellow London Assembly member David Kurten felt had undermined democracy.

David Lammy (Labour MP since 2000) – Condemned Trump, and highlighted a clip whereby Johnson once claimed that Trump was a ‘suitable candidate’ for the Nobel Prize. Lammy had been very pro-second referendum, going to People’s Vote events and calling the European Research Group ‘Nazis’, and only doubled down on that line when he was asked. Unlike most here, Lammy has shown some self-awareness, calling Conservative London Assembly leader Susan Hill as ‘appalling’ for making a similar comparison, feeling one couldn’t ‘equate’ an ‘armed and violent assault’ to ‘campaigning for a democratic vote on Brexit’. Given that Lammy and his ilk had the political machine and the media behind them as opposed to a few stragglers, that is definitely on point.

Caroline Lucas (Green Party MP since 2010) – Called the events an ‘attempted coup’, sharing a Guardian article she penned on the topic, despite Trump not being involved and having condemned the behaviour of the riots. Supported the People’s Vote campaign, and was one of the various MPs who had attempted to stop the proroguing of Parliament by Boris Johnson, which was done to avoid pro-Remain MPs from sabotaging Brexit.

Theresa May (Conservative MP since 1997 and former Prime Minister from 2016-19) – called the events ‘disturbing’ and that there was ‘no place for the rule of the mob’. May had been heavily criticised during her time as PM for getting a Brexit deal of which many considered a ‘Brexit In Name Only’, and had entertained the idea of a second referendum to get her EU withdrawal deal through. This led to her resignation as PM, with many pro-Brexit Cabinet Ministers abandoning her after that.

Caroline Nokes (Conservative MP since 2010) – the events were an ‘affront to democracy’. Nokes had backed a second referendum in Conservative Party, and was a part of the 21 Tory MPs who had their whip removed by Boris Johnson in 2019 for not backing a no-deal Brexit. She currently has the whip restored.

Anna Soubry (former MP of both the Conservative and Change UK parties from 2010-9) – Condemned Trump as a ‘ruthless narcissist’ and called for ‘social democrats & liberals’ to ‘step up & see off his like’ following the riots. Became one of the most Remoaner MPs in Parliament, calling for a second referendum, joining the People’s Vote marches and also left the Tory Party to join Change UK, of which she later led, due to her opposition to the party’s increasingly pro-Brexit views. Lost her seat of Broxtowe later that year in the General Election.

Sir Keir Starmer (Labour leader since 2020, and MP since 2015) – called the riots ‘horrendous scenes’ and called it an overall ‘direct attack on democracy and legislators’. Starmer was a supporter of the People’s Vote campaign, and was behind the policy of a second referendum on the EU for the 2019 Labour manifesto, of which directly led in part to their annihilation in that General Election that year.

Wes Streeting (Labour MP since 2010) – Retweeted a statement by the Jo Cox Foundation on the riots, feeling that the readers of it shouldn’t be a ‘bystander’ when it comes to protecting democracy. Streeting supports a second referendum.

Nicola Sturgeon (Scottish National Party First Minister for Scotland since 2014, and MSP since 1999) – called the behaviour ‘utterly horrifying’, and decried ‘shame on those who have incited this attack on democracy’. Also gave her support to the People’s Vote campaign, insinuating that because Scotland didn’t vote to leave, they shouldn’t have to. Also is seeking another Scottish Independence Referendum, having lost the first one freely and squarely.

Emily Thornberry (Labour MP since 2005) – Condemned Conservative Prime Minister Boris Johnson for not giving Trump ‘direct criticism’ for his alleged ‘incitement’ for those events, calling him a ‘shameful sycophant’. Thornberry was one of the loudest voices of the second referendum campaign, criticising her then party leader Jeremy Corbyn for losing the 2019 EU Elections for not standing on that issue, as well as wearing a pro-EU dress during a march in Labour’s conference in Brighton that year, of which her former Labour colleague George Galloway called her ‘Lady Nuggie’ for, during a recent podcast.

Mitch Benn (author) – Felt that the protestors were ‘right wing thugs’, and that the only reason Britain’s ones weren’t ‘storming Parliament’ is because they were given ‘everything they want’. Writes for the New European.

Alastair Campbell (former civil servant for the Blair government between 1997-2003) – Felt that the events were unsurprising, sharing an article on the matter. Backed a second referendum, going as far as to be the editor of The New European newspaper, which backs that position between 2017-2019.

Jonathan Freedland (Guardian columnist and journalist since 1993) – Mocked Trump condemning the violence, feeling it was a way to avoid being removed from office early. Also has written for the New European.

Bonnie Greer (playwright and former curator at the British Museum) – Self-confessed ‘Never Trumper’ Bonnie Greer retweeting the aforementioned Dance’s comments, all the while telling her followers to ‘remember’ British supporters of his, like Nigel Farage and Piers Morgan. She backed a second EU referendum. Has written several articles and columns for the aforementioned New European newspaper, which backs the UK rejoining the EU at some point.

Armando Iannucci – Compared Trump to a ‘mobster’, retweeting Democrat Senator Chuck Schumer in it, and felt he should be got on ‘income tax’, similar to the mobsters Mickey Cohen and Al Capone. Backed the People’s Vote campaign.

Owen Jones (Guardian columnist since 2014) – Called the events a ‘coup’ on his YouTube channel, despite no evidence of Trump being involved in the violence, and condemning it afterword. Backed a second EU referendum, all the while admitting it wouldn’t a ‘good choice’ for the Labour Party, of which he’s a loyal member.

Gary Lineker (Match Of The Day pundit since 1999) – Felt that no-one should support Trump, after the events that took place. Called for a second EU referendum, and backed the People’s Vote campaign.

Paul Mason (political commentator) – Called the events a ‘fascist attack’ on Congress, and openly supported Antifa, a far left terrorist organisation, as described by the state of New Jersey and President Donald Trump. Backed a second EU referendum, calling on his party to ignore the supposed Labour voters who ‘hate blacks, women and gays’ – as in those against mass immigration and the EU – in order to win that vote.

Deborah Meaden (Businesswoman and Dragon’s Den host since 2006) – Called for Twitter to ban President Trump after the events. Backed the People’s Vote campaign.

James O’Brien (LBC host since 2019) – Condemned the violent behaviour, but called it ‘predictable’ due to way the Trump administration had gone up to that point. Backed a second EU referendum, and also pushed the false conspiracy theory that Russia was involved in the Brexit campaign.

Ash Sarkar (contributor at Novara Media since 2011) – Called the events an ‘attempted coup’. Backed a second EU referendum, and criticised someone on Twitter for pointing this out to her.