IT WILL NOT WORK: EU 'sides' with Brexiteers and insists May's Chequers plan is DOOMED!
Advertisement 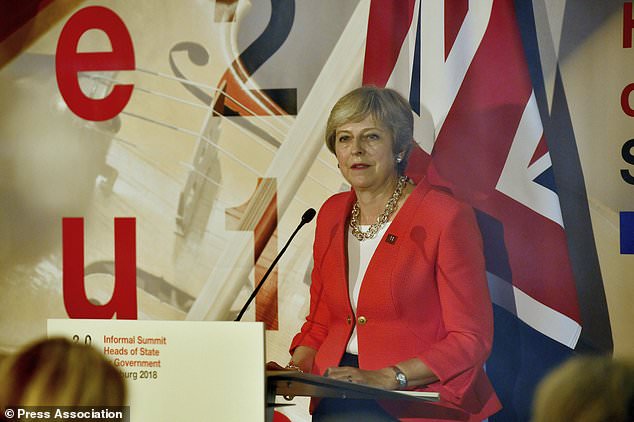 THERESA May was left humiliated in Europe yesterday after European leaders said her doomed Brexit plan also known as the “Chequers Deal” insisted that the plan “will not work” at a summit of EU27 leaders.

Still, the stupid and stubborn woman who has alienated half the country, and her OWN party over Chequers and STILL WON’T drop it said that her doomed plan is the ONLY proposal on the table and as the deadline approaches, it looks like Britain is heading for a ‘No Deal.”

Speaking at the end of a two-day EU summit in Austria – during which she had a meeting with Irish counterpart Leo Varadkar – Mrs May said the UK will “shortly” come forward with new proposals on the so-called “backstop” arrangements for implementation at the border if no long-term solution is found.

Mrs May, who also held “frank” face-to-face talks with European Council president Donald Tusk at the informal Salzburg summit, insisted Chequers is the “only serious and credible proposition” for an overall deal.

But Mr Tusk said the 27 other EU leaders had agreed the plans need to be redrawn.

“Everybody shared the view that while there are positive elements in the Chequers proposal, the suggested framework for economic co-operation will not work, not least because it is undermining the single market,” he said at the conclusion of the two-day meeting.

– French President Emmanuel Macron said leaders of the Brexit campaign who told British voters it would be easy were “liars” and leaving the EU was “not without costs”.

– Dutch Prime Minister Mark Rutte said his country is better prepared for a no-deal Brexit than Britain and an agreement is “not easy” because of Mrs May’s red lines.

The next major milestone in the Brexit process is fast approaching, with the October 18 summit labelled a “moment of truth” by Mr Tusk.

An additional Brexit summit could be held in November, but only if a deal is within reach.

Mr Tusk said: “In October we expect maximum progress and results in the Brexit talks and then we will decide whether conditions are there to call an extra summit in November to finalise and formalise the deal.”

At a news conference at the conclusion of the summit, Mrs May struck a defiant tone, saying she had always expected negotiating “tactics” to be used during the course of the Brexit process.

She has flatly rejected a European Commission backstop proposal for Northern Ireland to remain within the EU customs area after Brexit, arguing this would draw a border down the Irish Sea.

Speaking after her meeting with Mr Tusk, the PM said: “We both agree there can be no withdrawal agreement without a legally-operative backstop. But that backstop cannot divide the United Kingdom into two customs territories, and we will be bringing forward our own proposals shortly.

“On the economic partnership, there is no solution that will resolve the Northern Ireland border which is not based on the frictionless movement of goods.

“Our White Paper remains the only serious and credible proposition on the table for achieving that objective.”

With the Chequers plan facing resistance from the EU and a bitterly divided Conservative Party, a no-deal Brexit remains a potential outcome.

Mrs May said: “Let nobody be in any doubt: as I have always said, we are preparing for no deal, so that if we get to the position where it’s not possible to reach a deal then the British people can be confident that we will have done what is necessary to ensure we make a success of leaving the EU, regardless of the terms on which we do so.”

Mr Tusk insisted that despite the EU’s reservations about the Chequers plan, he is “a little more optimistic” about the prospect of a “positive outcome”.

But “unfortunately we cannot at this stage exclude a no-deal – it depends on both sides of negotiations”.

Earlier, the leaders of the Czech Republic and Malta had suggested a second referendum should be held to give the British people the chance to rethink Brexit.

But Mrs May restated her position: “We are going to leave the European Union, we will leave on March 29, 2019 and there will be no second referendum.”

She received support from controversial Hungarian Prime Minister Viktor Orban, who claimed that while some EU leaders want to “punish” the UK for its choice, he wants a “fair” Brexit deal.

Jacob Rees-Mogg, leader of the influential European Research Group of pro-Brexit Tories and a prominent critic of the Prime Minister’s plan, summed up events in Salzburg by tweeting “Chequers goes pop” with the hashtag #ChuckChequers.

Shadow Brexit secretary Sir Keir Starmer said: “It has been clear for weeks that Theresa May’s Chequers proposals cannot deliver the comprehensive plan we need to protect jobs, the economy and avoid a hard border in Northern Ireland.

“With just weeks to go until a deal must be struck, the Prime Minister cannot keep ignoring this reality.”

“The UK Government must demonstrate a resolute determination not to be bullied.”

Mr Dodds reiterated the DUP wants to preserve the political, constitutional and economic “integrity” of the UK, describing this as an “absolute priority”.

Parts of this article courtesy of the Press Association.

In this article:brexit, Chequres, EU, featured, theresa may, Tories, UKIP