SITTING DUCK: The Clock Is Ticking On Theresa’s May’ Days in No.10
Advertisement 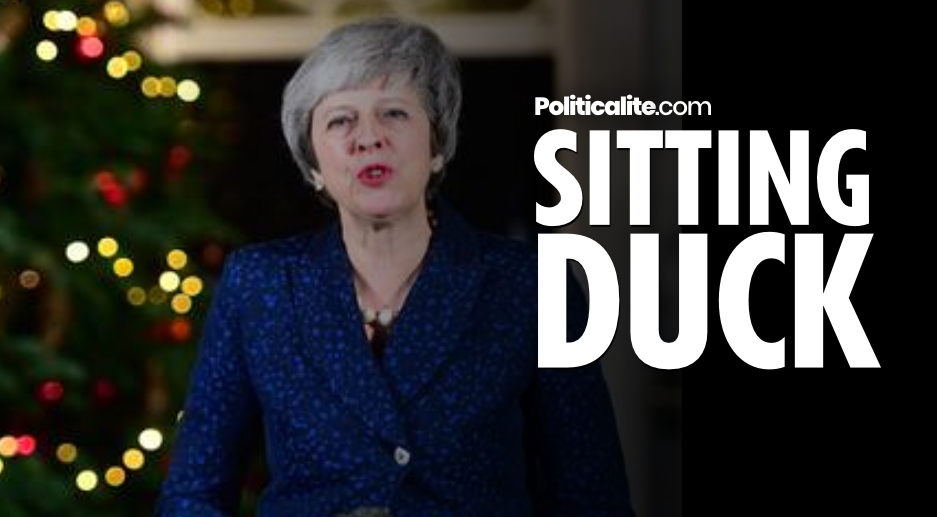 APPEASER Theresa May have scraped through the vote of no confidence last night but it was nowhere near the victory that she might have been hoping for.

In fact, it was quite the opposite.

With a third of the voters receiving the Queen’s shilling and on her payroll they were never going to vote against her, that would have been like a turkey voting for Christmas.

So of the remaining, two hundred or so MP’s over half of them voted against her which is hardly a position of confidence.

What it has done is expose many of the Tories who said they were going to vote for her to be downright liars.

These politicians that are running our country are not to be trusted.

The theatre continues today as the sitting duck travels to Europe again trying to get concessions out of out of touch leaders who have already warned the worst Prime Minister in history that there will not be any concession and there is no room for future talks or negotiations.

It is evidently clear that Theresa’s deal will not be passed in Parliament, she will not get it through and reports amongst political analysts suggests that fewer than two hundred MP’s will vote for her Brexit fraud.

Theresa May may have won the vote last night, only doing so by promising not to stand for re-election which is a sorry state of affairs in itself, but she is now a rabbit in the headlights, a lame duck who is skating on very thin ice and is living on borrowed time.

It is a case now of when, not if her tenure will come to an end because it’s almost certainly in the post.

In this article:Analysis, Comment, featured, Ian Adamczyk, theresa may, Tories