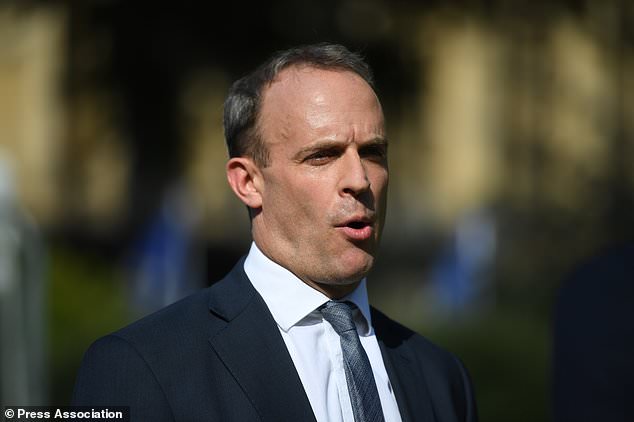 Challenged about the warning from the seafood sector that fishing businesses could collapse within days, Mr Raab said he was “not convinced” it was because of the Government’s trade deal with the European Union.

Exports of fresh fish and seafood have been severely disrupted by delays since the UK’s transition period ended on December 31.

Some Scottish fishermen have been landing their catch in Denmark to avoid the “bureaucratic system” that exports to Europe now involve, according to Scotland’s Rural Economy Secretary Fergus Ewing.

On land, lorries transporting freshly-caught produce have been held up at distribution hubs and many have struggled to enter into France – a situation which First Minister Nicola Sturgeon described as “shameful and disgraceful”.

On Wednesday, Prime Minister Boris Johnson told a committee of MPs that fishing businesses would be compensated for what he described as “temporary frustrations”.

Asked about the potential collapse of parts of the fishing industry because of problems caused by the Brexit deal, Mr Raab said: “I’m not convinced that that is the result of the agreement.

“Of course we have always said as we leave the transition period with a deal, but even more if we hadn’t found a deal, there will be some teething problems.

“We are very focused on working with all the different sectors, including the fishing industry, to resolve any of these teething problems.”

Liberal Democrat MP for Orkney and Shetland Alistair Carmichael said: “It’s hard to find a minister who will admit to having even sat down and read the trade deal.

“Brexit might be a game to the likes of Dominic Raab and Boris Johnson but for thousands of people in Scotland this is their business and their livelihood on the line.

“The Government needs to get a grip now.

“Fishermen are telling the PM that his deal did not do any of the things he claimed for it, let alone what he had promised.

“The harder the Tories spin, the angrier fishing communities get. The Government needs to start listening to the people who know what they are talking about and start to clean up the mess that the Prime Minister has created.”

Luke Pollard MP, Labour’s shadow environment secretary, responded to Mr Raab’s comments, saying: “The Government should stop blaming the fishing industry and start taking responsibility for the mess it has created by its own incompetence.

“Fishing businesses from Shetland to Penzance are crying out for help but all the Government can offer them is excuses and blame.

“With reams of new red tape they promised they would remove, Ministers are holding British businesses and our economic recovery back.

“They should close the loopholes in their deal, and come up with the investment our coastal communities have long been promised.”