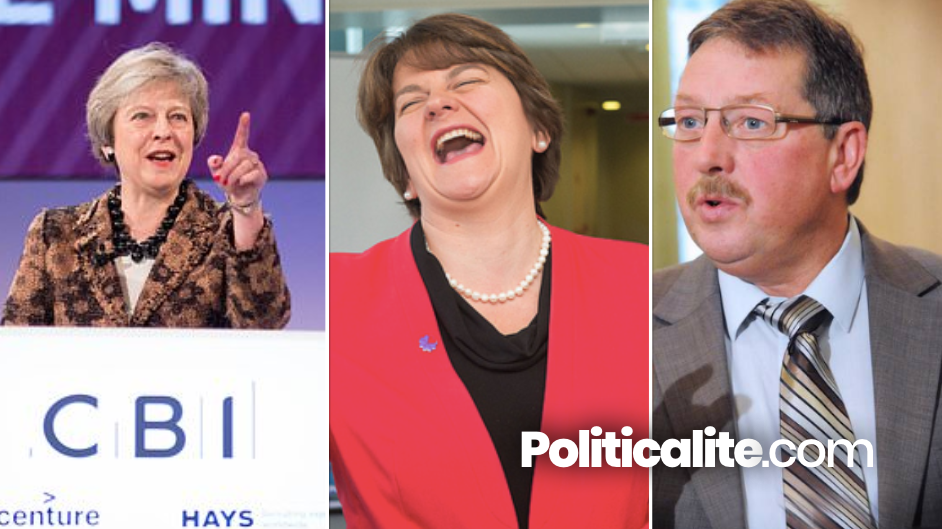 THERESA May’s deal with the DUP was officially ripped up last night as her £1bn ‘confidence and supply’ deal with Northern Irish MPs came crashing down.

They accused the Prime Minister of breaking a fundamental promise on Brexit.

The party joined with Labour to cut the Government’s majority to just five in a Commons vote on the Budget.

They also abstained on a series of other amendments to the Finance Bill on Monday night in a move intended to send a “political message” to Prime Minister.

Their actions have now revealed that the “confidence and supply” arrangement with DUP MPs that props up the minority Conservative Government is worthless.

Under the terms of the deal, agreed after Mrs May lost her Commons majority in last year’s general election, the Northern Ireland party is required to back the Government on Budget matters and on confidence votes.

DUP Brexit spokesman Sammy Wilson said Mrs May’s deal with Brussels breached a “fundamental” assurance that Northern Ireland would not be separated constitutionally or economically from the rest of the UK.

“We had to do something to show our displeasure,” said Wilson.

“All of them were designed to send a message to the Government: ‘Look, we have got an agreement with you but you have got to keep your side of the bargain otherwise we don’t feel obliged to keep ours’.

For Labour, shadow cabinet office minister Jon Trickett said the DUP’s withdrawal of support on a Budget measure raised questions as to how long the Government could carry on in the face of widespread opposition to her Brexit deal.

“We no longer have a functioning government. With Brexit only a few months away something has got to give,” he said.

The DUP warning adds to the pressure on the Prime Minister just as a move to unseat her by Tory Brexiteers appeared to have stalled.

Members of the Conservative European Research Group were last week confidently predicting they would get the 48 letters of no confidence needed to trigger a vote in her leadership.