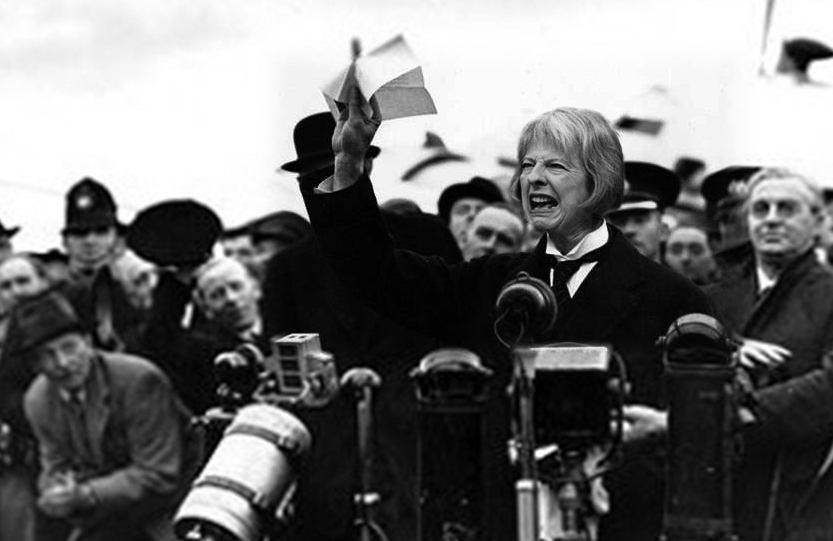 BRITAIN is slightly miffed with Theresa May’s Brexit deal. I realise that may be the understatement of the century but the message is clear, May’s Brexit to many, is simply not a real Brexit.

Many are unhappy with May’s Brexit withdrawal agreement, due to May’s ‘negotiation’ style, which some view as bordering on a policy of appeasement.

A comparison further highlighted by an LBC radio interview with the PM in which one caller compared her to pre-Second World War PM Neville Chamberlain, who famously appeased Nazi Germany, and through negotiations with Hitler in 1938, returned to Britain declaring “Peace for our time” whilst joyfully waving aloft his signed agreement with Hitler, and well…..we all know how well that turned out.

May has undermined the nation she leads and sold its people down the river.

Through May’s withdrawal agreement, should it pass through parliament, Britain would be locked into the Single Market and Customs Union during a 21 month transition period starting on 30/03/2019 (possibility of extension till 2022) in which everything would essentially stay the same but Britain would no longer have a voice in the European Parliament or Commission.

During this time frame, Britain would essentially be a slave state, an EU colony, having to accept all EU rules and diktats with no way of opposing/altering them. This state of affairs clearly fulfils the 1st and 2nd definitions of treason, given that May has agreed that the Sovereign (British electorate) who are given a voice through parliament (their elected representatives) would be unable to decide upon Britain’s laws and policies, but be subject to unwanted foreign influence with no say whatsoever. A betrayal of ones country.

Even worse, once the transition period ends, if no trade agreement is reached, the Northern Ireland backstop comes into force, designed to keep the border between Northern Ireland and the Republic of Ireland friction-free. A scenario that would see the UK leave the Single Market but remain in the EU’s Customs Union, over which once again we would have no say. Furthermore, Northern Ireland would be treated differently from the rest of the UK as it would remain in some areas of the Single Market, thus creating a soft border down the Irish sea between mainland Britain and Northern Ireland, essentially cutting off a limb from the UK’s body, so to speak. Also, Britain would need the EU’s permission to leave this arrangement, something they would of course, never give. Once again, a betrayal of ones country. Oh, and have I mentioned that May would be giving away £39 Billion of taxpayers money for the privilege of national subjugation. Again, a betrayal of ones country.

Clearly Mrs May is engaged in undermining her own nation to the advantage of a foreign power. She is betraying Britain and North Ireland. She is betraying her country and the Brexit vote, or in other words, ignoring the largest democratic mandate (17.4 million votes) in our nations history. However, most of all, she is betraying the sovereign people of Great Britain of whom she has pledged to serve. Our only hope for freedom and an open and fair democracy is for MPs to reject this embarrassing agreement and steer Britain towards a brighter future of a WTO Brexit, or in other words, full control of our money, borders and laws, whilst saving the treasury £39 billion that could be better spent on our public services, and avoid indefinite colonial status for our green and pleasant land.

In this article:Appeasement, brexit, Comment, EU, Josh Barrow, theresa may