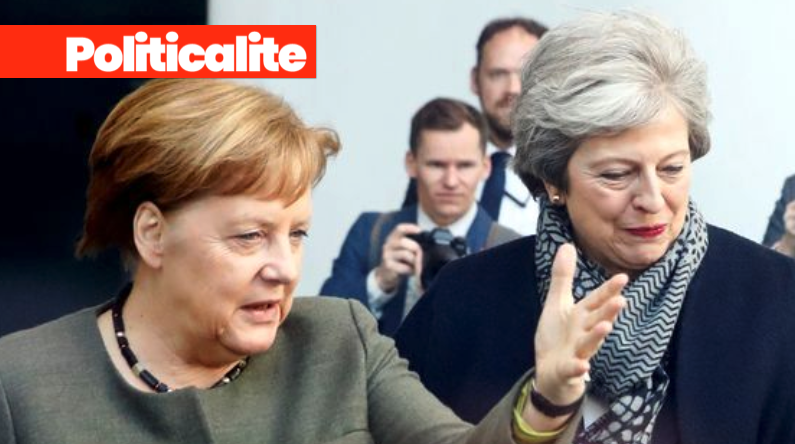 VERRAT Mai, (that’s German for ‘Treason May’) travelled to Berlin today to beg the real leader of the EU, long-serving dictator Angela Merkel for an extension to Brexit, despite the majority of Brits opposing such a move, and wanting a No Deal Brexit… NOW. 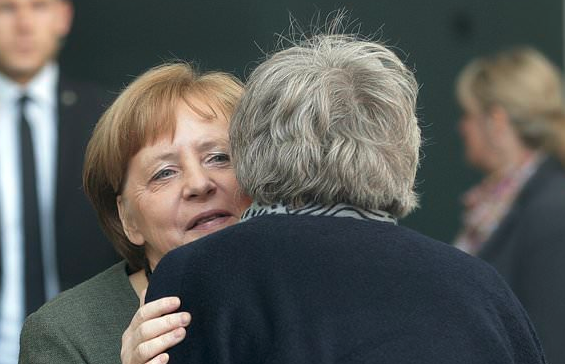 May arrived in Berlin to ask Merkel to back her case for a delay to Brexit.

The PM will then fly to Paris, where she faces the tougher task of winning the support of French President Emmanuel Macron, who has warned in recent days that an extension to the Article 50 withdrawal process is not guaranteed.

The visits came as the EU’s chief Brexit negotiator, Michel Barnier, said Brussels could amend the Political Declaration on future relations with the UK “within a few hours or days” to incorporate the customs union arrangement being discussed in cross-party talks between the Government and Labour.

May’s Cabinet are openly at war with the Prime Minister, with International Trade Secretary Liam Fox warning that a customs union would leave the UK “stuck in the worst of both worlds”.

Mrs May has asked for the date of Brexit to be delayed until June 30 at Wednesday’s summit, with the possibility of an earlier departure if the UK’s withdrawal deal is ratified.

The unanimous agreement of all 27 remaining EU states is needed to avoid a no-deal Brexit on the scheduled date of April 12.

Ms de Montchalin warned that “the position of France has not changed” and that the EU27’s approval of Mrs May’s request is “neither settled nor automatic”.

In a clear sign of opposition to concessions to Labour’s demands, Dr Fox sent a letter to the chairman of the Tory backbench 1922 Committee setting out in detail his opposition to a post-Brexit customs union.

The letter, obtained by the Daily Telegraph, warns that such an arrangement would leave the UK unable to set its own trade policy but forced to open its markets to any country with which the EU struck a free trade agreement.

“In such a scenario the UK would have a new role in the global trading system – we ourselves would be traded,” he told Sir Graham Brady.

“As the famous saying in Brussels goes, if you are not at the table, you are on the menu.”

Leader of the Commons Andrea Leadsom urged Mrs May to ask Mrs Merkel to reopen the Withdrawal Agreement forged with the EU last November – something the EU has repeatedly said it will not do.

Mrs Leadsom told ITV News: “The Prime Minister is off to see Angela Merkel today and it would be fantastic if Angela Merkel will try to support a proper UK Brexit by agreeing to reopen the Withdrawal Agreement.

“There have been rumours over the weekend some senior members of the German government would be willing to do that in order to get Theresa May’s deal over the line.

“As the person with the responsibility to get the legislation through, if we get the Prime Minister’s deal over the line because the EU has decided to support measures on the backstop, that would be the best possible outcome.”

But Mrs May’s official spokesman dismissed the idea, telling reporters: “Any plan going forward would be based on the current Withdrawal Agreement.”

And Mr Barnier told a press conference in Luxembourg: “The Withdrawal Agreement is not going to be reopened, is not up for negotiation again. That continues to be the case.

“The Political Declaration, which will set the framework for future relations, can be improved, we can provide an increased level of ambition if that is the wish of the UK.

“These ambitions for the future relationship, which could – for example – consist of adding to the free trade agreement on which we have agreed with the UK already a customs union, a genuine customs union.

“We are willing to improve and amend the Political Declaration rapidly, within a few hours or days.”

Mr Barnier said he hoped that Mrs May’s decision to speak to Labour would allow “a new process to emerge in the House of Commons and ultimately for a new majority to emerge with regard to the Withdrawal Agreement and Political Declaration”.

He added: “This is what would provide meaning to the request which the UK Prime Minister has submitted for an extension.”

But Germany’s deputy foreign minister, Michael Roth, said that, despite the opening of cross-party talks, “so far absolutely nothing has changed” and “we are in a very, very frustrating situation here”.

Mr Roth warned: “Within the European Union, there isn’t an endless readiness to keep talking about delays so long as there is no substantial progress on the British side”.

The latest round of talks included Mrs May’s de facto deputy, Cabinet Office minister David Lidington, and Chancellor Philip Hammond from the Government side, with shadow Brexit secretary Sir Keir Starmer and shadow chancellor John McDonnell from Labour. The talks will include an informal lunch.

Mr McDonnell said Labour would be pressing for assurances that any agreement could not be torn up by a future prime minister, such as Boris Johnson.

“Some of that discussion that will take place will be about how any deal is secure for the long term and how best to secure that either through domestic legislation or treaty,” he said.

Justice Secretary David Gauke said the talks were taking place in a “constructive manner” but it was too early to say whether they would reach an agreement.

He accepted there would need to be “flexibility from all sides” to reach a resolution.

Mr Gauke played down a report that Mrs May was considering offering MPs a vote on whether to hold a confirmatory referendum on any Brexit deal that was agreed.

“In the discussions I have had with the Prime Minister she had made it very clear that she doesn’t want a confirmatory referendum,” he told BBC Radio 4’s Today programme.

MAYDAY! Brexit talks between May and Corbyn COLLAPSE, PM begs EU for DELAY to Brexit
COMMENT: It’s Clear Mrs May Is Putting ELITES before 17.4m Brexiteers
To Top