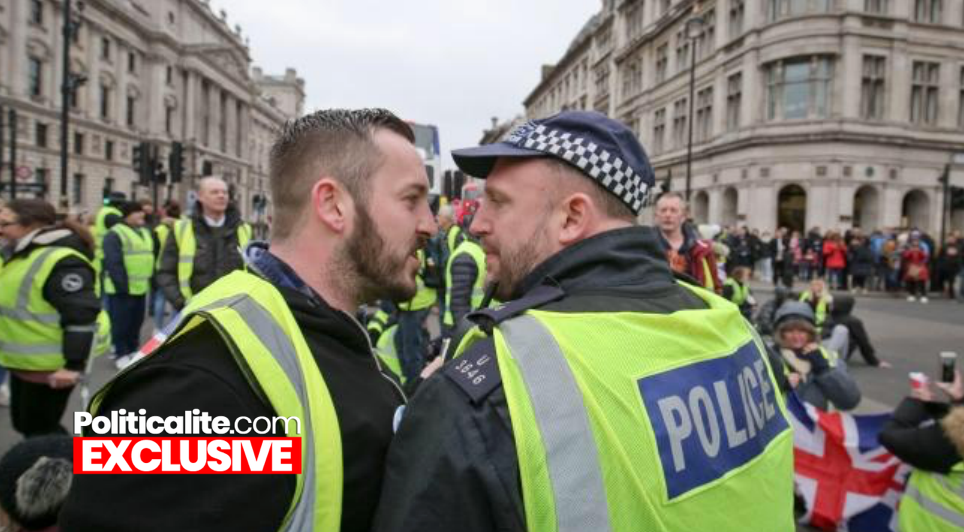 YELLOW Vest activist James Goddard became the latest political figure to have his YouTube channel demonetised yesterday as free speech and freedom of expression continues to take a battering in the UK.

It is no coincidence that James is due in court again next week and the establishment is trying to squeeze his revenue stream, just like they have done to Tommy Robinson and Politicalite.

The establishment purge against him, like many others, continues after Murdoch owned TalkRadio alerted YouTube to content on James’ channel that he posted over a year ago.

In the first video, James was in conversation with a Muslim man at his stall in Manchester, the man refused to engage with James and wouldn’t answer any of his questions but then called the police claiming he felt distressed.

James responded by claiming he felt distressed by the Muslim man’s “hate speech” that went unchecked by the police.

The second video related to James approaching London Mayor Sadiq Khan who has overseen record levels of knife crime, murders and gang culture that has spread like the plague across the capital. 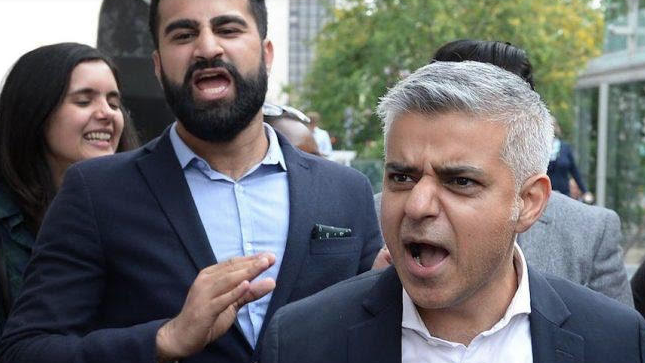 Khan, a man known to have shared a platform with an imam who was a renowned recruiter for Al Qaeda was a former human rights lawyer before entering politics, had also previously consulted Moussaoui.

Zacarias Moussaoui pleaded guilty to being involved with the 9/11 terrorist attacks in New York telling the court “I Moussaoui Zacarias, in the interest to preserve my life, enter with a full conscience a plea of guilt, because I have the knowledge and participated in Al Qaeda”.

During his time as a human rights lawyer, Khan defended radical Islamists and self-confessed terrorists, also defending hate preacher and leader of the Nation of Islam Louis Farrakhan. 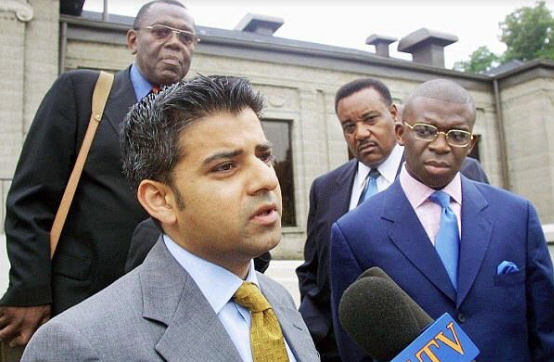 In 2002 Khan argued that Farrakhan should be granted entry into the UK to be able to tour the country, this is the same Sadiq Khan than attempted to block US President Donald Trump from visiting the UK after his successful election campaign in 2016.

Goddard told Politicalite: “In demonetising my videos, YouTube has taken the decision to act as a publisher rather than a platform.”

“In acting as censor they have in effect become ethically responsible for the content on their platforms. This will inevitably include all content and not just my own.”

“If another video is allowed to earn money that is later deemed as “hateful” then YouTube will be responsible for it, even directly accountable for it. And they need to review all Youtube content. This is unlikely to take place as there is too much content to review.”

“Therefore it would appear they are making subjective decisions about censorship that is in the corporate interest rather than for the public benefit.”

But from the outset, it does not appear that their censorship works both ways as it is, more often than not, only right-wing conservative views that they take exception with whilst the left is given free rein and goes evidentially unchecked.

It appears that YouTube has now joined the likes of social media giants Facebook and Twitter in banning and removing content that is associated with ring-wing conservative views. They have made subjective decisions relating to censorship that is in the interest of political and corporate censorship rather than it being in the public interest.

In an article that was posted yesterday by Rupert Murdoch puppet Holly Pyne on talkRadio.co.uk bullet points appear within the article asking “Who is the yellow vest protestor who hounded Anna Soubry”?

Further down the article in their “Top Picks” section, James is pictured below a photograph of the Christchurch gunman in New Zealand which is a deliberate, misleading and abhorrent attempt to tie the two together and to get you to think that these people are connected. 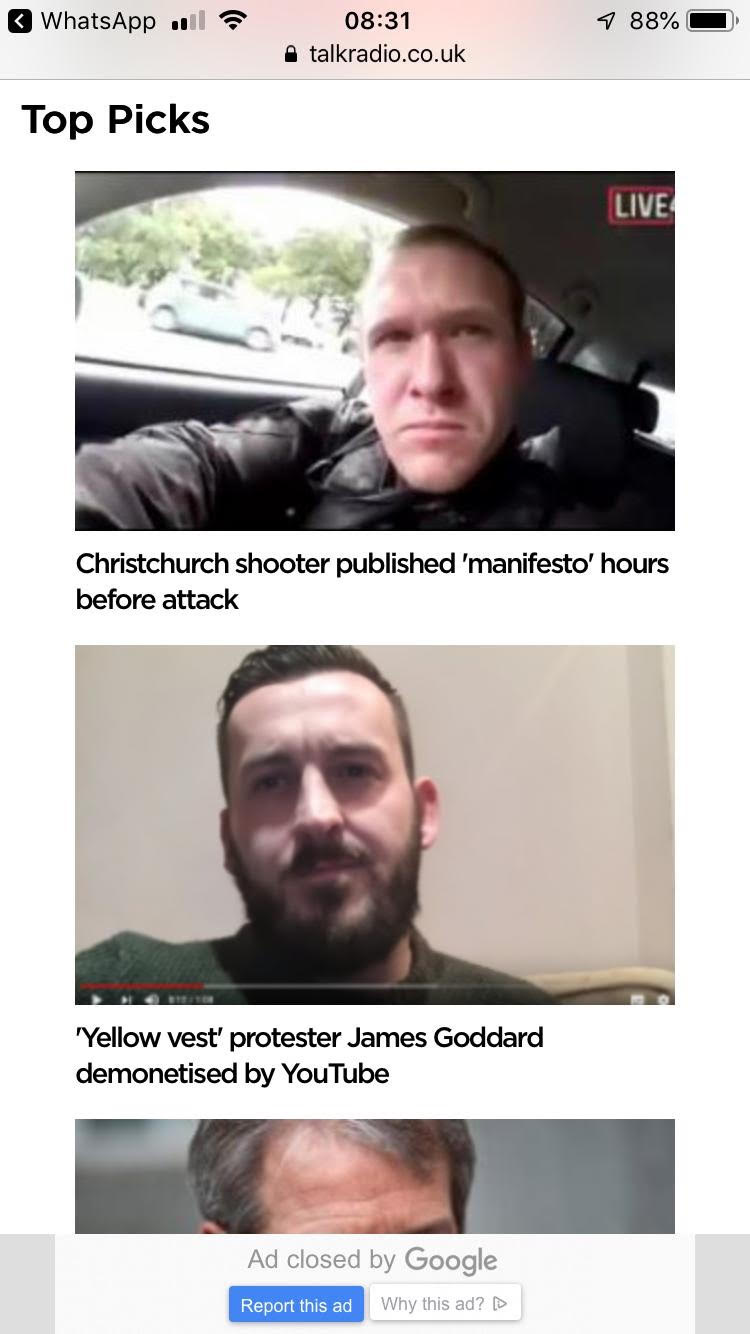 Scroll down her article a bit further and references to James’ impending court cases are seen, this is designed to lead the general public into believing that he has done something wrong, he hasn’t, he approached a politician that is openly standing against her constituents and trying to thwart Brexit completely. That’s a traitor in my book too.

Pyne also notes that James is a regular at Speaker’s Corner in London’s Hyde Park and he claims that the UK Government is corrupt.

Below James in the same article is also a photograph of Conservative Brexiteer MP Owen Paterson.

This is how the mainstream media operates, their sole intention is to manipulate your mind and influence how you think rather than actually delivering the news or telling you the truth.

James Goddard was not hounding Anna Soubry, he simply approached her to ask her why she was standing against her own constituents and to see why she referred to Brexiteers as “racists and fascists”

It is NOT “Hate Speech” to speak the truth or to stand up against the establishment narratives.

Anyone that works for Rupert Murdoch and his global media empire is a puppet, they are not journalists because they are not free to express themselves and instead, have to peddle his globalist agenda.

We reported last week that Murdoch’s son actually donated to the Clinton Foundation so anyone that believes his colossal media machine is going to deliver a fair, balanced and impartial view of the news quite frankly has their heads in the sand.

There are hundreds of thousands of people up and down the country that believe the Government is corrupt and you only have to look beyond the mainstream narrative for proof and evidence of that. The likes of James Goddard and Tommy Robinson only say what most of us are already thinking.

Many people across the country share exactly the same views and opinions on this subject.

At this present time in the UK, we have MP’s and politicians openly standing against the democratic will of their own constituents, they are blatantly opposing the decision their electorate took and trying to thwart the largest political mandate that this country has ever delivered. Isn’t that corrupt?

We voted to LEAVE and the Government clearly stated that they would implement the decision that the country made but they are NOT doing that. Isn’t that corrupt?

Many MP’s have voted to subvert what the country voted for and they are trying to delay, thwart or even cancel Brexit all together. Isn’t that corrupt?

Theresa May is on record time and time again stating that we will be leaving the European Union on March 29th but now MP’s have voted to delay our exit, that isn’t what the country voted for. Isn’t that corrupt?

We have a police force in London that is more engaged in Common Purpose than it is in tackling real crime that is destroying young lives and the very fabric that this country was built on. Isn’t that corrupt?

Met Police Chief Cressida Dick is more concerned at tackling “Hate Speech” and “offensive” words than she is about tackling the out-of-control murder rate and knife crime epidemic that has engulfed the capital and is now spreading across the country. Isn’t that corrupt?

We have mainstream media that don’t report the truth anymore but they peddle the agenda of their billionaire globalist owners like the Clinton donating Murdoch’s.

So when people like James Goddard and Tommy Robinson claim that the system is corrupt and that our Government is corrupt I’d have to agree with them and many others do too which is why they have such large numbers of followers.

Our Government is CORRUPT, our media is CORRUPT and the police are CORRUPT, the establishment is working together in collaboration to turn this country upside down to deliver the message of the global elite.

The media peddled the narrative set out by the government and the police are there to enforce it and when anyone stands up against their narrative they are branded racist, fascist and far-right.

They are given these labels and paraded like pariah’s in-front of the mainstream media to prevent their messages from gaining traction because they are seen to be a threat on their strangle hold of power.

The establishment tries to silence them by removing their funding streams, closing down their social media platforms to restrict their audiences and even resorting to putting them in prison.

Is this the UK or the former Soviet Union or communist China?

The Government is riddled with George Soros operatives who apply the agenda he pushes via his Open Society and various bogus lobbyist groups, the mainstream media has been bought and is influenced by billionaire globalists whom seek to sow the same narratives and now the police have been infiltrated by Common Purpose hacks up and down the country like Cressida Dick.

They have absolutely no regard for the natural laws of the land but instead impose legislation to control the masses.

We have to fight against this and every single one of us have a duty to our future generations to stand up and be counted and oppose this tyrannical regime.