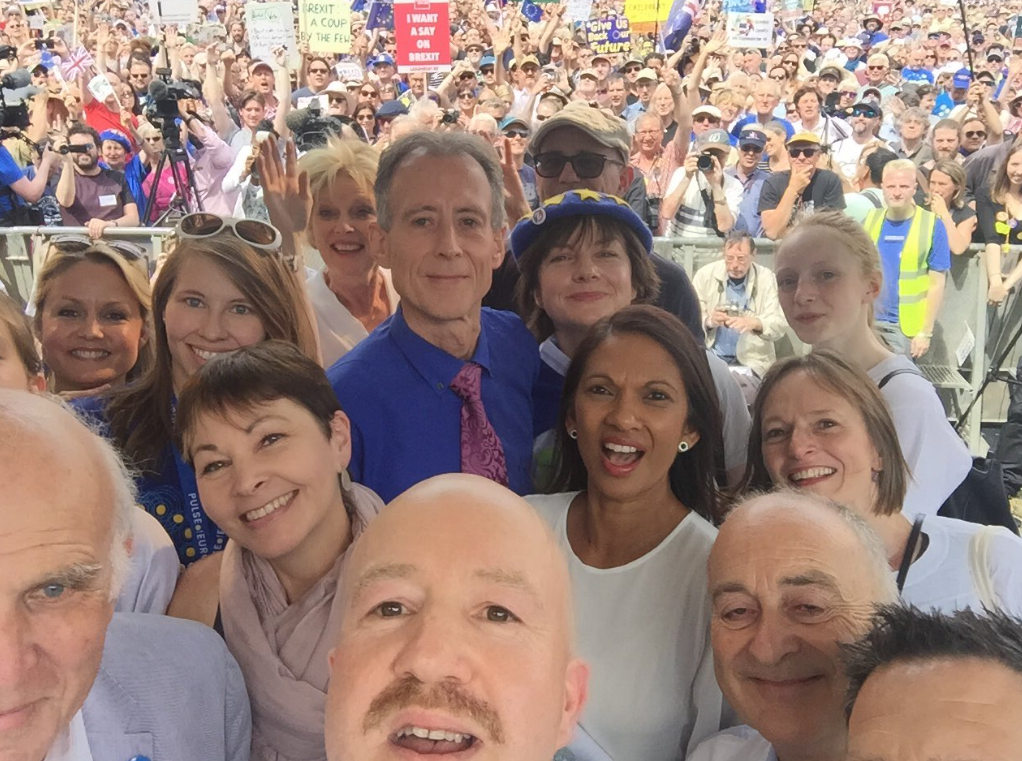 AFTER the big London rallies for and against Brexit, on the second anniversary of the EU referendum, I met a pleasant older lady holding a home-made placard declaring ‘Love Europe, Leave the EU’. As the remnants of the Remain crowd were walking up Whitehall, Liz was determined to correct their assumption that all Leavers are racist.

I suggested to Liz that she was wasting her breath, as nothing can change their contempt for the plebs that dared to defy the neoliberal world order. A group of five Remainers, inebriated by a day of Brexit-bashing, peered with curiosity at Liz’s slogan. Imperiously, they invited us for a meal. Poor Liz was blissfully ignorant to the sarcasm, politely declining as she was waiting for her husband.

‘We’re going to a fish restaurant, do come along.’ When I suggested that the fish would be cheaper if the French hadn’t plundered our coastal waters, a woman took out some coins and threw them at Liz’s feet. ‘There, get yourself something to eat’.

While the Leave crowd went straight to the pubs, Pizza Express was packed with EU fanatics.

Paul shared a tweet from Jonoya, a young black woman, who had been called a ‘house negro’ by a female Remainer. So full of sanctimony, and so full of hate. Our rally was not well-publicised (partly due to Google suppression), but about seven thousand marched from Victoria to Millbank, hearing the likes of Richard Inman of Veterans against Terrorism, Anne Marie Waters, Gerard Batten, Janice Atkinson and 16-year-old Kipper, Reece Coombes.

The prominence of UKIP at such events is spurred by people waking up to the reality that the Tories cannot be trusted to deliver a proper Brexit.

Many of the 42.4% who voted for Theresa May in the 2017 General Election were persuaded by ‘Brexit means Brexit’, only to find that it means just about anything. Instead of a process with a clear outcome, the government has decided on perpetual process. We may never get there.

The only major party that genuinely pledges to honour the referendum verdict, UKIP has gained new supporters from the youthful libertarian movement: Paul, Sargon of Akkad, Count Dankula and Milo.

These characters will change UKIP, perhaps more in presentation than principles: their impressive influence will alert the younger generation to the harm being caused to their prospects by the selfish middle-class elite. Indeed, the charge sheet against the ruling class is long: the hampering of free speech, democracy and equality before the law; the open immigration that brings cheap labour but devastates traditional working-class communities and makes Britons feel like foreigners in their own land; the institutional cover-up of the child rape rampage by Muslim gangs (while the leading activist exposing these wrongs was jailed with glee).

For how long can the young be brainwashed by the propaganda of the EU, multiculturalism and shaming of our rich heritage World Cup, an opportunity to vent stifled patriotism, is a battleground for class conflict. The masses (black and white) are cheering for their country, while the sophisticated middle class finds this outpouring of jingoism quite distasteful.

St George’s crosses are offensive, apparently. The attitude was perfectly illustrated by a caller to the Jeremy Vine show on Radio 2, who wants England to lose because she hates the boorish ‘gammon’ types who support their national team.

As Leavers crossed paths with Remainers after the rallies, a seething rage was expressed in the cries of ‘Traitors’. I hope that people in power begin to see the writing on the wall. The political establishment, not just in Britain but throughout Europe, is now seriously threatened by ‘populism’.

Electoral change won’t happen overnight, because the mainstream parties, civil service and institutions have consolidated their position. Direct action may be needed against the likely betrayal of Brexit: protests, boycotts, possibly a national strike.

Walking home along the Thames, I heard bagpipes. Two dozen Leavers were chatting outside the Morpeth Arms, while the piper was playing his way through the pub. As he went back outside, a woman came from behind the bar to slam the door shut, with unnecessary aggression.

Responding to this rudeness, someone opened the door again and the piper returned. The woman stomped up, pushing her hand into his face and screaming ‘Get out!’ A female Leaver intervened, and suddenly the pub filled with drinkers for a boisterous rendition of ‘Oh, Tommy Tommy!’.

Verily, this is a powder-keg

WILL OF THE PEOPLE IGNORED: Mainstream Media Blackout as Tens of Thousands attend Pro-Brexit rally in London