COMMENT: If The Tories Can Topple Their Greatest PM, Why Can't They Get Rid Of Their Worst?
Advertisement 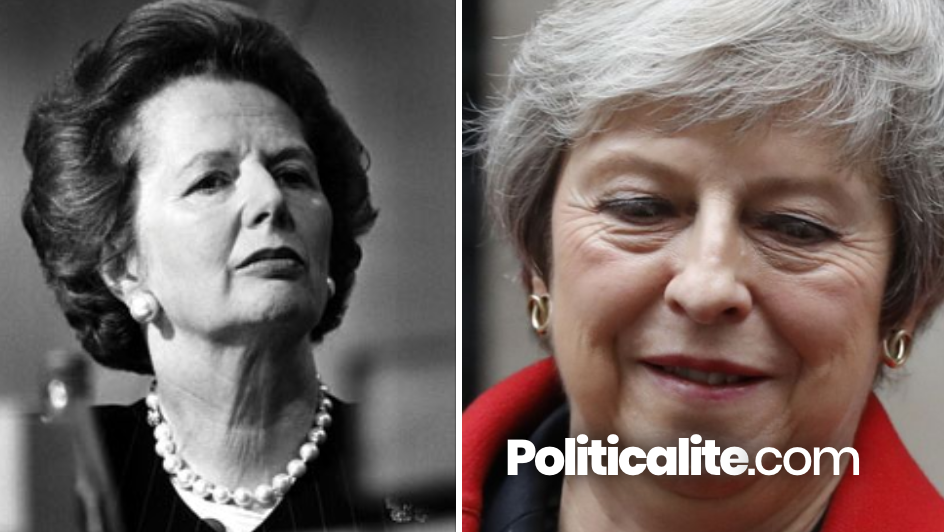 MARGARET Thatcher was arguably the greatest PM since Churchill but in November 1990, after a divisive run of 11 years, the “men in grey suits,” — better known as the 1922 Committee and Pro-EU Tory MPs, toppled their best election winner… over Europe.

Fast forward 28 years to November 2018, and we need to ask, do the Tories have the balls to get rid of their weakest link, Theresa May?

She can’t win an Election, she has no authority over her own party and quite frankly, this weak and unstable stubborn woman, who thinks her refusal to drop her doomed appeasing deal is being ‘Resilient’… well Tezza, it’s really not. You’re no Iron Lady, you don’t even come close to being a copper one.

This week, our weak PM revealed her true Brexit hand – a deal that will tie Britain to the EU indefinitely and break up the United Kingdom making Britain a vassal state.

Compare to Maggie, the late great Iron Lady famously ‘got her money back’ from the EU.

In 1980, she called for the UK’s contributions to the then EEC (Now the EU) to be lowered, if not, Maggie warned that she would withhold VAT payments.

“I want my money back!” she screamed, whilst the French President read a paper in the meeting and his driver revved his engines… undeterred, Mrs Thatcher pressed on, banging on the table making her demands.

In the end, Maggie won. She had fight, resilience and refused to back down to the EU.

Theresa has fight alright, stubborn resilience, but she uses that on her own colleagues and Brexiteers who want the very best for Britain.

They have a vision, they believe in this great country… Theresa May doesn’t. She’s clearly given up by declaring that this is the best deal Britain can get. Well, RESIGN and let someone who believes in Brexit and knows they CAN get a better deal.

Remainer May voted for Remain, she backed Remain – her deal is a weak soft Brexit deal – and it cannot be accepted.

In 1990, the former secretary of state for the environment challenged Maggie, she said No! No! No! to the planned European Union that would take away Britain’s sovereignty.

Maggie, just like May vowed to “fight on and fight to win” when first challenged in 1990.

She won the first round of the Tory Leadership battle – but not with the required majority, she later resigned, shocking the world that Britain’s Tories had deposed their greatest leader since the War.

The Tories stabbed Mrs Thatcher in the back, after everything she’d done for them. Now they want to protect a weak, appeasing leader who’s brought them nothing but ridicule, misery and despair.

“Once again Margaret Thatcher has put her country’s and party’s interests before personal considerations,” said the then Tory Chairman, it’s time Mrs May did the same.