CORONAVIRUS has infected between 5,000 and 10,000 Brits the Government announced today – but Boris Johnson STILL won’t lockdown the UK following the procedures of Scotland, Ireland and the USA.

The PM said the coronavirus outbreak was “the worst public health crisis for a generation” and the number of cases could be “much higher” than had been confirmed much higher than the official tally released earlier today.

Sir Patrick Vallance, the Government’s chief scientific adviser, said the actual number of people infected in the UK at the moment could be between 5,000 and 10,000

“We’ve all got to be clear, this is the worst public health crisis for a generation,” said the PM. “It is going to spread further and I must level with you, I must level with the British public: many more families are going to lose loved ones before their time”

DONALD Trump stunned Brussels last night by announcing a travel ban from all EU countries with freedom of movement – excluding the UK from the ban.

The EU said: “The coronavirus is a global crisis, not limited to any continent, and requires cooperation rather than unilateral action,” adding that the decision was made “unilaterally and without consultation”, the statement continued, adding: “The EU is taking strong action to limit the spread of the virus.”

SCOTLAND has announced a partial lockdown with Schools closed and mass gatherings banned.

First Minister Nicola Sturgeon said: “The view that the health secretary and I have come to is that there are wider issues to take account of here.” 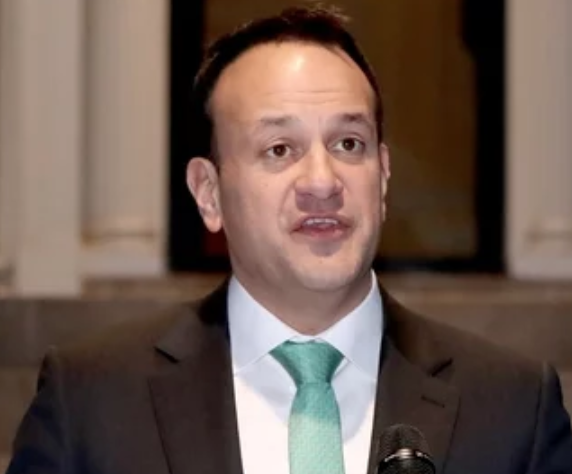 THE REPUBLIC of Ireland is set to go into lockdown tonight as the Coronavirus Crisis spreads across the world.

Schools, colleges and childcare centres in the country will be shutdown for two weeks.

Taoiseach Leo Varadkar also said large indoor and outdoor gatherings should be cancelled, while the country’s Army is ready to respond to requests for emergency help.

Home working is encouraged and socialising should be limited, official advice said.

It adds that break times in workplaces must be staggered to reduce the infection’s spread and meetings should be held remotely.

The Irish Government plans aim to ensure the food supply chain remains uninterrupted and shops are to stay open.

Restaurants, cafes and other businesses can continue trading but should look at ways to implement public health advice recommending social distancing.

Mr Varadkar said: “We have not witnessed a pandemic of this nature in living memory. This is unchartered territory.”

Ireland recorded its first death from Covid-19 this week involving an elderly woman being treated in a Dublin hospital.

By Wednesday night, the country had 43 cases.

A letter from Dr Tony Holohan, Ireland’s chief medical officer, to the Government said the number of cases detected had significantly increased in recent days.
It noted a number of intensive care unit hospital admissions.

The death, clusters of infection including at two hospitals and community transmission were other factors behind the advice.

The move was also in line with communication from the European Centre for Disease Prevention and Control that cases outside known cases of transmission represented a strong signal for social distancing.

It said: “The early, decisive, rapid, coordinated and comprehensive implementation of closures and quarantines is likely to be more effective in slowing the spread of the virus than a delayed implementation.”

Cultural institutions like museums and tourist sites will close in an effort to limit spread of the virus.

All indoor gatherings of more than 100 people and outdoor events involving more than 500 should be cancelled, the Irish Government said.

Arrangements are being made to ensure everyone entering Ireland through ports and airports is fully informed and self-isolates if they develop symptoms.
Mr Varadkar said: “Together we can slow the virus in its tracks and push it back.

“Acting together, as one nation, we can save many lives.”

He currently leads a caretaker Government following last month’s inconclusive election, and political meetings aimed at forming a new administration have been paused due to the emergency.

Mr Varadkar addressed the nation from Washington DC, where he is meeting US President Donald Trump, as he took swift action following updated advice from medics on Wednesday.

Health Minister Simon Harris confirmed the country has entered the delay phase of its response to the virus.

That means the infection is being transmitted between members of the community rather than limited to those who have been to Italy or other blighted regions or their close contacts.

The drastic steps aim to reduce the peak impact of the virus and slow its spread, relieving pressure on the health system.

Mr Varadkar said many more people in Ireland would fall ill with the infection.

And he added: “Unfortunately we must face the tragic reality that some people will die.

“The virus is all over the world, it will continue to spread but it can be slowed.”

He said the Government has a duty to protect those at-risk categories of citizens, such as older people and those with underlying health conditions.

“We said we would take the right actions at the right time and we have to move now to have the greatest impact,” he said.

School closures are among restrictions coming into place at 6pm on Thursday.

People have been urged to continue to go to work but, where possible, do so from home.

Public transport will continue to operate.

Mr Varadkar said: “Above all, we all need to look out for each other.

“Ireland is a great nation. And we are great people.

“We have experienced hardship and struggle before. We have overcome many trials in the past with our determination and our spirit.

What to do if you have symptoms

Stay at home for 7 days if you have either:

This will help to protect others in your community while you are infectious.

Do not go to a GP surgery, pharmacy or hospital.

You do not need to contact NHS 111 to tell them you’re staying at home.

We will not be testing those self-isolating with mild symptoms.

Based on the World Health Organization’s declaration that this is a public health emergency of international concern, the UK Chief Medical Officers have raised the risk to the UK from low to moderate.

The government published its coronavirus action plan on 3 March.

The Health Protection (Coronavirus) Regulations 2020 have been put in place to reduce the risk of further human-to-human transmission in this country by keeping individuals in isolation where public health professionals believe there is a reasonable risk an individual may have the virus.

The UK is one of the first countries outside China to have a prototype specific laboratory test for this new disease. Healthcare professionals who are contacted by a patient with symptoms following travel to an affected area have been advised to submit samples to PHE for testing. Individuals should be treated in isolation.

With the first reported publication of the genome sequence of a 2019 novel coronavirus, PHE was able to rapidly develop further specific tests for this virus, working with WHO and global network of laboratories.

When a clinician suspects novel coronavirus (COVID-19), they take samples from the nose, throat and deeper respiratory samples, package and send them safely to PHE Colindale. PHE can provide a laboratory result from this specific virus on the same working day.

PHE also has the capability to sequence the viral genome and compare this to published sequences from China, if a case occurs. This will provide valuable information on any mutations in the virus over time and allow an improved understanding of how it spreads.

Coronavirus (COVID-19): guidance for health professionals and other organisations