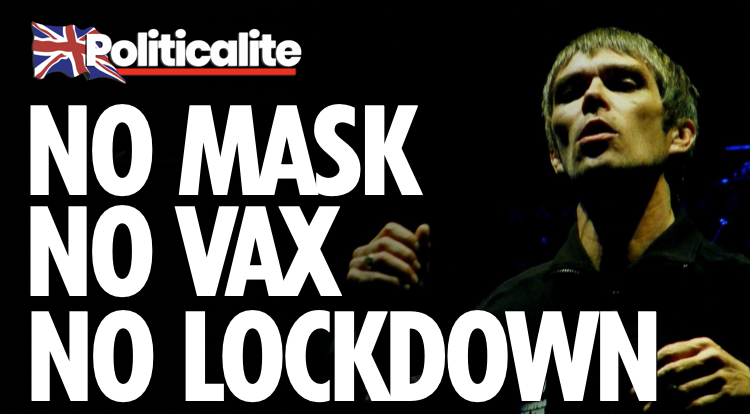 IAN Brown, former lead singer of The Stone Roses, has been ruffling feathers of late. Having faded into middle-aged solo mediocrity, he has suddenly become a Twitter sensation, with his caustic commentary on the Covid-19 regime. Among his greatest hits was the defiant ‘NO LOCKDOWN NOT TESTS NO TRACKS NO MASKS NO VAX’, for which he has been ridiculed by mainstream media. A hatchet job in the Sunday Times yesterday did not bother with any serious consideration of Brown’s invective, simply denouncing him as a superspreader of conspiracy theory.

Excepting a few outspoken figures, such as Van Morrison and Noel Gallagher, the pop and rock scene has been strangely silent on the complete closure of live performance. The same can be said of the theatre. Where is the edgy rebelliousness that we came to expect of rock, rap or any youthful genre? Perhaps the majority of artists fear that a faux pas on coronavirus would make the current interruption of their career terminal, if dropped by their record company. In the woke world of virtue-signalling and puritanical censorship, most high-profile people are keeping their heads down.

Brown’s first foray into Covid scepticism was on 14th July, after facemasks w ere mandated on public transport. ‘PUT YOUR MUZZLE ON GET BACK IN YOUR BASKET’, he tweeted. And several pet dogs of the establishment barked back: ‘Log off’, ‘Knob end’, and ‘You might hold a melody better on a ventilator’, for example. He was not ‘ratioed’, however (meaning when a tweet gets more replies than likes, indicating that it has gone down badly). Although most of the replies were critical, a fair few supported him.

On 31st August he pushed the boat out a bit further, tweeting ‘GET BEHIND YOUR DOORS FOR THE NEW WORLD ORDER’. Now he was being compared to Morrissey, another opinionated Mancunian singer who offended much of his following by telling too many truths. Uppity Irish TV show duo Jedward urged him to mask up and desist from peddling conspiracy theory. However, some fans saw such thinking as a long-running theme of Brown’s lyrics.

His afore-mentioned anti-vaccine tweet, on 5th September, had amassed 20.8 thousand likes at time of writing, with 10.3k retweets. Among the 6.1k replies, someone wrote ‘I wanna be ignored’, a pun on a top Stone Roses track. But the mood was shifting, with at least as many positive as negative remarks. This is a general trend on Twitter, as people wise up to the notion that the constraints on basic liberties are not just to control a virus.

Responding to those questing his expertise on epidemiology and virology, Brown tweeted ‘To all those asking about my medical qualifications, I have the same as the computer seller bill gates’. Many took this too literally, rejecting any intellectual equivalence between Brown and the founder of a cyber empire who has donate billions to lifesaving medical research. Others understood the intended message that money talks, and often with dubious motives.

‘So Im a Conspiracy Theorist HA! A term invented by the lame stream media to discredit those who can smell and se through the government/media lies and propaganda’, he tweeted on 14th September. Actually, as one reply stated, it was devised by the CIA, for the same purpose. Towards the many people insisting masks are necessary to stop a pandemic, Brown tweeted ‘I agree. But what pandemic?’ Inevitably he was reminded ‘Er, the plandemic that’s killed 50,000 in the UK alone’. For Brown, the virus is a hoax: ‘THE GREAT RESET the plandemic planned designed and executed to make us digital slaves’.

Last week Brown went on the attack against his profession: ‘All my fellow singers players and music-makers. Live music is done at every level. Silence is compliance. Let me hear you SAY SOMETHING.’ He then asked why they are all doing what they’re told by Tories. Have they been brainwashed? After taking a lot of flak for several months, Brown seems to be winning the argument.

Indeed, the man who is getting ratioed is the rulemaker Matt Hancock, who now tells us that we cannot get back to normal until we are vaccinated, no doubt contributing massively to the profits of an industry in which he has substantial shares. That’s a conspiracy worth theorising on.

COVID-19 IS VERY REAL AND WE URGE THE PUBLIC TO STAY ALERT, STAY SAFE AND FOLLOW LOCALISED HEALTH ADVICE.