An “untouchable” crime boss has been jailed for 22 years for running a multimillion-pound drug smuggling ring.

Matthew Harrod led a network of smugglers and couriers who used encrypted mobile phones to deal drugs including cannabis, heroin, cocaine and amphetamines.

He along with nine other members of the gang were all jailed at Woolwich Crown Court on December 10.

This was the end of a Metropolitan Police operation that began when the gang was placed under surveillance in June 2018 and ended with 21 people behind bars.

Harrod, 47, of Kingsway, Hove, East Sussex, had been released from prison in 2017 after serving part of a previous 10-year sentence for drug dealing and been placed under a serious crime prevention order.

The measure, designed to stop him from returning to a life of crime, placed him under restrictions including banning him from having more than one mobile phone.

But by the summer of the following year, Harrod was found to be back running a drug dealing network, and at the time of his arrest in January last year had three mobile phones, two of which were EncroChat encrypted devices designed to keep communications secret.

The police operation to take down the smuggling ring saw the seizure of 31kg of cocaine, 308kg of amphetamine, 590kg of cannabis resin and 1.7kg of heroin.

Investigators also seized £900,000 in cash and weapons including a Taser, knives and air guns.

Detective Sergeant Rob Wiggins said: “He was clearly the organiser and the leader of this criminal network. Harrod ultimately thought he was untouchable – and he wasn’t.”

Several members of the gang refused to give police the Pin or passwords to access their regular and encrypted mobile phones.

But investigators did manage to access one encrypted device belonging to senior gang member Lee Taylor when he was arrested that gave access to crucial information.

It gave a snapshot of a typical day for the network, with details of 30 drugs deliveries and dealing with £750,000 in cash.

Police said the network was at the top of a tree which would have sold drugs to urban street gangs.

Detective Superintendent Neil Ballard, from the Met’s Specialist Crime Command, said: “In his role as head of this organised crime network, Harrod tasked his associates to carry out his illicit activities and thought he was untouchable by police, concealing his criminal behaviour on an EncroChat device.

“Little did he know that we were putting significant resources into curtailing his activities and bringing him to justice.”

Harrod, the only member of the gang to deny the charges against him, was sentenced to 22 years after being found guilty of conspiracy to supply cocaine, amphetamine and cannabis after a trial.

He had previously admitted breaching his serious crime prevention order.

The remaining gang members who were also sentenced on December 10 included Harrod’s second in command Paul Clarke 45, of Horns Lodge Lane, Tonbridge, Kent, who was jailed for 15 years for conspiracy to supply cocaine, amphetamine, cannabis and possession of criminal property.

The body of a woman has been found in a suitcase at a hostel in west London, police said. The Metropolitan Police were called... 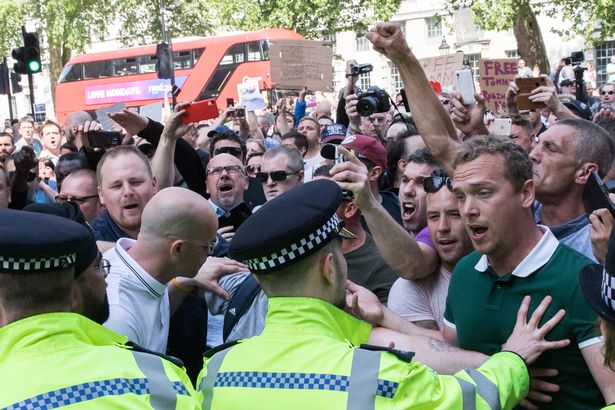 THE BRITISH Establishment is bracing for ‘riots’ if Tommy Robinson isn’t released on Wednesday. Police are bracing for the possibility of mass protests and...