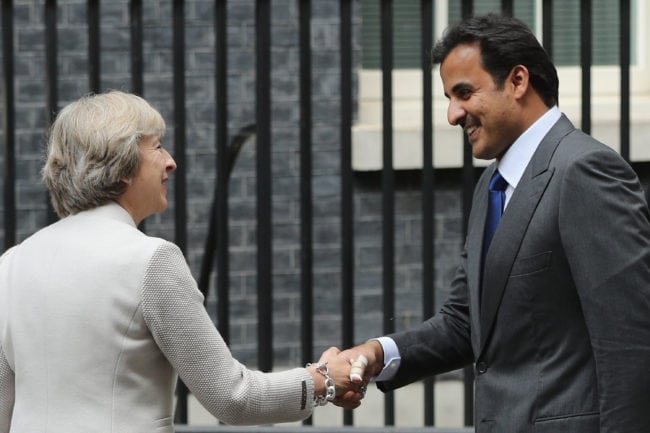 LEFTISTS across Britain are unusually silent today as the Emir of Qatar visits Britain.

Last week, the Left gathered to protest en-masse over the presence of the democratically elected President of the United States and following their massive tantrum which included a hateful Trump blimp – the real crybabies are clearly being soothed by the presence of a massive uncut Muslim d*ck in the country. 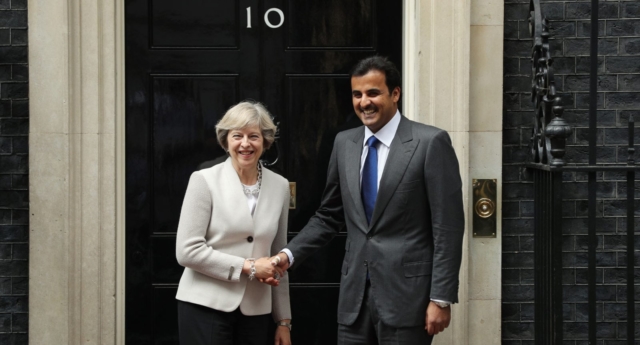 Qatar is a country that has a dismal human rights record, has 26,000+ documented human rights violations, – harbours and financed terrorists, discriminates against women entrenched in law and has laws that still make homosexuality illegal.

According to Amnesty International, Qatari authorities uphold restrictions on the rights to freedom of expression and association and peaceful assembly do not conform with international law and standards.

The authorities do not permit the existence of independent political parties, and workers’ associations were only permitted for Qatari citizens if they met strict criteria. Laws criminalizing expression deemed offensive to the Emir were maintained.

In January 2018, the Qatari regime imposed a travel ban on human rights lawyer Najeeb al-Nuaimi, who was initially informed by text message. The ban remained in place at the end of the year, limiting the lawyer’s right to free movement.

On 25 May, although he was at risk of torture, the government forcibly returned Saudi Arabian human rights activist Mohammad al-Otaibi to Saudi Arabia, where he faced trial. Mohammad al-Otaibi had arrived in Qatar in February 2017. On 24 May he was travelling with his wife to Norway, where he had been granted asylum, when Qatari officials detained him at Doha airport.

Filipino national Ronaldo Lopez Ulep, whose conviction on espionage charges was upheld in 2016, continued to be detained despite an unfair trial and allegations of torture.

Women continued to face discrimination in law and practice. Personal status laws continued to discriminate against women in relation to marriage, divorce, inheritance, child custody, nationality and freedom of movement.

In June, the UN Committee on the Rights of the Child (CRC) urged the authorities to investigate crimes related to gender-based violence and to bring perpetrators to justice.

The Committee called on the authorities to amend the Nationality Act in order to allow women to confer nationality to their children on an equal basis with Qatari men.

Despite the approval of a draft law providing permanent residency rights for the children of Qatari women married to non-Qataris, discrimination persisted with women unable to pass on nationality and citizenship to their children.

In June, the CRC expressed concern over gender discrimination of children, violence against children in schools and at home, and laws limiting the right to nationality of children born in Qatar.

The Committee called for the enactment of measures to end these practices. It also called for ending child marriage and raising the age of criminal responsibility, which remained at seven years of age in contravention of international standards.

The Committee reiterated concerns about discrimination against the children of migrant workers and recommended the abolition of the kafala sponsorship system “without delay”.

The Media has also remained silent, as pointed out by Kipper Central’s Reece Coombes – but the outlet to call out the visit has been gay news site Pink News, who have called on the PM to be an advocate for LGBT people in Qatar during the Emir’s visit.

Qatar’s human rights violations should worry the left, who are supposed to be on the side of the oppressed, but hang on – if they spoke out about Qatar’s blatant disregard for humanity, they would be attacking a Muslim country – and we can’t attack a protected species, can we?