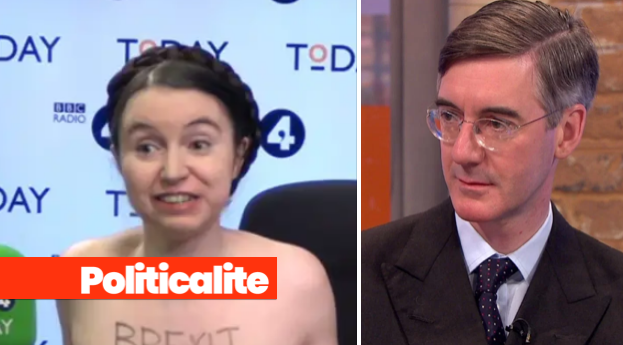 A NAKED anti-Brexit protester has challenged hardline Brexiteer Jacob Rees-Mogg to a NAKED debate, live on the Beeb.

Appearing on BBC Radio 4’s Today Show, Dr Victoria Bateman – a loony remainer stripped off during the BBC appearance and challenged Rees-Mogg to a naked debate. 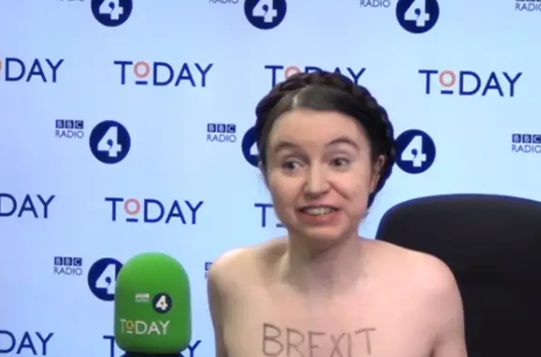 The ‘economics fellow’ at Cambridge University, invited the Tory MP to discuss Britain’s exit from the EU without any clothes on in bizarre scenes.

She sat down for the interview, wearing a coat, before nearly giving soon a to be retired Mr John Humphrys a heart-attack by stripping off.

She had “Brexit leaves Britain naked” written across her body as she was interviewed.

Bateman said: “I invite Jacob Rees-Mogg to do a naked debate with me and we will get to the roots of this issue.

“Britain faces many, many problems right now from housing to the NHS, and the European Union is not the cause of those problems.”

Asked whether she is simply an “exhibitionist”, Dr Bateman said: “I am completely comfortable with my own body, I view women’s bodies as one of the big battlegrounds that we face today.

“And actually by engaging with society about women’s bodies, one of the things it shows is the way in which people are quick to judge women purely based on their bodies.

“For thousands of years men have controlled what women can do with their bodies, and women’s bodies have been seen as something purely existing for sex and for babies.

“So what is wrong with a modern day woman taking control of her body and using it to give voice to what is the most depressing political subject in Britain right now?”

Twitter hit back at the loony protester, with Raheem Kassam tweeting: “When I was grilled on @BBCr4today
, the liberal left had a meltdown because apparently I’m a racist fascist blah blah.

But when a creepy exhibitionist wants to go on naked while campaigning against Britain’s democratic Brexit vote, that’s fine?

When I was grilled on @BBCr4today, the liberal left had a meltdown because apparently I’m a racist fascist blah blah.

But when a creepy exhibitionist wants to go on naked while campaigning against Britain’s democratic Brexit vote, that’s fine?

Alan Fraser tweeted: “Tried this during a job interview today.
They said they would let me know
Fingers crossed.”

Another added: “This woman is just an attention seeker. No one took any notice of her when she was wearing clothes so she’s using it for attention. The only problem is, everyone is just mocking and laughing at her now. They’re still not listening. If anything she’s lost all credibility.”