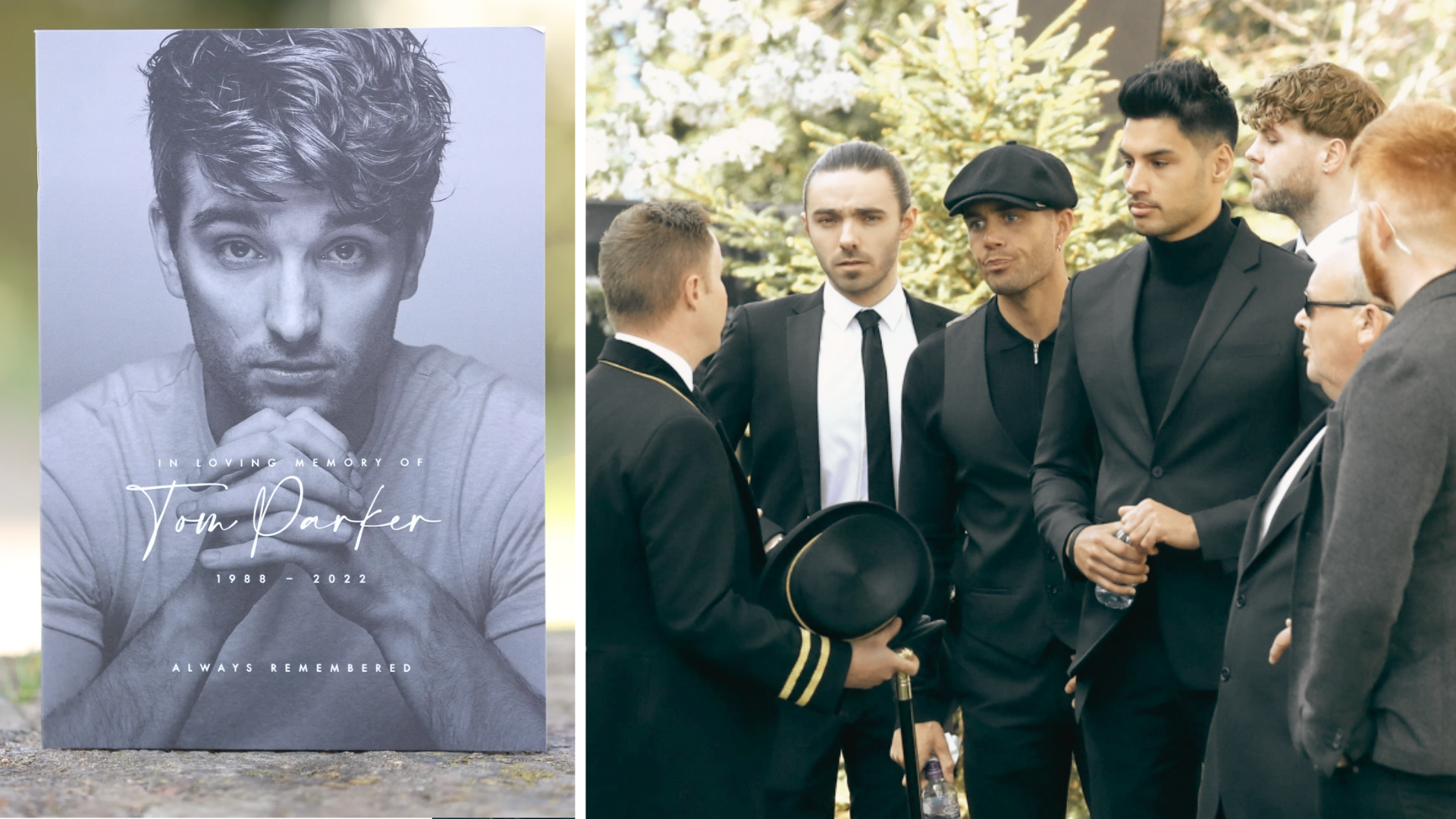 TOM Parker’s widow, Kelsey, has paid tribute to The Wanted star as her “soulmate” during his funeral, saying: “Marrying you was the best day of my life.”

The singer died last month at the age of 33, surrounded by his family and bandmates, 17 months after being diagnosed with an inoperable brain tumour.

Family and close friends, including Liam Payne from One Direction, attended the private ceremony at St Francis of Assisi church in Petts Wood, south-east London on Wednesday morning.

Parker’s bandmates Jay McGuiness, Max George, Siva Kaneswaran and Nathan Sykes served as pallbearers, carrying his coffin into the church as Champagne Supernova by Oasis played to fans gathered outside around three big screens that live-streamed the service.

Dressed in black, many fans clutched tissues and cried as the cortege arrived from the funeral parlour.

Outside the church, flowers spelled out the words “Glad You Came”, the title of The Wanted’s 2011 hit that went to number one in multiple countries.

During the private service, a pre-recorded message from Kelsey was played in which she shared anecdotes including about how the pair first met at a nightclub before Parker shot to fame.

“From that moment I told everyone I wanted to marry Tom Parker,” she said before becoming tearful.

The congregation erupted into laughter when she added: “Tom told me he was going to be famous and wouldn’t have time for a girlfriend, but he wouldn’t leave me alone.”

She added: “I will treasure every memory because life with you was never dull. You were always coming up with songs, new game shows and we all know how much you loved an invention – I bet you were gutted you never made it on Dragons’ Den.

“Marrying you was the best day of my life… soulmates that’s what we are.”

Addressing the congregation, George said of carrying his friend’s coffin: “I could actually hear him saying, ‘It’s about time’, as he carried us for the last 12 years.”

He also joked that Parker had been the only member of The Wanted to have had a “punch-up” with all his bandmates, prompting laughter from those gathered.

George added: “Everything he did he did with best intentions, even if it was a fight, he got away with it because it was Tom.

“I could say so much about Tom. One thing I will always remember is his laugh. He loves laughing at people and we experienced that every day.

“He has left us far too early and we will miss him so much. The people outside, the people all around the world, is a credit to him you. Rest easy mate.”

Kaneswaran, meanwhile, hailed Parker’s “big Boltonian heart” before adding: “He was never afraid to stand up for what was right, no matter the risk.”

The service began with a violinist-accompanied version of You Raise Me Up sung by Ollie Marland.

Handbags And Gladrags, also accompanied by a violinist, was sung by RuthAnne Cunningham, who also delivered a rendition of Amazing Grace.

Parker’s coffin was carried out of the church to The Wanted’s hit song Gold Forever before Kelsey, dressed in a gold jacket, placed a single white rose inside the hearse.

As the singer’s body was taken to a crematorium, friends, family and fans lined the street clapping and cheering, and bandmates George and McGuiness were seen wiping away tears.

Family and close friends of the star had gathered in the Sovereign Of The Seas pub opposite the funeral parlour.

The horse-drawn cortege featured a photograph of Parker in a white rose-adorned frame, alongside photographs of handprints from his children, Bodhi and Aurelia.

Other famous names to attend the service included former The Only Way Is Essex stars James “Arg” Argent and Lydia Bright, who were previously a couple.
Tom and Kelsey married in 2018 with Aurelia born in 2019 and Bodhi in October last year.