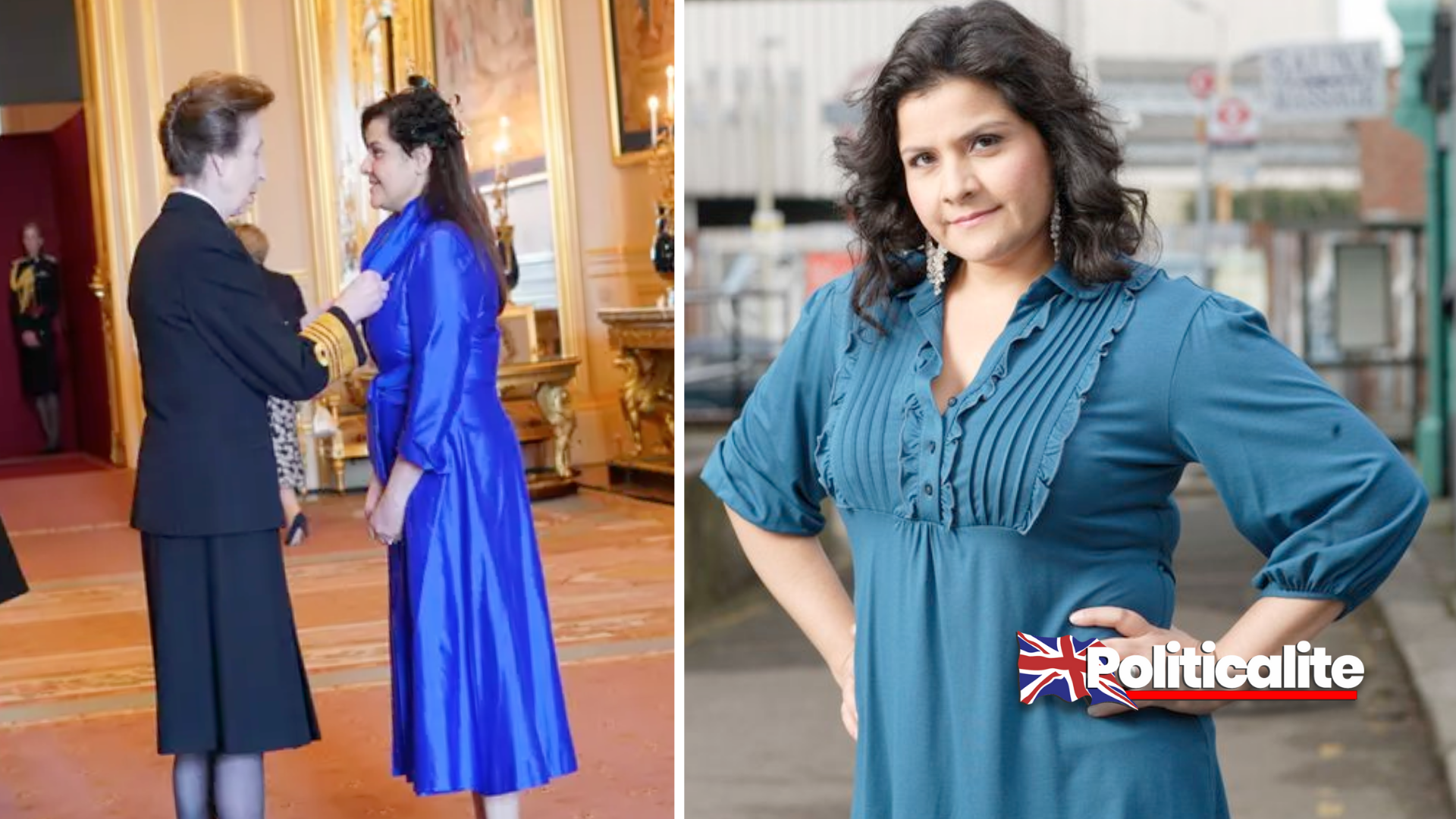 EASTENDERS star and matriarch Nina Wadia has reflected on her humble beginnings in India at her OBE investiture ceremony, revealing that she “never in a million years” thought she would be recognised by royalty.

The 53-year-old actress, who found fame on acclaimed sketch show Goodness Gracious Me, was recognised at Windsor Castle by the Princess Royal for services to entertainment and charity.

Wadia shed a tear for her late parents, who she credited with inspiring her charity work, and described braving a quarry in winter while wearing a dress for new Netflix show The Sandman, which is based on a DC comic of the same name.

The comedian, who grew up in Mumbai, India, before moving to Hong Kong aged nine, wore a striking blue dress from Bombshell HQ, silver Vivienne Westwood bracelet and a delicate black fascinator for the ceremony which she attended with her husband, composer Raiomond Mirza.

Wadia told Politicalite her OBE was tinged with sadness at her parents not being around to see her collect it.

“There’s something about growing up in this little house in India, I never in a million years thought that this could happen to someone like me,” she said.

“If they were here, I would have had a fight over who to bring – mum or dad.

“I wish they were here, because this would mean so much more. I miss them terribly.”

Pausing to wipe a tear, she added: “My mum would have been so proud and so excited.

“This was right on the surface, I tried to hold it all in, in the car I was saying – my makeup’s going to run.”

Wadia, who has a son with Type 1 diabetes, spoke with Anne about being an ambassador for the Juvenile Diabetes Research Foundation (JDRF), and supporting other charities including Diabetes UK and Barnardo’s.

She told Politicalite: “My parents taught me from the very beginning that if success starts to come to you, make sure you give something back.

Wadia said she is starring as the “ethereal” Mother Fate in the Netflix interpretation of Neil Gaiman’s graphic novel, The Sandman.

She said: “I have this huge wig, and we filmed in what I think was a quarry somewhere in south-west England on what was the coldest day in February last year.

“I was wearing a long chiffon blue dress and a wind machine on me.

“It was quite something. It looks incredible from the bits we’ve seen, a stunning piece of work, so I’m very excited about that.”

Wadia added that in her performances for more relatable characters than Mother Fate, she adopts mannerisms from interesting people she meets in real life.

“What tends to happen with my work, is I will meet people who have quirks, and I think, ‘I’m going to steal that for a character’ – and hope they don’t notice,” she said.

“I’ve always been a people-watcher, I think a lot of actors are, because we get inspiration from that.

“I like detail in my work. So when I’m watching other people I notice how they hold a pen, or how they drink their tea, and I try and incorporate that.”

Netflix’s version of The Sandman, which also stars Stephen Fry and Jenna Coleman, has been described as “a rich blend of modern myth and dark fantasy in which contemporary fiction, historical drama and legend are seamlessly interwoven”.