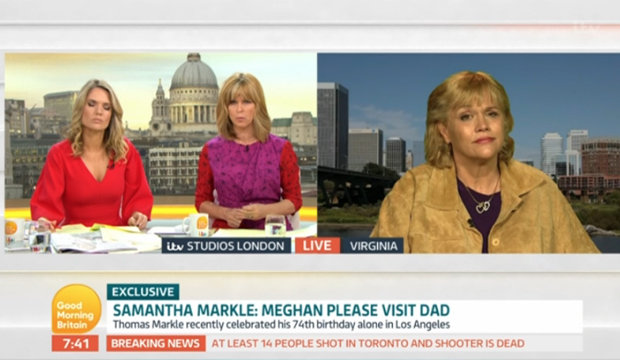 MEGHAN Markle’s sister, Samantha Markle has refused to deny rumours that she is set to appear on Celebrity Big Brother when the hit reality show returns next month.

Appearing on ITV’s Good Morning Britain, Samantha, 53 was asked about claims that she would be moving into the most famous house in Britain.

When she was questioned about ‘Cashing in’ on the Royals, she said: “Whether you are a celebrity or a royal, you have a high public profile and so that’s subject to discussion within the media”

Markle added: “To add to the issue of ‘cashing in’ the media makes billions of dollars [from] social issues and talking about the royals so I don’t see how we are any different.”

“No one has a copyright on our life experiences, I think the public forgets that each individual has their own life experiences, and with all due respect it’s not just Meg and we are entitled to share that and if we can shed some light on issues, the great.”

She went on: “And for someone to say ‘oh you shouldn’t take any money, you should turn down a paycheck well go tell your boss you don’t want a paycheck for interviewing me, cos some might say that’s cashing in”

Charlotte Hawkins asked: “So does that mean we might be seeing you on Celebrity Big Brother then?”

Samantha replied: “Errrrrrrrrmmmmmmm, well, I would tell you but I would have to kill you, I can’t say.”

Kate Garraway added: “That sounds like a yes to me” and Markle responded: “I don’t wanna find myself in locks and stocks.”