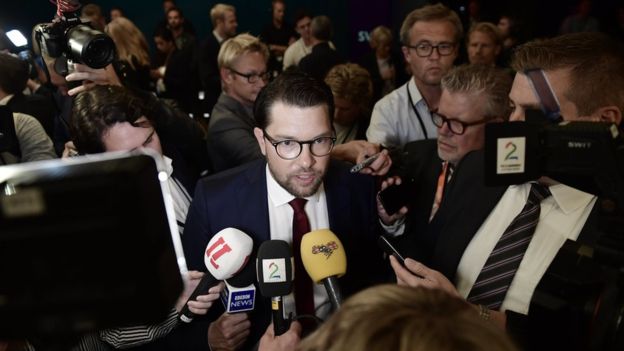 The Swedish Democrats, a populist anti-EU, anti-immigration Party are set for sweeping gains as Sweden goes to the polls today. Most polls place them on around 20% of the vote which, if realised, would see them become potentially the second largest Party in the Swedish Parliament although they will almost certainly not enter government as all the other parties are united in their refusal to work with them. Despite a significant collapse in the polls, Sweden’s Social Democrats may well end the day in a position to lead another minority government.

Immigration has been the hot-button issue of the campaign. Unsurprisingly, Jimmie Akesson, leader of the Swedish Democrats focused on it during the last tv debate of the campaign, a debate where all the other opposition parties united to try and marginalise the Swedish Democrats, painting them as ‘far-right’ and ‘fascist’ (now where have we heard those terms before?). Akesson said: “During the last 10 years we’ve one million more people here, due to irresponsible immigration policies. Full healthcare on arrival arrive is not reasonable, there should only be acute treatment.”

Social Democratic Prime Minister Stefan Lofven has tried to play the ‘extremism’ card in a desperate last-ditch ploy to shore up crumbling support. Voters look set to ignore him however and send another shockwave through the establishment and through Europe….

HUMILIATION: French Navy ‘Ready To Intervene’ In Scallop Wars
NO YOU KHANT: Londoners Turn On Little Sadiq
To Top