Whilst filming her new documentary, ‘Borderless’ Lauren and her crew spoke with many residents who revealed they had been attacked specifically due to their lack of faith.

Two refugees, in particular, showed scars from previous times they had been attacked by supporters of ‘Islamic State (ISIS)’.

One explained he was specifically targeted for being an atheist and the same had happened to Christians, Jews and Kurds recently. 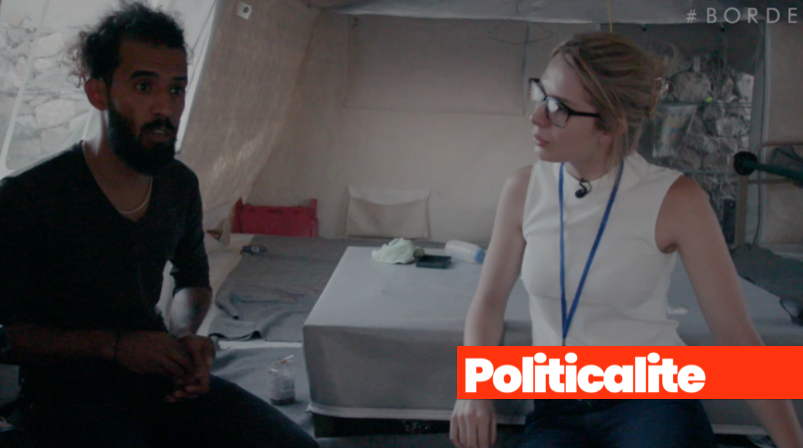 This report comes just two months after Lauren and her team’s last investigation into NGOs caught Ariel Ricker, CEO of a legal aid organisation admitting to teaching migrants to lie & pretend to be Christian to gain asylum in Europe.

When the report was made public, Ariel went into hiding from the police and deactivated the NGO’s social media accounts.
There are reported to be between 8,000 and 11,000 residents in Moria, with numbers continuing to rise as more arrive weekly on the greek island shores.

“I was recently attacked, they stabbed me five times in different parts of my body. They tried to kill me. This is the signs of torture. There is another wound on my head.”

Lauren asked if ISIS is operating in this camp and revealed that they were.

One refugee told Lauren: “Yes, they are here posing as refugees, they fled from Syria and Iraq and came here as refugees.”

“They are armed with [makeshift] knives, letter knives and razors. We have tried several times to call police, but they didn’t respond.”

“I believed the press could help us, they come here and shot photos and videos of everything, but to no avail.”

“My life is in danger. Since the first day I came here. I am an atheist, a minority, whenever they see me outside of my tent or inside it, they intercept and attack me. Not only atheists, but also Christians. They do this to any minority here, such as Yazidi and Kurds. There were about 4 Kurds killed in this camp. There is a video proves that.”