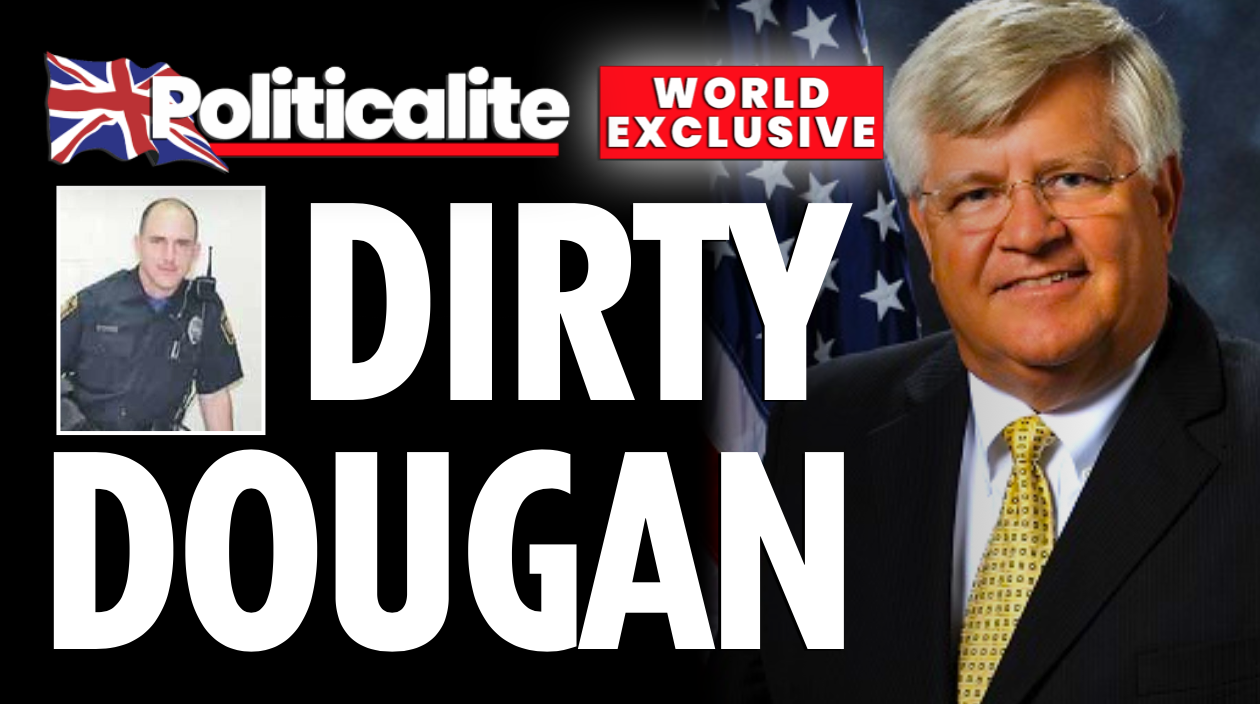 A U.S. Police Chief Deputy has made damning allegations surrounding ‘Russian pawn’ and former Palm Beach copper, John Mark Dougan, who told Politicalite last week that he “has never claimed to have videos of Prince Andrew”, despite MI6 fears.

Palm Beach County Police Deputy Mike Gauger, who serves as the Senior Executive Staff Officer for the Department of Law Enforcement Operations and Corrections accused the Russian runaway of being a “total fraud” with a “long history” alleged lies, defamation, sexual harassment and corruption, Politicalite can exclusively reveal.

Mike Gauger, a Chief Deputy with over 49 years of service in Palm Beach spoke exclusively to Politicalite after Dougan and an Epstein activist named ‘Kirby Sommers’ tried to dupe Politicalite with fake photos and allegations against a NBC executive, accusing him of paedophilia.

Dougan, who now lives in Moscow was alleged to have “multiple behavioural issues” by his former colleague, who accused Deep Fake Doug of spending most of his Palm Beach police patrols “hitting on women” and creating “problems” were ever he went.

Gauger branded Dougan “a lying, cheating, fraud” who was orchestrating “dozens of smear campaigns” against him, to keep up his facade, even going so far as to brand the decorated Police Chief with false accusations of being a “child molester” to cover his tracks.

This claim was backed up when Dougan in an apparent attempt to intimidate a journalist, began a Twitter smear campaign against Politicalite, accusing us trying to ‘get money’ for a trip to Russia, whilst trying to ‘contain the damage’ of the fallout from his fake news Epstein NBC leak.

Deputy Gauger spoke with deep emotion when describing how Mark had branded him a “paedophile” creating a total “living hell” for the Florida Police bigwig in a rotten attempt to destroy his distinguished career and credibility.

Mike told Politicalite: “I don’t like to be the “center of attention” and would much rather have this done anonymously, but someone has to stand up to this bully and have him held accountable for all the lives he has damaged.”

Despite Dougan trying to destroy Mike’s life, and reputation, the decorated Deputy defiantly said that “enough was enough” adding that the whole world had to know about the “fantasist” who is playing the Russian President out of thousands of rubles with his alleged fantasy of having ‘dirt on dominant players on the global stage, including Britain’s Prince Andrew.

Dougan’s former boss alleges that ex Florida -cop is “full of bullshit” and cannot be trusted, listing a long record of failures and misdemeanours”.

Dougan was branded a “serial womanizer” by Gauger who revealed his journey with John “Mark” Dougan began when we received a letter from Carey Haughwout, of the local Public Defender’s Office.

Michael told Politicalite: “She extolled the virtues of Dougan and requested we consider him for employment. He was on a list for hire, but examining his dismal work history he would have been passed over for more qualified candidates.”

“Due to her request, we made an exception and provided him with employment. Ironically, within days of his employment and while in an orientation class, others in the class remarked on his multiple stories of all he had accomplished and started to question his veracity.”

“During his employment, he created complaints where ever he was assigned. The answer of his superiors was to move him to another geographic area. Problems continued and, finally, he was assigned to the Western communities. In this District, he engaged in utilizing a private computer with other deputies where they embellished interactions with the citizenry.:

Dougan launched a smear campaign against Gauger, branding him a paedophile, just like he did with NBC boss Steve Burke.

Gauger added: “Dougan’s harassment of the local minority community created problems with his direct supervision who started to hold him accountable.”

“Subsequently, he received multiple actions against his behaviour from his direct supervisors.” said Chief Gauger.  “Dougan, immediately went on the attack. Deleting his embellished comments on a private computer, he reported the other deputies, sending their comments to the local newspaper.”

“Dougan’s supervisors sent complaints to the Internal Affairs Division, where actions were initiated.”

Dougan was placed on a “work performance” plan, that if improvements were not made his employment would be terminated.”

“In addition, the Sheriff’s Office received a lawsuit for the actions Dougan took towards a black off-duty deputy who was attending a house party with other minority deputies.”

“The complaint was for loud music and Dougan utilized his chemical spray against the deputy playing the music.”

“The subsequent jury trial found Dougan’s actions reprehensible and awarded hundreds of thousands of dollars to the victimized off-duty deputy.”

“Weeks into the “work performance” plan, Dougan advised his supervisor that he had to take FMLA (Family Medical Leave) due to a sick relative.”

“Later, we discovered he flew to Maine and applied to a small municipal police department where he falsified his current status and had a local friend on the Sheriff’s Office provide a reference, without referring to the multiple open Internal Affairs cases and the “work performance” plan he was on.”

The Windham Police Department soon learned that Dougan’s behavior was unacceptable after multiple complaints of his sexual harassment of females on the department and in the community.

“He was terminated from the agency and subsequent lawsuit due to his behaviors cost the agency hundreds of thousands of dollars. Of course, none of this was his fault and as is his pattern, he blamed everyone else.” said Gauger.

On both websites he claimed to be a corruption fighter and blamed all were incompetent or corrupt.

The police chief of Windham started receiving anonymous complaints on a cabin rental business he operated. The young female officer who was sexually harassed by Dougan started receiving anonymous complaints and fake stories placed on the internet. The young female officer, Danielle Cyr Nelson, won her lawsuit from the devastating actions of Dougan.

Dougan then continued attacking the Sheriff of Palm Beach County on his websites and embellished multiple issues to place the agency in a “bad light.”

The Sheriff requested I look into who this Dougan was, (the agency has 4,000 plus employees) and after some background, Dougan discovered my name.

He now included me in his blog rantings, accusing me of being alternative life style, raping my son, posting photo shopped pictures of my face on men having sex, my wife’s face on a woman having sex with another woman and countless other false transgressions.

“He manufactures false news articles, one as late as this year on Martin Luther King Day when he distributed a news release claiming I was running for mayor of a local community where I live.” Gauger told Politicalite.

“In another, he claimed I was burning Korans utilizing pig fat for fuel on the front lawn of my home. He claims this was distributed to Muslim organizations.”

“We were not the only ones he attacked, Renton, Washington’s mayor and police chief, a school district in Massachusetts and a small police department in California all were victims of his false accusations and crude, vile and disgusting photoshopped pictures.”

Dougan “prides himself as a “corruption fighter” said Michael, adding: “He currently has arrest warrants for his arrest here in Florida for multiple felonies.”

In a direct response to Politicalite‘s expose, Dougan took to Twitter on Friday evening to attack the outlet he tried to dupe with fake pics leaked to Bichute.

He also claimed that he had never heard of Burke before a journalist pointed it out to him and said he had never claimed to hold pictures on Prince Andrew.

Dougan, who attempted to lure Politicalite to Russia after his leak was exposed as a fake; claimed we had refused after “asking for money”, despite Dougan offering us his apartment to stay in, to view some 700+ videos he claims to hold to “see if we knew anyone in the videos”.

We called his bluff and suggested he would have to cover costs and expenses, given we are a small citizen based outlet with no major backers, and did no longer see Dougan as a credible source.

Dougan was indeed bluffing on his offer responding to our suggestion that he cover expenses, for as little as two days, said he “would see what he could do” , before going on the attack, accusing us of tyring to do a “shakedown” in multiple enraged emails that we did not respond too.

Politicalite, also did not feel Dougan’s offer was worthwhile, or credible given his criminal offences and alleged FBI charges.

He later posted a transcript of emailed questions in response to his ‘Epstein Leak’ in an attempt to discredit this expose on his career as a police officer.

He said in a statement on Twitter: “I see you keep tagging the Palm Beach Sheriff. No doubt he paid you nicely to do just that. You’re no journalist at all. Just a hack.”