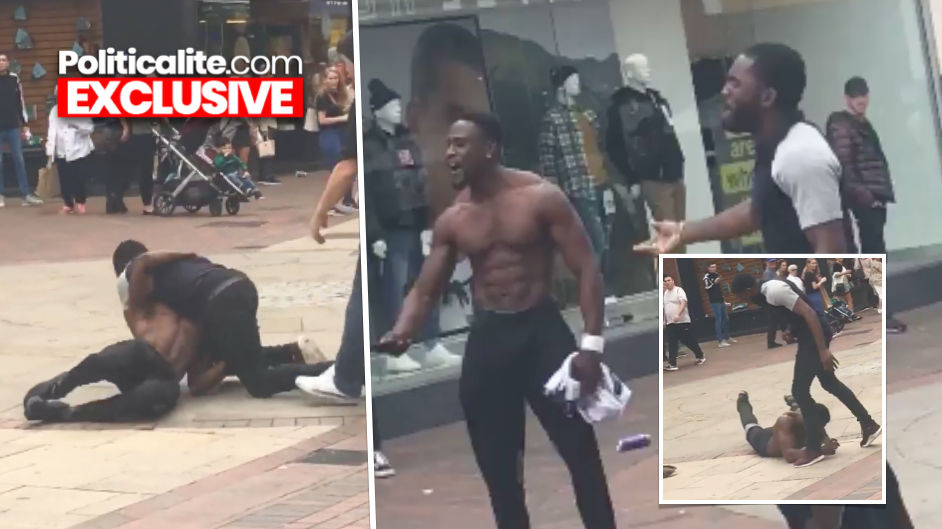 A MAN has been arrested after a Street Brawl in Chatham, Kent today.

In a video posted on Facebook, two black males brawled in front of a Primark store in Chatham town centre.

A man who had been walking away was heard on camera saying: “I swear man, come to the gym, let me bang you up, I’m not going to fight you in public, I will fight you in the gym.”

A topless male then repeatedly shouted “what, what”, before a physical BRAWL broke out.

The footage of the incident was posted on Facebook by a passerby.

Ashleigh Head, an eyewitness who recorded the video exclusively told Politicalite: “I didn’t know what the argument was about and I was filming them arguing as I couldn’t believe that they would do it in such a public place.”

Ashleigh added that she was shocked at the turn of events saying: “I did not anticipate it would escalate into that full-on brawl hence why I ended the video as soon as people rushed over.”

As the two men throw punches at one another, the topless man falls to the floor once more.

The other man then appears to kick him in the head while he’s down, which causes the crowds around to gasp in horror as the “thud” echoes around the town.

The video cut-out as the men were pulled apart, Ashleigh revealed what happened next.

“They were separated and the man that kept his top on apologised to everyone that they had to witness that, then some police officers turned up.”

Kent Police said: “We were called to a disturbance in Chatham High Street at 12.17pm on Wednesday, September 19.

“It was reported that two men had been involved in an altercation, with no injuries reported.

“Officers attended the area and have arrested a 24-year-old man on suspicion of assault.”

“He remains in custody as enquiries continue.”