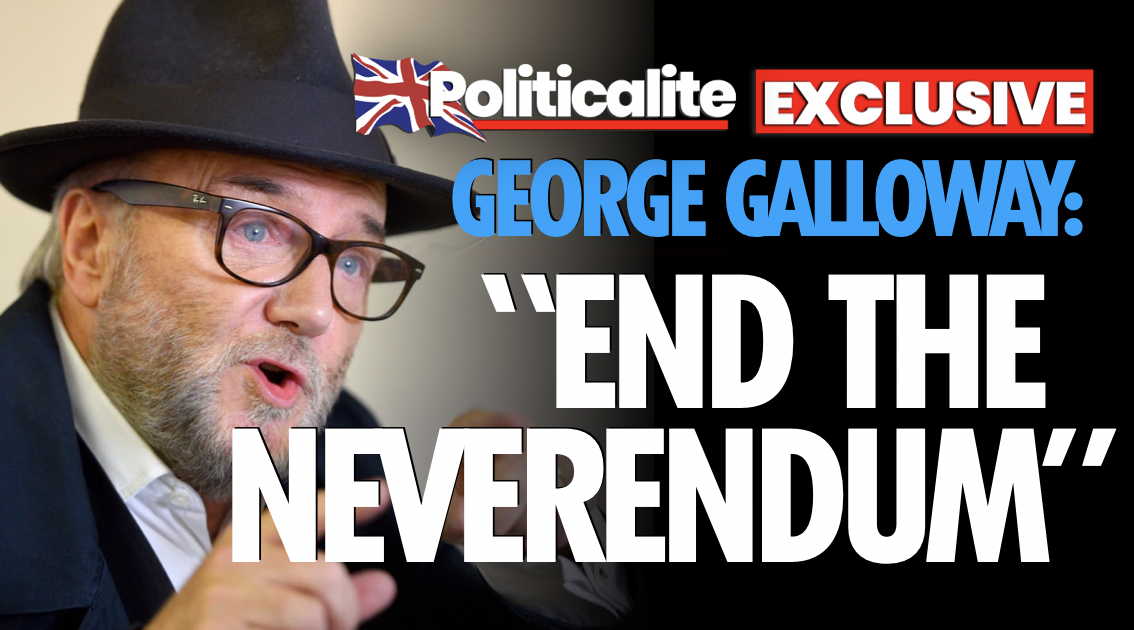 In an exclusive interview with Politicalite, former Labour and Respect MP George Galloway discussed his political comeback, running the newly formed Alliance For Unity campaign group, of which aims to remove the Scottish National Party from power in Scotland’s Parliament.

Galloway discussed his objections to the SNP personally, the controversial Hate Crime and Public Order Bill and his support for British unity.

He admitted that his opposition to the Scottish National Party, of which currently is the largest party in Scotland both in its own Parliament and that of the House of Commons, stretches as far back as when he joined the Labour Party when he was 13 years old.

He said in particular an incident during the 1973 by-election in Dundee East, whereby ‘their main shtick was to highlight the fact that our candidate was English, an engineering worker from Sheffield’. He noted that he ‘felt then and feel now that we had more in common with George Machin than with Gordon Wilson the narrow nationalist and petit-bourgeois solicitor from Paisley’, of which led to the SNP becoming the ‘main political enemy for Galloway, meanwhile the Labour candidate in Machin won that election. This remained until the February 1974 general election when Wilson took the seat by 2,966 votes, and kept it in the October election in the same year, despite Machin trying to gain the seat back. Galloway opposed Wilson’s ‘vicious opportunistic right-wing nationalism’, of which shaped his feelings towards the SNP as a political party.

He also noted that the AFU opposes the controversial Hate Crime and Public Order Bill, of which was proposed by the SNP’s Cabinet Secretary for Justice Humza Yousaf MSP. Galloway noted the objection to the bill by ‘the Police, by the Catholic Church and by a large swathe of political opinion in Scotland’, and stated that ‘it will not pass it cannot stand’. He also felt it was a part of the ‘increasingly autocratic rule of the SNP’, jokingly stating that it would eventually become a hate crime not to clap for the birthday of Scotland’s First Minister Nicola Sturgeon. He also called the SNP hypocritical, noting their supporters had been greeting non-Scots with ‘F*ck-off out of Scotland’ and ‘England Out of Scotland’, noting that ‘if these banners said Asians or Irish or any other ethnicity they’d be under-arrest’.

He announced plans to run as a candidate for the Scottish Parliament in the 2021 elections, being number one on the regional list for the South Scotland division under the AFU banner, due to the Additional Members voting system the Scottish Parliament has in place. The AFU’s main policy platform was to ‘get the SNP out of office so Scotland can get off the hamster wheel we’ve been on for 13 years’, mainly due to what Galloway dubbed the ‘Neverendum’, referring to the attempts by the SNP to get a second Scottish Independence referendum on the table, despite having lost the previous one in 2014 by 10%. He stated that ‘if we achieve this we will have done our duty and written a new history for Britain’, showing the political unity in the AFU, despite the different backgrounds in terms of initial stances they came from. He concluded that ‘We are a cross-class cross-party non-sectarian alliance with but a single goal, and that ‘Normal politics can return to Scotland only once the Nationalist threat is defeated’.

He concluded the interview by discussing his support for British unity, as opposed to unionism, owing it to his Irish Catholic heritage.

He explained that the AFU is ‘anti-separatist’, and that they believed that  ‘partitioning a small English-speaking island of people, historically constituted (300 years) with a common culture and common economic interests would be at best a poor idea and at worst disastrous’, which could turn ‘very ugly indeed’. The Alliance for Unity is set to run in the 2021 Scottish Parliament elections, which are going to take place on the 6th of May of that year.

Galloway has had a long career in British politics, starting by becoming a Labour MP for Glasgow Hillhead/Kelvin in 1987, defeating the SDP MP and former Home Secretary Roy Jenkins in doing so, and held the seat until 2005. During that time, he became most famous for his opposition to the 2003 Iraq War, which saw him expelled from the Labour Party, leading him to join the newly created Respect Party. He then unexpectedly won the London seat of Bethnal Green and Bow in 2005, taking it away from Labour’s Oona King, of who had supported the war, which was unpopular with the constituency’s populace.

After failing to win the London seat in the 2010 election of Poplar and Limehouse, he won the 2012 by-election under the Respect ticket for Bradford West, and remained there until 2015, losing to Labour’s Naz Shah. During that time, he briefly ran the party before it dissolved in 2016. He also ran unsuccessfully as an independent candidate in 2017 and 2019, starting the Workers Party of Britain in 2019, and then the Alliance For Unity in 2020. He currently runs the Mother Of All Talk Shows for Russia Today, and has previously threatened to challenge London’s Labour Mayor Sadiq Khan, a man he has heavily criticised in the past, for the title in the 2021 London Mayoral election under the Workers Party of Britain banner.