I HAVE always been particularly disgusted by political violence. The political sphere is meant to be one of words, words later translated into actions through policy and law.

Through our reason, language and ideas do we decide which ideals and opinions are best suited for our current needs. Debate may separate us politically, but unite us personally.

Once actions begin to infect the sphere of discourse the effects can be extensive, and there are few examples when the result has been at all positive.

In recent years, particularly since 2016, a boiling point appears to have been reached when violence, intimidation, underhandedness and demonization of ones opponents risks becoming the norm.

Those who justify these methods constantly refuse to see the hypocrisy and the harm they are inflicting upon the very way of politics that we depend upon now more than ever.

It is generally hoped that those in who engage in politics contain more decorum than what would be expected in a primary school playground, yet this is not always the case.

Since 2016, two of the biggest political decisions of our time came to be in both the United Kingdom and the United States; Britain’s decision to leave the European Union and the 45th presidential election of Donald Trump.

Both campaigns resulted in a more favourable outcome for those on the Right. However, neither event were conducted correctly nor the same conduct is being passed as the norm today.

‘I don’t believe in violence…unless someone is a fascist’

A statement made all too often. Does this mean we are suffering from an increased case of fascists, or simply an increase in the number of people who are willing to resort to violence the moment they feel they are allowed to?

Aside from the statement being self-contradictory, I advise anyone reading this to rid themselves of any friends they have who make such claims.

Fascism is defined as, “A political system based on a very powerful leader, state control, and being extremely proud of country and race, and in which political opposition is not allowed”.

“I never attribute malice to anyone, when it could easily just be stupidity” – Ben Shapiro. Political Commentator

I do not support Tommy Robinson, however I cannot help but notice how those who oppose him hyper inflate the word ‘fascist’.

Tommy tries to debate with antifa members in England.

As his views align against the religion of Islam and mass-immigration, the charge is often brought against him for racism.

However, as he does not align with enough of the other requirements to qualify as being a ‘fascist’ it is intellectually dishonest to refer to him in that manner.

By labelling someone in such an extreme way, dialogue becomes almost impossible.

War too often begin through a lack of dialogue, yet are often resolved through negotiation…discourse.

To hyper inflate the word ‘fascist’ is a grave error which we do at our peril.

When we desensitise ourselves to such a phrase, we may one day allow those who genuinely believe in an authoritarian super state to emerge.

You may believe the boy who cried wolf 50 times out of moral compassion, but on the 51st time would you really believe them anymore?

“If you want a picture of the future, imagine a milkshake splashing on a human face forever” – The 5th Columnist

Thus far in 2019, Jeremy Corbyn, Nigel Farage, Carl Benjamin and Tommy Robinson have all been assaulted whilst campaigning. 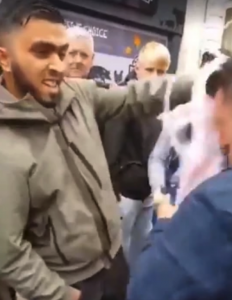 Tommy assaulting whilst campaigning for the European Elections.

Many incredibly brave and morally flawless individuals on the internet, even some business brands, praised the actions of those responsible and encouraged others to do the same.

Violence should be condemned at every turn and those who encourage it or stubbornly refuse to condemn it through misguided loyalties have a special place reserved in my heart for contempt.

Rather than deploy a well thought out and intelligent response to your political opponents ideas, many come armed with a milkshake and an unearned sense of moral superiority that they gain from assaulting people who they think are fair game.

True moral character can be judged on what people do when they think they can get away with it.

As I write, Twitter is filling with reports of violence breaking out in Salford during a rally and a party leader being corner in his campaign bus by men in hoods. The reason behind these events are simple, the existence of people with different opinions who have forgotten how to behave.

Politics should never be conducted via mob rule in the streets. There are no examples of anything aside from pure chaos being the result.

Yet people continue to engage in it.

Name calling (done incorrectly), demonising your opponent on character rather than policy and believing that violence can be justified once a post of Facebook gives the nod is what our politics is being infected by.

Anyone reading this who engages in such politics in any other manner aside from the civil exchange in ideas, I implore you to reconsider yourself.

As shown by the results of 2016, this is how you ensure you lose the debate.