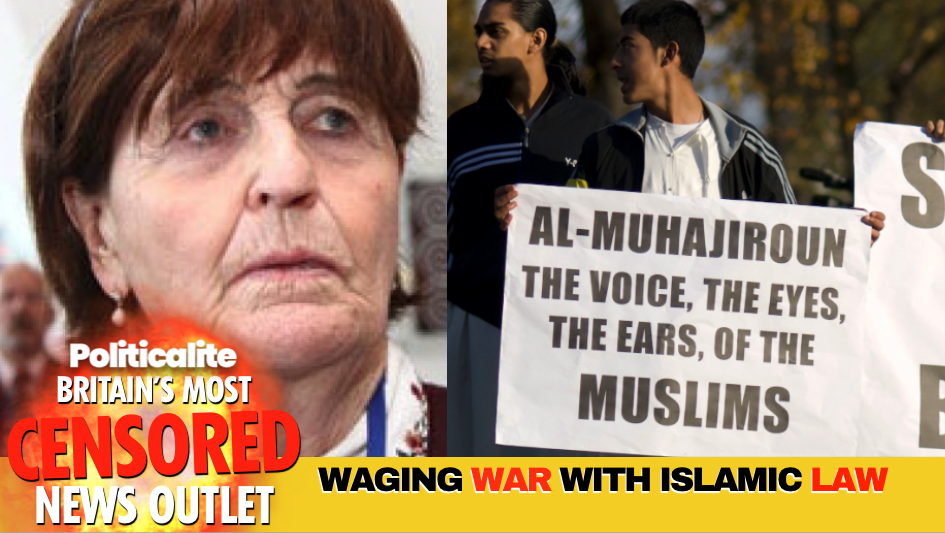 BARONESS Cox, a cross-bench member of the British House of Lords and founder and CEO of Humanitarian Aid Relief Trust, has bravely campaigned against the backward, oppressive Sharia legal system for decades.

The former Deputy Speaker for the House of Lords, who came under fire in 2010 for inviting Geert Wilders to the UK, is crystal-clear on her stance against the medieval sexism encompassing Islam and Sharia:”Several tenets of Sharia Law, as interpreted by many Sharia Councils and courts in the UK, are inherently discriminatory against women” she said.

“The asymmetrical access to divorce (the man merely by saying ‘I divorce you’ 3 times; the woman with no reciprocal right –or legal rights if the Islamic marriage was not accompanied by a legally registered marriage); polygamy whereby women may be married into polygamous marriages without their knowledge or consent – in a country where bigamy is illegal; the sanctioning of domestic violence under the righto ‘chastisement’; massive pressures on women not to seek help outside their community in case it would bring ’shame’ on the family or community.”

“We have to use our freedoms to speak out on behalf of those denied their freedoms and suffering from the effects of Islamic radicalisation and related policies” she continued, going on to confirm her concerns over recent censorship.

When asked if she believed that politicians were too scared to campaign against extremism and Sharia Law for fear of being wrongly labelled ‘racist’ or ‘Islamophobic’, and for her thoughts on the potential threat to democracy caused by demographics and the rise of the far-left, Baroness Cox said:

“Yes! This is why it’s been useful to highlight these concerns under the valid concerns over ‘gender discrimination’ in a country where we are committed to promoting equality – and the threat to the fundamental principle of ‘One Law For All’ in the country where Magna Carta was signed over 800 years ago!”

“Perhaps linked to a concern that demography will have a significant detrimental effect on democracy: the Henry Jackson Society published important research finding on differential birth rates among different faith communities (I think) in marginal constituencies. Some of my Muslim lady friends tell me that men in some of their communities may have 20 children – with clear implications for the vulnerability of youth to radicalisation and implications for democracy.”

The Peterborough Labour Party: A warning on cultural voting

“We have experienced this [rising left-wing ideologies] for decades (I was formerly Head of the Department of Sociology in the then Polytechnic of North London with a Faculty of 20 staff,15 of whom were Communist Party or further ‘left’). I co-authored a book highlighting the serious implications. Aware that this was not only occurring in this college: ‘The Rape of Reason: The Corruption of the Polytechnic of North London’. My life-saver was Bernard Levin who wrote 3 op-ed articles in ‘The Times’, saying this was the most important book for democracy he had read for years.”

“Also in response to your question, just ask where the left-wing feminists are in response to the suffering of Muslim women from gender discrimination in our world today?!”

Jamaal Uddin, aka ‘The Ginger Jihadi’.

The Baroness, who has in recent years traveled to some of the world’s most extreme and dangerous Islamic countries to help save women under persecution from Sharia Law, also sarcastically alluded to the true reason why Britain continues to allow Saudi Arabia to sponsor mosques and to infiltrate Islam in the UK with extreme Wahhabi beliefs and anti-Semitic, anti-western messages.

“Your guess is as good as mine!” She replied, tongue-in-cheek”. “Could it be something to do with oil and the sale arms?…”

Caroline Cox has granted permission for her insightful report, ‘A Parallel World: Confronting the abuse of many Muslim women in Britain today’, along with her personal account of the genocide against Christians in Nigeria, to be published in Jay Beecher’s latest book, ‘The Fifth Column: An Investigation Into Islamic Extremism’, out this Summer.