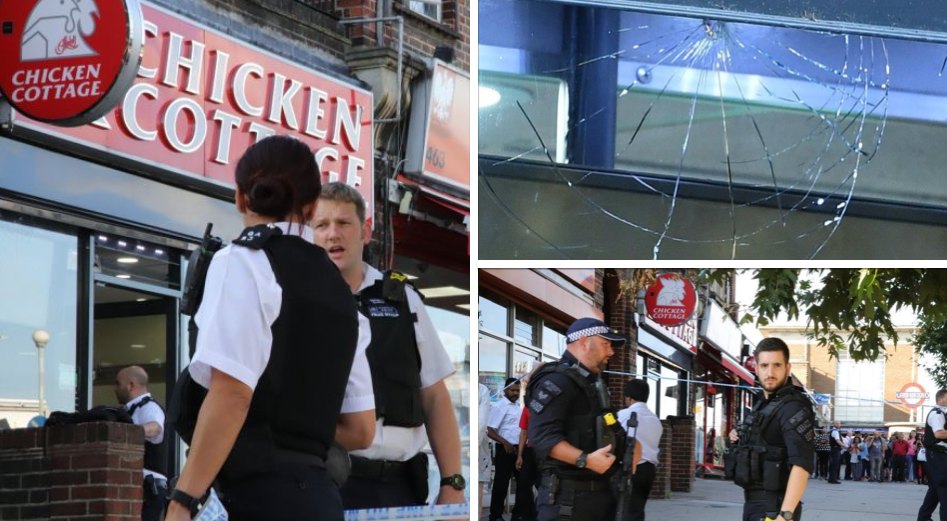 TWO-MORE young men were gunned-down in London last night in another horror case of gun-crime in Khan’s London.

The youths aged 18 and 24 were gunned down in a packed high street by balaclava-wearing moped thugs as London’s city-wide gang war bloodbath continues.

The victims, aged 18 and 24, were found with gunshot wounds close to Rayners Lane station in North West London – just five miles from where three people were gunned down on Monday night in Kingsbury.

Two other men, aged 18 and 25, who were with the victims at the scene, were arrested on suspicion of attempted murder.

Armed cops were scrambled at around 5.09pm yesterday after the gunman fled the scene on a moped along with an accomplice according to The Sun.

One eyewitness said: “I heard two shots and then a scream and another three or four quickly after that.

“I saw a moped drive by the front of the shop and on the pavement and they looked like they had a balaclava on.”

The Met said: ‘A male is reported to have fired shots at another group of males before fleeing the scene with an accomplice on a moped.

‘Officers attended along with specialist firearms colleagues. ‘Two males suffering from gunshot wounds were located in the garden of a nearby residential address having fled the scene.

‘Two males have been arrested on suspicion of attempted murder; they have been taken to a west London police station. A crime scene is in place. ‘Enquiries are ongoing to establish the full circumstances around the incident and officers continue to trace the males on the moped.’

Anyone who witnessed the incident or has information is asked to call police in Harrow Police on 101, Tweet @MetCC or call Crimestoppers anonymously on 0800 555 111 quoting CAD 5594/21 Aug.

WHAT A JERK: Dawn Butler should be fighting for blacks and highlighting the major Social Issues facing young black men, not crying over so-called ‘Cultural Appropriation’