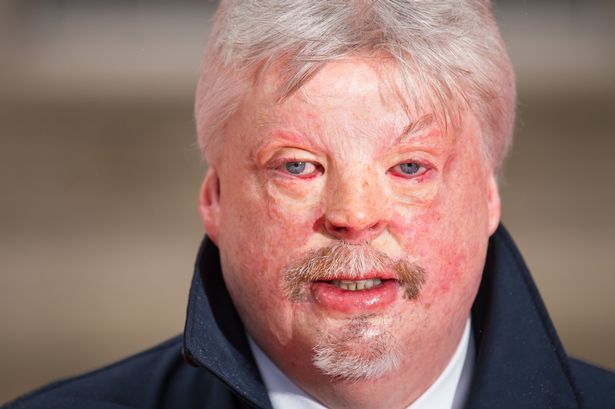 KAY Burley compared the Burqa to a Falklands War Hero’s Facial Burns in a heated debate with a Tory MP on Sky News after Boris compared the burqa to ‘letterboxes’.

Boris described the burka as “ridiculous” and “weird” and said women wearing them looked like letter-boxes or bank robbers.

Burley asked Tory MP Andrew Bridgen if he was ‘offended by the face of a famous Falklands veteran with a horribly burned face because it’s hard to read his expressions, in the same way you can’t read the expressions of a woman in a burka.’

Mr Bridgen responded and said: ‘A burqa may be removed, but Mr Weston will never be able to remove the physical and emotional scars of his experience. ‘

The Sky News presenter later cut him off and turned her back to end the interview after he defended Mr Johnson.

“People do not want a vision of our country thrust down their throat either by me, by Boris or by anybody else.”

Kay Burley said: “Great to talk to you as always.”

Mr Bridgen had not stopped talking and continued: “That is the great thing about living in a democracy.”

Ms Burley then turned her back on the Tory MP and said: “Absolutely, good to talk to you.”

UKIP attacked the Sky News host and said: “Crass and idiotic ‘journalism’ from @KayBurley of @SkyNews comparing the wearing of a Burqa to the facial scars of Falklands War hero Simon Weston.”

Twitter also condemned the presenter, with one user saying: Burley had ‘lost the plot’.

Ben Walker said: “You are trying to defend something which represents nothing but the domination of women.

Then to compare it to a decorated war hero later in this interview is indefensible.”

Christine Hamilton said: “What the hell is @SkyNews doing still employing @KayBurley after her crass, appalling comments – would be unbelievable except from her. She is an embarrassing disgrace but all too typical of #MSM #SimonWeston #P45”