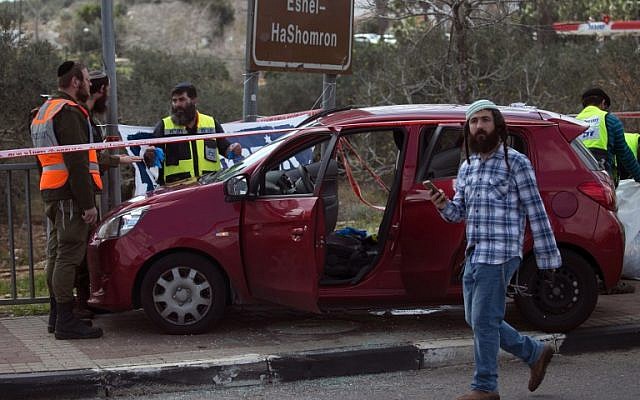 A GUNMAN opened fire in Israel’s West Bank at the Ariel Junction after grabbing weapon from one victim, then carries out second attack at nearby Gitai Junction; IDF searching for attacker.

One Israeli was killed and two were critically injured in a pair of shooting attacks in the northern West Bank on Sunday, the military said.

The attack began at around 9:45 a.m. near the Ariel Junction, where the terrorist assaulted a soldier with a knife and managed to gain control of his weapon, IDF spokesman Lt. Col. Jonathan Conricus said.

The attacker then fired at passing vehicles, hitting a civilian in the first vehicle. A second vehicle was hit, but managed to flee the scene. A third car stopped, and the attacker, whom Conricus said “appears to be a Palestinian,” took it and fled the scene.

“I saw the terrorist. He fired at my vehicle and I ran away while it was still running. The terrorist then stole the car, and I saw him continue driving in the direction of Tel Aviv,” the driver of the third vehicle told the Ynet news site.

Conricus said that the suspect then continued to the nearby Gitai Junction, where he shot at a soldier standing at a hitchhiking post, injuring him.