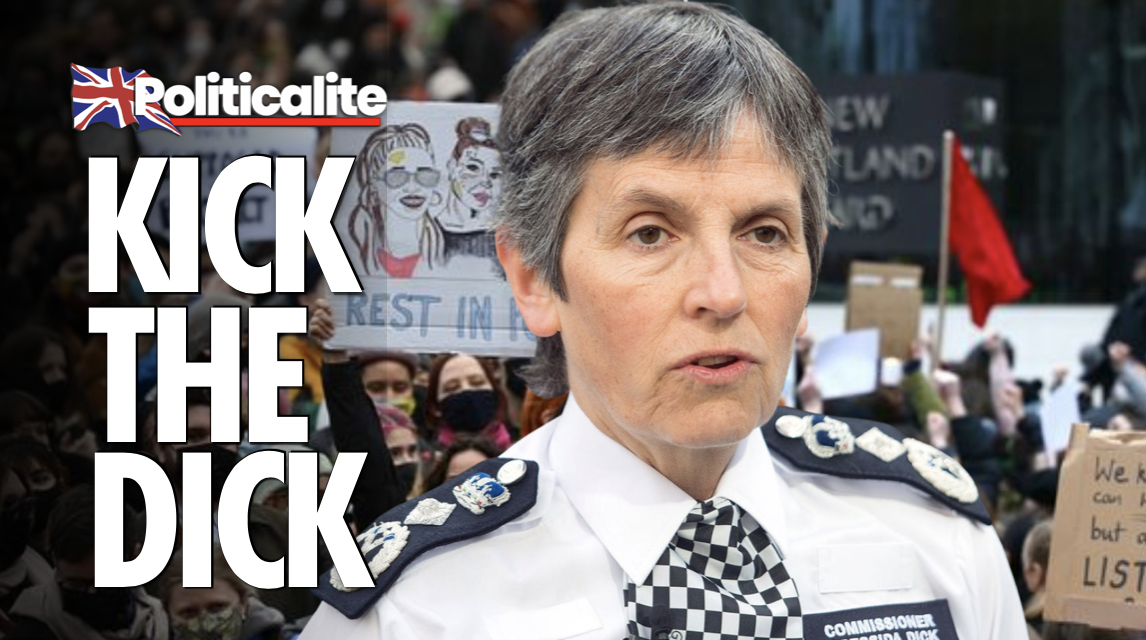 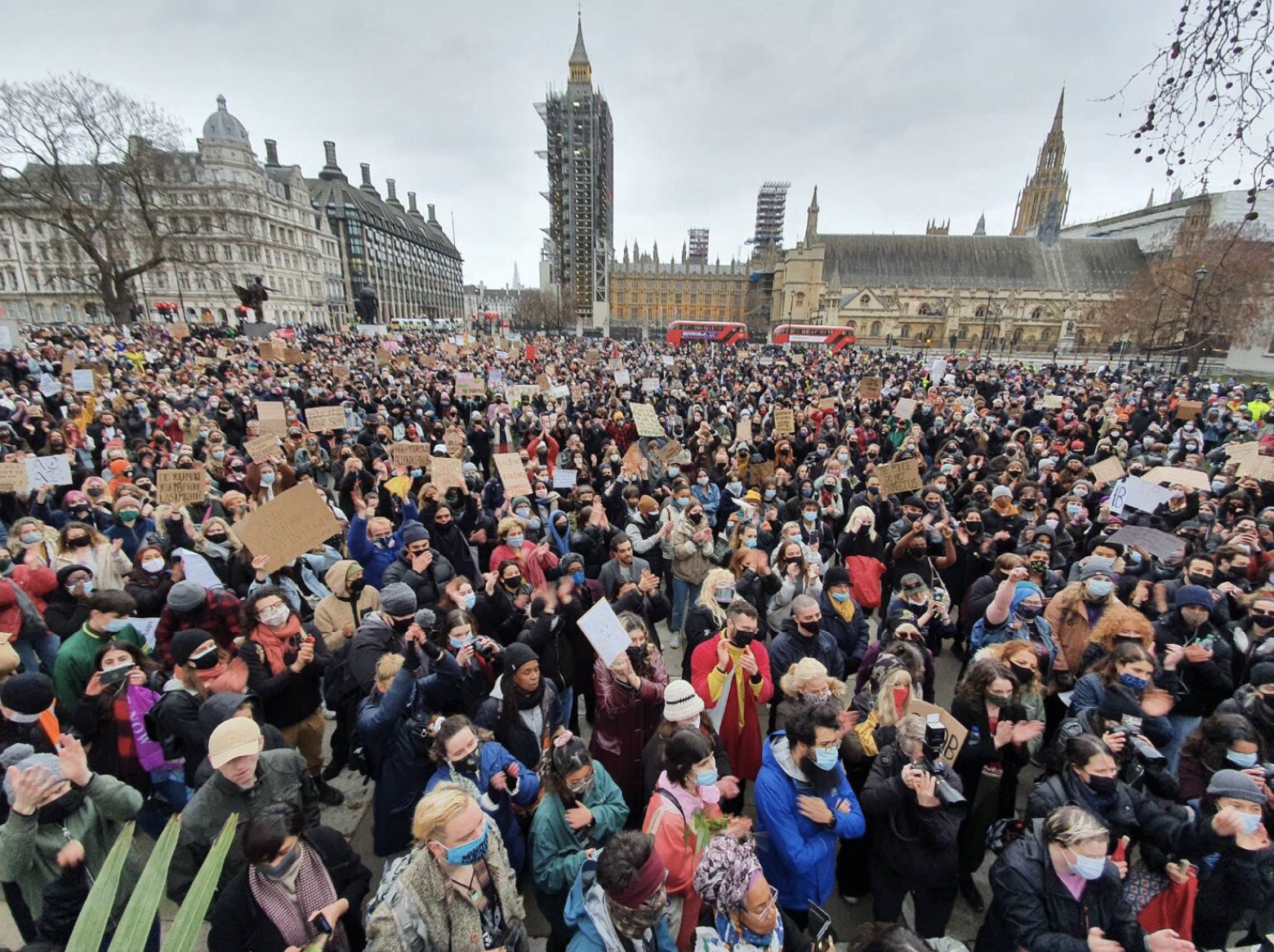 On Sunday, the group tweeted: “Police are perpetrators of individual and state violence against women – as evidenced last night.

“The police abuse the powers they already have, yet the government plans to give them even more powers in the #PoliceCrackdownBill.

“We must resist this.”

Banners in the crowd said “Men your silence is deafening” and “Cressida you’re a woman too”, while protesters shouted: “Sisters united will never be defeated.” 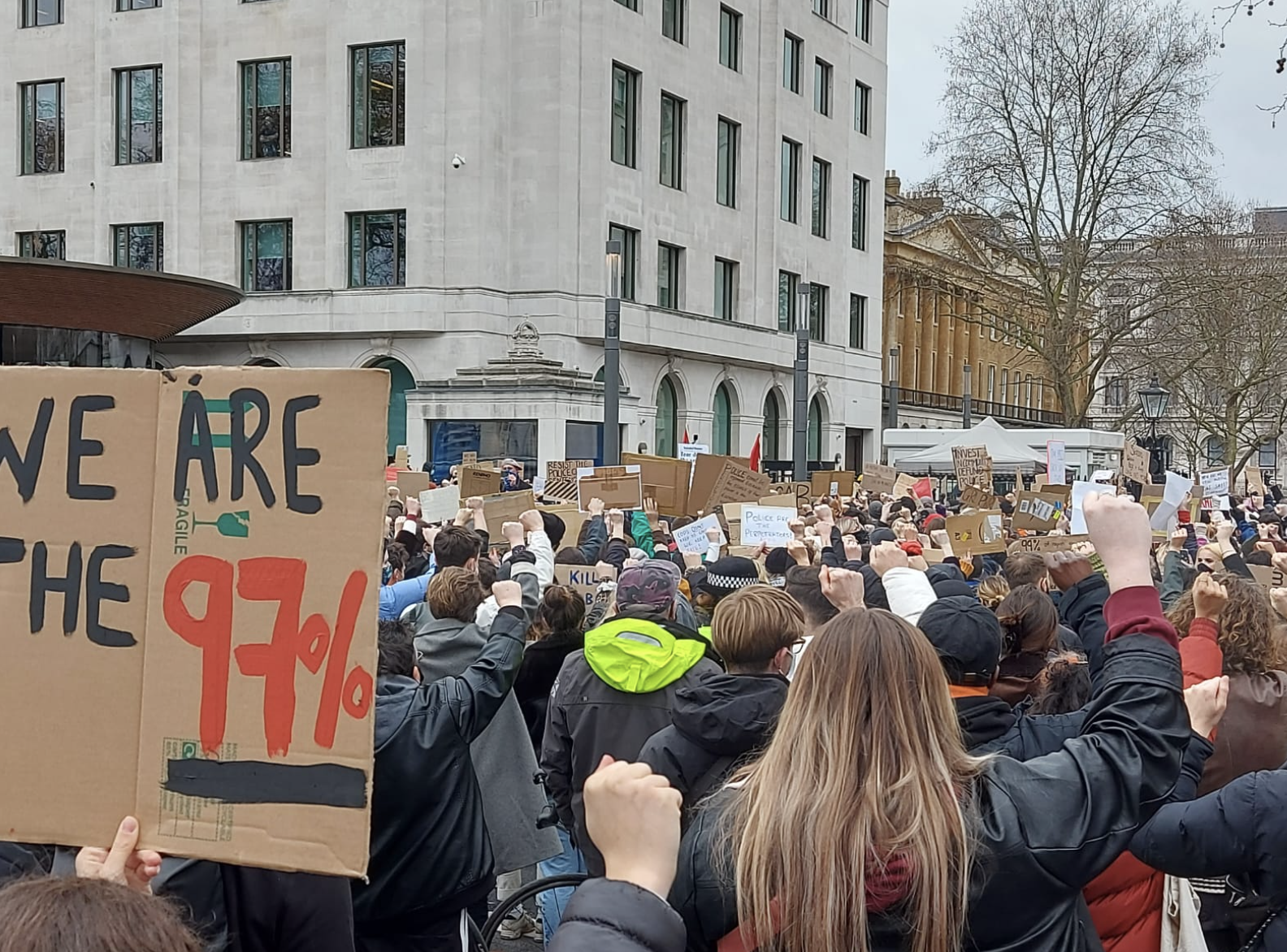 Signs included messages such as “Times up Priti”, “End state violence”, and “Abolish the police”.

Others said “I need to be able to tell my children I did not stay silent” and “Enough is Enough”, while one said “You don’t protect us”.

The group chanted: “Say it loud, say it clear. Brutality’s not welcome here.”

A placard in the shape of a gravestone which had been placed beneath the New Scotland Yard sign was removed by officers before the majority of protesters arrived.

A bunch of flowers at the base of the sign had an accompanying note that said: “These are my Mother’s Day flowers. This is not my country.

“I am grieving that women are assaulted whilst grieving for women killed + assaulted.

“Women are rising up + you are fuelling their fire.

“There is no greater force than life givers standing shoulder to shoulder. Stop. Listen. Act.”

The protesters left New Scotland Yard and marched to Parliament Square where they chanted “Kill the bill”.

The crowd clapped when an announcer said everyone was there to remember Sarah Everard.

A minute of silence was held in which the demonstrators lay on the ground.

Student Ada Wordsworth, 22, from London, said she attended to pay her respects to Ms Everard, but also to express opposition to the Police, Crime, Sentencing and Courts Bill and the “attempts by the Government to quash protest”.

This is just the beginning.

She told Politicalite: “I think there’s just been a really amazing feeling of solidarity between everyone here.”

Ms Wordsworth added: “I think if the Bill goes through this week then there will be a lot more protests and they will be bigger and I think it’s going to massively backfire on the Government.

Meanwhile, in the evening, protesters gathered in Whitehall outside the gates to Downing Street where police officers formed a line.

They then made their way back to Parliament Square where they held aloft phone lights as day turned to night in the capital.

By 7.30pm, a smaller group of about 100 people had gathered around the statue of Sir Winston Churchill which was being guarded by police officers.