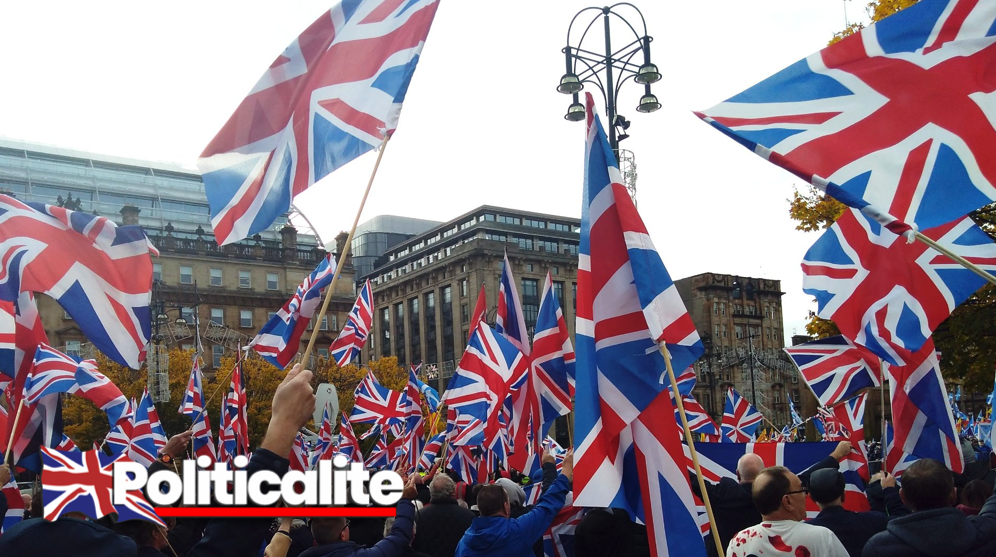 AN SNP Cabinet Secretary has branded a counter protest group’s photos against a second IndyRef as ‘faked’ in mocking tweet.

Mike Russell, Cabinet Secretary for Government Business and Constitutional Relations, including Brexit negotiations, said photos in a national newspaper given by Unionist group ‘A Force for Good’ must have been doctored.

In the tweet he said: “I spoke from the stage and you couldn’t see the so called ‘Demonstration.” This was in reply to Nats saying there were only 20-30 at the counter protest. 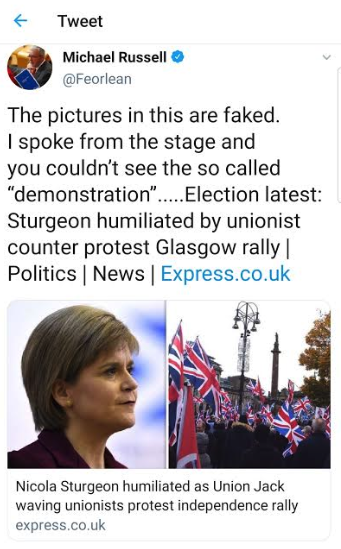 A Force for Good Founder and Director Alistair McConnachie stated: “It is deeply worrying that a person in his position would think and behave like this and make such a fool of himself publicly. We invite him to present evidence of his ridiculous claim.”

Mr McConnachie thinks Mr Russell “Reacted to his fear by lashing out like a fool.” He added “He would hate that there are people in Glasgow who will stand up and show him and his party that they do not speak for all of us.”

He explains the timeline of events: “What we know is that Michael Russell claimed, shockingly, that the very clear and colourful photographs of A Force For Good in George Square during the SNP rally on Saturday 2nd Nov, were ‘faked’. What we also know is that the Daily Express has told us that it received ‘complaints’ that the pics were ‘photo-shopped.”

The Unionist group counted at over 300 at their protest and Megan Burns, photographer for the group, was angry that a SNP official would act so irresponsibly on Twitter.

“It just goes to show that they are resorting to lies as they are afraid at how our numbers are growing at each event we organise.”

“People are waking up to the reality that the SNP are destroying Scotland with this obsession with Independence.”

Megan added she was trolled so badly that police involvement was needed against a Scottish Nationalist account on Twitter. 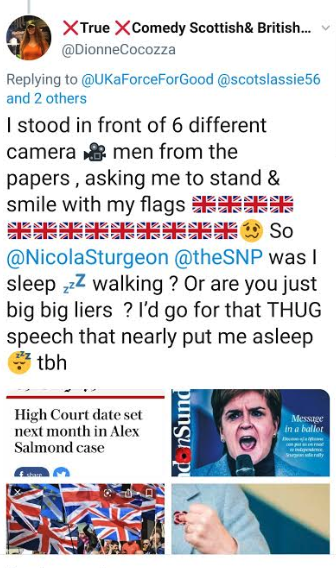 “I was trolled all week after the IndyRef Rally but one anonymous account was so vicious it was necessary to get the police involved.”

Dionne Cocozza a member of the group who supports The Brexit Party was angry at Mike Russell adding fuel to the fire in the tensions between Scottish people.

She angrily backed up Megan’s comments by saying that the SNP have “Corrupt lying MPS who entice hate on Twitter. She wants everyone to “Have a right to democracy and feel safe.”

She challenged the First Minister, Nicola Sturgeon: “She started this Indy 1 and 2, a chaotic mess and also turns a blind eye to slander.”

A Force for Good were also vindicated when a group of five men ran into the counter protesters trying to grab their Union Jack flags from them.

Dionne was handing out Union Jack flags at the event. She stated: “I was standing right next to them & these men came out of nowhere considering how many police were around us.”

Another member of the public said: “Sturgeon saying Scotland is open to everyone. At the same time, her extremist Nationalist followers were being arrested, screaming sectarian abuse and making cut throat gestures to Unionists in George Square.”

Police Scotland stated two arrests were made at IndyRef2 in Glasgow last Saturday.

Their Press Officer said: “Here is the only line for this one. Two arrested for minor offences” at the IndyRef Rally on Saturday.

No one at the SNP Media Office or Mike Russell have replied to Politicalite after numerous attempts to give them a right to reply.

A couple of examples of the many comments made on Twitter at last week’s Politicalite story on the IndyRef:

“Och nonsense! That idiot holding the camera and her wee pal agreeing with her are making up stories for a right wing facist website called political lite… no reports of any violence even in the usual MSM sources … I call bullshit.” SandyBBFan

“You’ll get wiped out at the election then you can fuck off to wherever racist xenophobic bigots are welcome? Certainly not in Scotland. Times are a changing you gammon dinosaurs.” FraserRimsBill

Haha. What a lie! How desperation works! Lol. There was no one fighting, just you lot being silly buggers! The police had everyone separated, we were all waving and laughing at you! Especially your dolly dimple pal.” IndySoonTaTa

“No victims or witnesses being questioned. No arrests being made. No other yoons jumping up and down shouting about it. Calls herself a journalist? This has to be the joke of the week.” Save The Wild Cat Hannah

“Funny there is no police record of this. I know, I checked.”