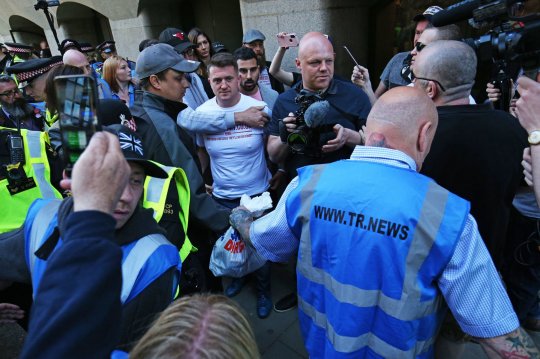 “THE WELFARE of the people is a supreme right.”

That’s the quote painted on the grand ceiling of Britain’s Old Bailey In Central London.

Politicalite attended the Trial of Mr Robinson, whose real name is Stephen Yaxley Lennon to cover the latest attempt by the British state to silence one the countries most popular political figures.

To highlight the absurdity of the trial, Robinson is currently vying to be the North West’s MEP in the upcoming European Elections – yet Britain’s Establishment is now trying to stop that from happening by forcing Tommy to stand a RE-trial of allegations of ‘Contempt Of Court’ after he reported on the case of Muslim grooming gangs and was jailed last summer.

Tommy is winning the hearts and minds of the British working class, and his huge campaign events on left behind council estates across the North West are proof Robinson is likely to win a seat as an MEP.

Refusing to be deterred – Robinson, 36 rocked up to court with a crowd of thousands and turned the event into a Trump-style campaign rally with *literal* media bashing and a true sense of revolution in the air.

Tommy is becoming a major political force, the events on Tuesday and how the crowd reacted was proof of that.

Ezra Levant of The Rebel Media – one of Robinson’s allies flew in from Canada to try to free the British from what he sees as “a time machine into the future” of what could happen in his native Canada.

Levant crowdfunded to bring dozens of independent media figures to come along to report on the case without the leftist Media view, and working-class Politicalite was one of them.

Mr Robinson has already been hounded by Britain’s court system and now Tommy is set to face a re-trial on July 4th… but why that date? Because if he wins and becomes an MEP – that would the day he would be set to walk into the European Parliament.

He’s already been hounded by the court system, but why is this one man so important? It’s simple. It’s about every person like him.

Tommy is a normal down to earth working-class lad whose perseverance has paid off.

He’s passionate about what he believes in and he has every right to be able to hold his views – hugely popular views, and has a right to challenge radical Islam, frankly – he’s the only politician prepared to do so. Despite this – the Establishment wants to shift the balance of power away from Robinson in every way they possibly can.

Tommy has been fighting against issues that working class people care about for decades.

NO RESPECT: Manchester Arena SLAMMED over Islamic Propaganda Advert
“I’M GOING FOR IT!” Boris DECLARES leadership bid to save Tories
To Top