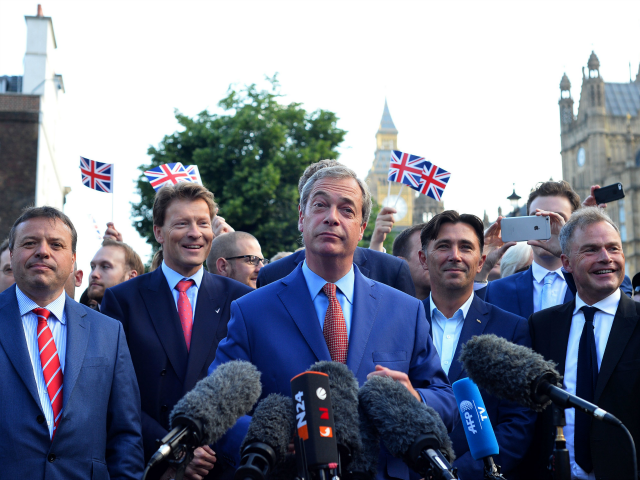 NIGEL Farage has returned to frontline politics to fight for Brexit and has said he will work with Leave Means Leave and tour the country following Theresa May’s Brexit clusterf*ck.

Nige said he will fight the Prime Minister’s “fraudulent” EU withdrawal plans which critics have branded ‘Brexit In Name Only’.

Farage told The Telegraph: “It is now beyond doubt that the political class in Westminster and many of their media allies do not accept the EU referendum result.

They refuse to acknowledge the wishes of the majority of those who took part in that historic plebiscite of 2016 by voting to leave the European Union.

As far as I’m concerned, this is the worst case of Stockholm syndrome ever recorded.

It is equally clear to me that, unless challenged, these anti-democrats will succeed in frustrating the result. Whatever they may claim publicly, this is their ultimate objective. They think nothing of betraying the citizens of Britain.

For months now we have heard the same argument from this bunch: “Leave voters did not know what they were voting for.” The implication is that Brexiteers are stupid and should submit to the superior view of our betters.

Well, I’ve had enough of their lies, deceit and treachery. The time has come to teach them a lesson – one that they will never forget.

The 17.4 million people who voted for Brexit did so because they wanted an independent United Kingdom. They wanted to live in a country that makes its own laws and is in charge of its future. They did not want to be governed by the unaccountable bully boys in Brussels.”