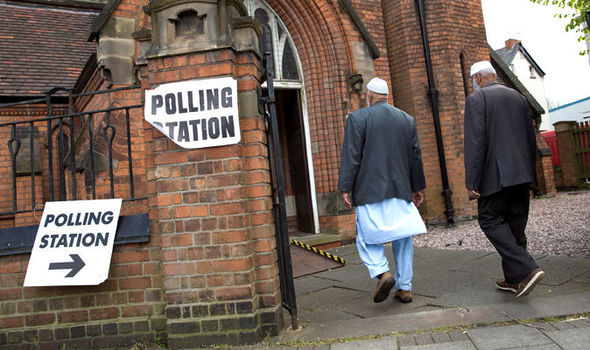 MOSQUES across Britain are taking part in the UK’s biggest ever National Muslim Voter Registration Day on Friday 22nd November and are encouraging worshipers to “get out and vote” as its revealed that Muslim voters could swing 31 seats in the General Election.

The Muslim Council of Britian – which represents British Muslims claims that votes by Muslims could affect 31 constituencies and swing the result.

The seats that could swing include working-class areas such as Bolton North East, Dudley North, Peterborough and Dewsbury.

Muslim voters are expected to have a “medium” or “high” impact, said the body.

SEATS THAT MUSLIMS COULD SWING

Mosques in Finsbury Park in North London, Birmingham’s Central Mosque, and Masjid Alhikmah and Community Centre in Aberdeen have all called on its worshipers to register to vote.

Nasir Mahmood, Deputy Chair of Birmingham Central Mosque, said: “It is the civic duty of every citizen – Muslim or not – to exercise their democratic right to vote. As community leaders, we must do our utmost to help our members participate as fully in the election as they wish to. This initiative is key to engaging our communities and helping Muslims make their voices heard this election.”

Harun Khan, The General Secretary of the Muslim Council of Britain Secretary General, said: “As active participants in our society, Muslims – in all their diversity – can play a significant role in what may become a close election, and we hope that the parties listen and reach out to Muslim communities across the country to engage on issues of concern.”