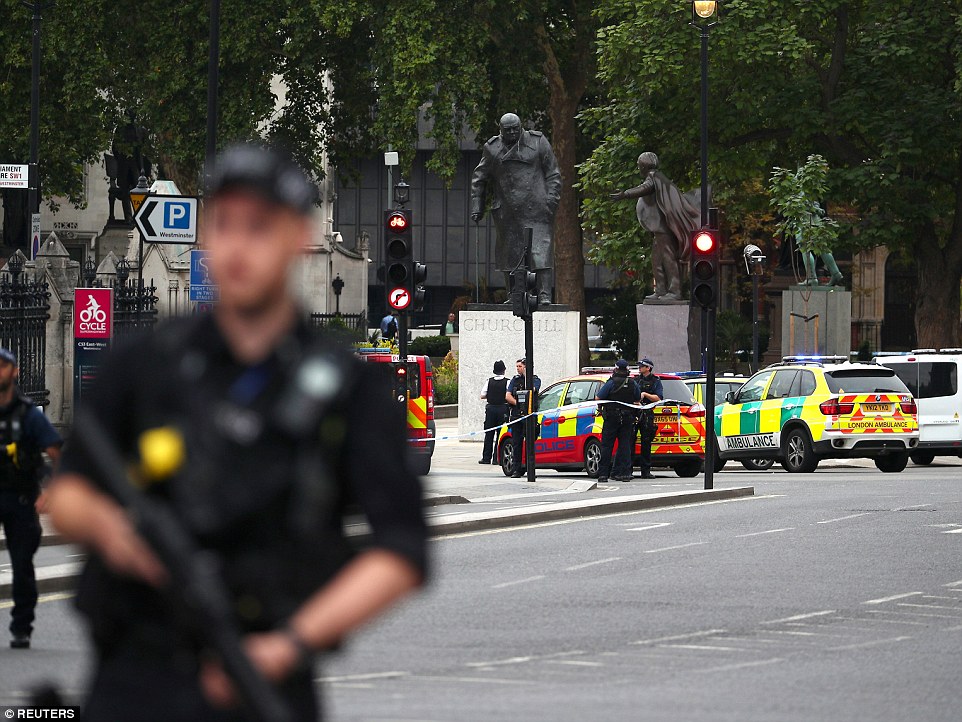 TERROR Police are investigating after a car driving at 50mph ploughed into pedestrians and a barrier outside the Houses of Parliament in London.

The attacker is not currently co-operating with Met Police and he is not known to Mi5 or the Security Services.

The driver, described by MailOnline as being black and wearing a coat, was pulled from the smoking silver vehicle by around a dozen armed officers who had their rifles trained on him following the rush hour smash.

A ‘loud bang’ echoed around Parliament Square at 7.30am and witnesses said the car was travelling at up to 50mph and appeared to ‘intentionally’ swerve towards Parliament and smashed into a security checkpoint barrier.

Two people were treated for their injuries in hospital but they are not fighting for their lives.

Initially police were treating it as a road traffic collision but two hours later the force said: ‘While we are keeping an open mind, the Met’s Counter-Terrorism Command is leading the investigation into the incident’.

Ewalina Ochab saw the incident and said: ‘I think it looked intentional – the car drove at speed and towards the barriers’, while witness Jason Williams said: I saw at least 10 people lying down. I had to run for my life.’

More than 200 officers have been sent to Westminster who moved members of the public away from the area in every direction.

Specialist officers and sniffer dogs ‘sanitised’ the scene – a term used when checking for a bomb or dangerous chemicals.

The Houses of Parliament is closed after the incident, but MPs are away because it is during the summer recess.

The crash came 17 months after Khalid Masood drove into pedestrians on Westminster Bridge – killing five – before stabbing to death PC Keith Palmer at the gates of Parliament.