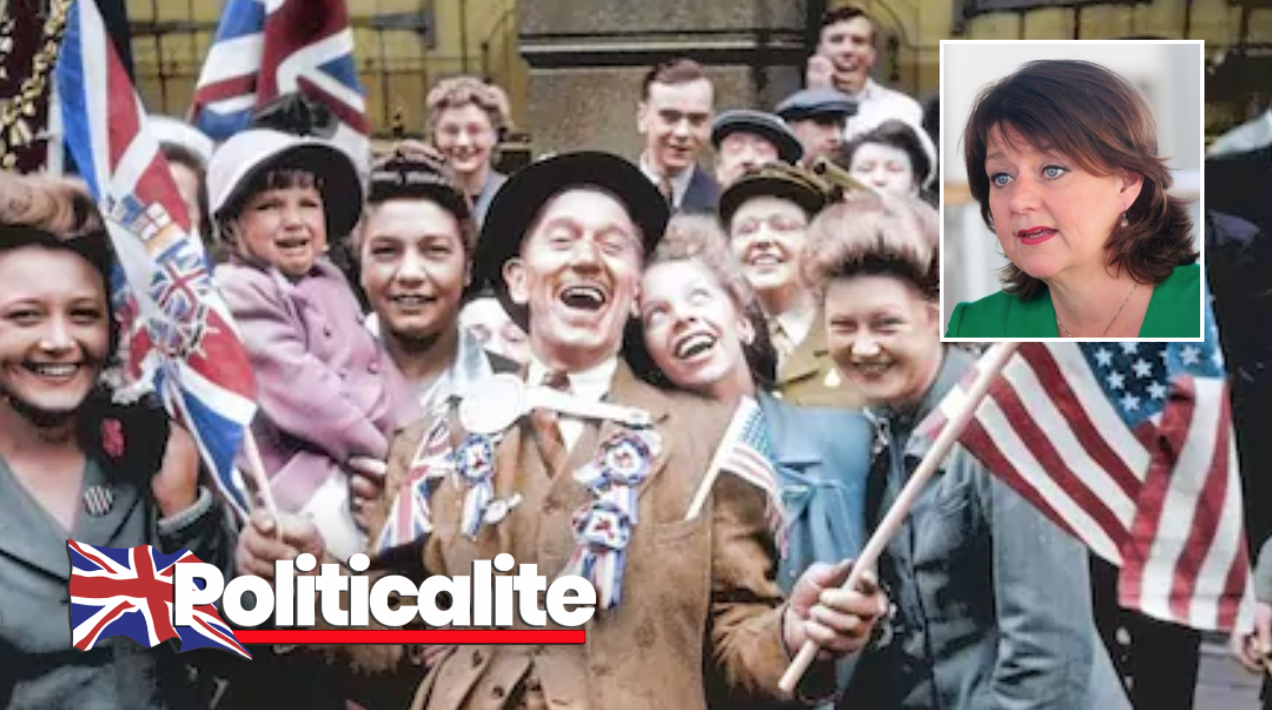 BRITAIN celebrates the 75th anniversary of the Victory in Europe day, when  Nazi Germany surrendered to the Allies in the Second World War.

Leanne Wood however, the former leader of the Welsh nationalist party Plaid Cymru, used it to sympathise with those who felt it was ‘jingoistic nonsense’ to celebrate this victory.

She responded to a tweet by Miles King, a representative of the environmental campaign group People Need Nature. In it, he claimed that while he understood ‘why Britain celebrated VE day in 1945’, he felt that it was wrong to be ‘implored to “celebrate the 17th anniversary of a war which killed 20 million people’. He concluded that it was ‘jingoistic nonsense’ and that it was ‘better to reflect on the horror of war & celebrate 75 years of relative peace in Europe’. Wood shared sympathy towards it, saying that she agreed ‘with this’, adding a pointing down emoji for good measure.

She then received a heavy backlash online for her stance. Matt Kilcoyne (the deputy director of the libertarian think tank the Adam Smith Institute) stated that she didn’t ‘speak for Welsh people’, that he was ‘proud to celebrate the liberation of Europe’ and he was honouring the ‘memory of my grandfather who fought Nazi tyranny’, and that it was overall meant to ‘celebrate the victory we Brits, with our allies, brought the world’ and not ‘forget their sacrifice’.

As ever, you don't speak for Welsh people. I'm proud to celebrate the liberation of Europe, to honour the memory of my grandfather who fought nazi tyranny. To celebrate the victory we Brits, with our allies, brought the world. And to never forget the sacrifice.

Welsh based Conservative supporter called Adam was more sarcastic, jokingly supporting Leanne’s suggestion of ‘let’s just forget what happens’ and not examine the ‘sacrifice that people made’ and ‘the horrors that were inflicted on millions’, adding a facepalm emoji at the end. Former Brexit Party Parliamentary candidate for Blaenau Gwent Richard Taylor called it an ‘all-time low’ for Wood, and Labour MP Chris Bryant openly stated his disagreement and felt that we ‘should celebrate the defeat of Nazism, the liberation of the death camps and give thanks for those who gave their all, remembering the horrors of war and committing ourselves to peace and human rights’.

Ah Leanne let’s just forget what happens eh? Never mind that it’s about remembering the sacrifice that people made. The horrors that were inflicted on millions so that hopefully it never happens again. That democracy and not tyrant won out. But no let’s not remember…..?‍♂️

This is on all time low for a Leanne Wood of Plaid Cymru ? We will celebrate VE Day with pride unlike you. #VEDay75 pic.twitter.com/2SG46Nh79b

I disagree with this. I think we should celebrate the defeat of Nazism, the liberation of the death camps and give thanks for those who gave their all, remembering the horrors of war and committing ourselves to peace and human rights. @LeanneWood apparently disagrees https://t.co/lhZ5AstLXJ

Wood  insinuated that ‘far-right trolls’ were the main ones targeting here and compared Wales to ‘North Korea’ because of the criticism against her.

The one thing the narcissists and my far right trolls can’t handle when they try to provoke an argument – and that’s being ignored.

You are all muted guys ???#DoOne

Some defended her, most notably that of King himself of who called her critics ‘alt-right’ and the distributors of the controversial White Poppy the Peace Pledge Union, who were ‘pleased’ at her stance, claiming the VE day celebrations ‘cheapen the suffering of millions’.

Another lesson learned – people are simply not allowed question & reject sing-alongs, street parties and recordings of Winston Churchill speeches as the best way to remember 75 years since the defeat of the nazis.

When did Wales turn into North Korea?

The inevitable alt right bot dogpile is clogging up my timeline so time to lock up.

We're pleased to see @LeanneWood objecting to plans to 'celebrate' #VEDay75 on Friday. We cheapen the suffering of millions by celebrating instead of mourning the dead and learning from the past. May the memory of #WW2 inspire us to work against war and fascism today. https://t.co/VSZZsHDZC8

ANOTHER ONE! Labour Councillor CHARGED With Postal Vote Fraud Amid “Substantial Evidence”
BREAKING: Rory Stewart DROPS OUT of the London Mayoral race
To Top