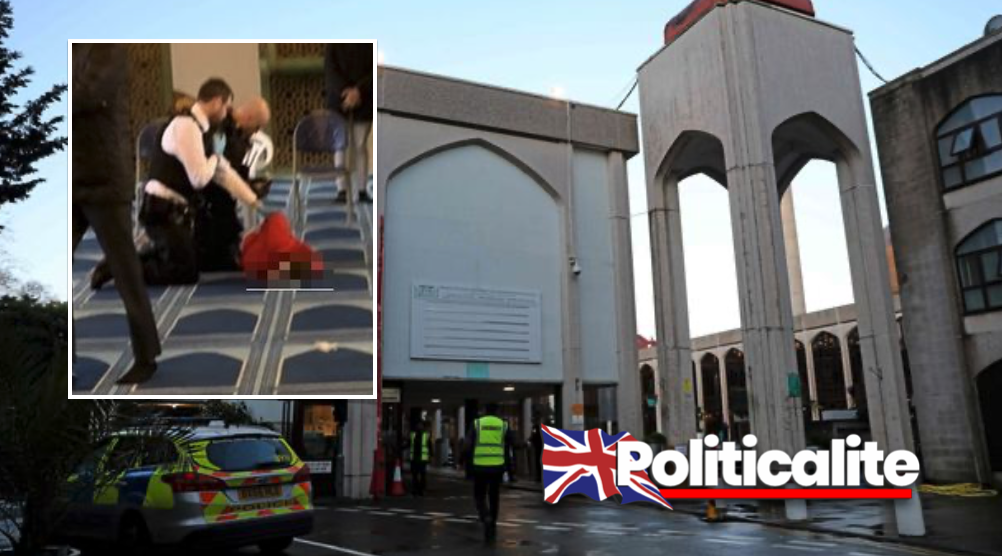 A MAN who attacked a seventy-year-old Muslim man with a knife at a London Mosque was a fellow worshiper, according to an eyewitness.

The victim was taken to hospital, where his condition is not life-threatening, and Scotland Yard is not treating the attack as terror-related, or seeking any other suspects.

Witnesses told how the suspect launched a “vicious attack” on the muezzin, who makes the call to prayer, at around 3pm.

Ayaz Ahmad, adviser to the mosque, said: “Everybody’s reaction was shock and horror, the men were screaming.

“It was a vicious attack. We live in a society where we hear a lot about knife crime and what have you but actually to physically be in a situation where you’re first-hand watching an attempted murder take place it’s very shocking.”

Abi Watik, 59, said the victim was stabbed once in the right shoulder moments after prayers had started and the attacker “was silent the whole time”.

“We were shocked, we didn’t know what happened, we saw the guy on the floor and blood on his shoulder and the knife on the floor,” he said.

The mosque said members of the congregation broke from their prayers and restrained the attacker until police arrived.

Mr Ahmad added: “It would have been life threatening if it wasn’t for the worshippers who helped stop the guy and apprehend him.

Mustafa Field, director of the Faiths Forum for London, told reporters outside the mosque that worshippers said it was “one stab, one strike, around the neck” of the victim.

“Then the congregation members, some of them broke their prayers, and intervened, restrained the individual,” he said.

“The mosque security called the police, and the police were there within minutes, and he was restrained and taken away.”

Images on to social media showed a white man in a red hooded top, jeans and bare feet being pinned to the floor by police officers inside the mosque, as others, including a small child, watched on.

One video showed a knife on the floor under a plastic chair.

Adnan Idha, 54, a regular worshipper at the mosque, said the suspect had been attending for around three months and had been seen with the victim in his office.

Mr Idha said: “He was close with the man who was stabbed, he would sit in his office with him.

He said the muezzin would often speak to new people at the mosque.

Mr Idha added he had seen the suspect at the mosque in the days before the attack.

A friend of the victim has described him as a “selfless” man who was well known among the community.

The victim has been named by mosque-goers as Raafat.
Waleed Mohammed said: “There is only one Rafaat in the mosque, his voice comes out of that minaret five times a day, for this to happen right at the end of his career is very, very sad for the whole Muslim community.”

Mr Mohammed, 39, told PA he thought the attacker came to the mosque to “scope what he wanted to do” and was not a regular worshipper.

Scotland Yard said the suspect was been taken into custody at a central London police station, adding: “The incident is not being treated as terror-related at this time.”

Forensic officers were seen at the place of worship on Thursday evening, around an hour before the end of evening prayer.

Chief Superintendent Helen Harper, of Central-West Borough Command Unit, said: “This was a profoundly shocking incident inside a place of worship and an urgent investigation is being carried out into the circumstances.

“Although we believe this to be an isolated incident, patrols have been increased around the area of the mosque to provide reassurance to worshippers and the local community.”

She added: “I would like to thank everybody in the mosque who helped to detain the man before he was arrested and continue to help my officers with their enquiries. I’m extremely relieved the injuries suffered by the victim do not appear to be life-threatening.

“However, this incident has undoubtedly caused a great deal of concern and we are working as swiftly as possible to establish the circumstances. No other suspects are being sought at this time.”

Prime Minister Boris Johnson tweeted: “I’m deeply saddened to hear of the attack at the London Central Mosque. It’s so awful that this should happen, especially in a place of worship. My thoughts are with the victim and all those affected.”

Mayor of London Sadiq Khan tweeted: “I’m deeply concerned by this incident at London Central Mosque.
“Every Londoner is entitled to feel safe in their place of worship & I want to reassure London’s communities that acts of violence in our city will not be tolerated.
“The Met are providing extra resources in the area.”

HIGH STAKES: How Britain’s Gambling Regulations Differ From Those In Canada