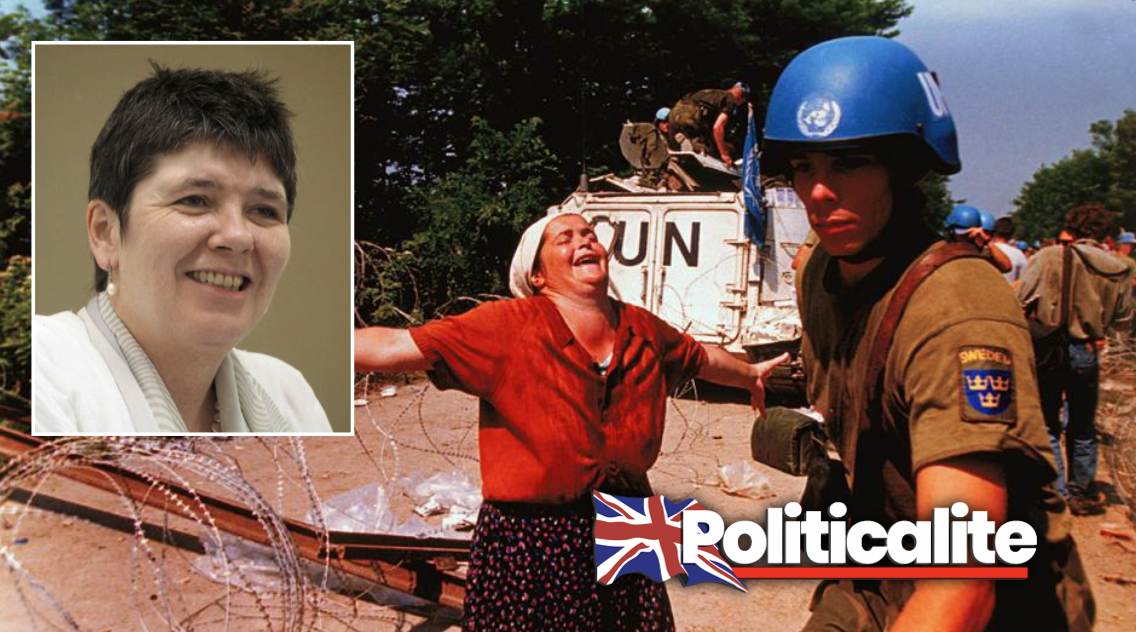 CONTROVERSIAL Ex-MEP Claire Fox who was appointed to the House of Lords, once denied the Bosnian genocide and ethnic cleansing massacres by the Serbian army during the Yugoslav Wars, it has been claimed.

In recently announced news, the House Of Lords appointments have included many Brexiteers of both sides of the political aisle, including former Conservative MPs like Henry Bellingham, DUP MPs like Nigel Dodds and Labour MPs like Kate Hoey and Frank Field. One name on there was Claire Fox; a former Brexit MEP, former member of the Revolutionary Communist Party and publisher of the Living Marxism magazine – of which Fox, along with editor Mick Hume founded in 1988 as a publication of the RCP – later rebranded LM. It’s that magazine’s original collapse in 2000, following a libel case against ITN which it lost, that has become contentious again; highlighting Fox’s and much of the intellectual left’s, denial of the Bosnian genocide and support of the Serbian forces during the Yugoslav Wars in the 1990s.

Back in the early 1990s, following the collapse of communism due to the Soviet Union dissolving, Yugoslavia started to crumble and disintegrate, with several of the country’s former regions declaring independence as sovereign states. This, coupled with the rise in ethnic tensions, following the death of its former dictator Josef Broz Tito in 1980 and the rise of nationalist politicians like Serbia’s Slobodan Milosevic, led to the beginning of the Yugoslav Wars, which would continue for the rest of the decade, and whose wounds are still felt across the region to this day.

The worst episode of this period was the Bosnian genocide, of which took place between the 11th-22nd July 1995, with 8,732 killed. This mainly came in the town of Srebrenica, which had been previously declared a ‘safe area’ by the United Nations, of which they were unable to defend. Following this, under the leadership of military commander Ratko Mladic, the Bosnian Serb forces carried out mass killings, rape, torture and the expulsion of 25,000-30,000 Bosniak Muslim men and boys from the area. This was among various other episodes which involved the Serb forces ethnically cleansing and attacking the ethnic Bosniaks, including the use of concentration camps and the Siege of Sarajevo respectively. It later led to life imprisonment in 2016 for the then Bosnian Serb leader Radovan Karadzic, as allocated by the International Court of Justice, after he was found guilty of 10 out of 11 charges, of which included genocide, war crimes and crimes against humanity. Mladic was found guilty on similar charges, leading to his life imprisonment in November 2017.

In response, the international community, led by NATO, responded by bombing the Serb forces. This led much of the intellectual left to defend the Serbs, under the guise of defending them against supposed ‘Western imperialism’, and LM, under Fox’s watch, took this line.

This mainly came with several essays disputing the main narrative surrounding the Serbs’ actions during the Yugoslav Wars, in particular the Bosnian War. In Living Marxism, an essay was published in March 1996 called ‘What’s in a ‘mass grave’?’ by Frank Furedi under the pseudonym ‘Linda Ryan’. It stated that ‘There is no hard evidence that 3,000, let alone 8,000, Bosnian Muslims were massacred in Srebrenica’, and that the United States’ involvement – of whose treaties helped to end the Bosnian War in late 1995 – was ‘not a noble crusade by Washington, but a self-serving attempt to occupy the moral high ground in international affairs’. They later interviewed people of who bolstered their case about Serbia, those being Thomas Deichmann, a German polemicist, and Peter Handke, an Austrian novelist who would later speak at the aforementioned Milosevic’s funeral. The former leader of the Bosnian Serbs Ravodan Karadzic, of who went unchallenged as he claimed that the Bosniaks were behind the Sarajevo marketplace massacre, not the Serbs who’d carried it out, stating that ‘It is quite obvious to anyone objective that Muslims have done it’.

The clincher however came in February 1997, whereby LM would publish an article by Deichmann called ‘The Picture that Fooled The World’, alleging that ITN  had lied over its coverage of the Serb forces’ treatment of the Bosniaks, mainly two of their detention camps. It stated that such camps were ‘not a prison, and certainly not a ‘concentration camp’, but a collection centre for refugees, many of whom went there seeking safety and could leave again if they wished’. This was despite the fact that ITN was a heavily reputable news organisation, and that the journalists involved in the initial story – Penny Marshall and Ian Williams – had encountered the images and camps first hand, all the while Durham University admitted that the claims made by LM and Deichmann were ‘erroneous and flawed’. This led to a libel case, of which LM lost in 2000, leading their magazine to close and them having pay £150,000 each to Marshall and Williams, as well as £75,000 to ITN for libel.

Despite their loss, the staff at LM never admitted that they were wrong. Mick Hume, o . Fox meanwhile, has never apologised for the coverage, having refused back in 2018 to say sorry to the victims of the genocide over her former magazine’s wrongful handling of the event, the worst on mainland Europe since the Second World War. While Fox and her ilk weren’t the only culprits in denying the genocide – Marxist professors Noam Chomsky and Edward S. Herman behaved similarly, as they had done in the past regarding their denial of the Cambodian genocide by Pol Pot, which led to 2 million Cambodians dead – they were the main British voices advocating that point of view.

There were other controversies surrounding both Living Marxism and Fox. For the former, the magazine had also denied the 1994 Rwandan genocide, whereby Fiona Fox wrote a piece for it where she put the word genocide in quotes, all the while claiming that ‘this was not a pre-planned genocide of one tribe by another. Those targeted by government militia were Tutsis and Hutus suspected of supporting the RPA invasion’, despite the evidence to the contrary. Living Marxism had similarly defended the IRA’s terror campaign during The Troubles, following on from the 1993 Warrington bombing carried out by the group, of which would inspire the famous Cranberries song ‘Zombie’. They stated that they supported ‘the right of the Irish people to take whatever measures necessary in their struggle for freedom’, which led to much controversy at the time. Fox herself got into renewed bother when running as a Brexit Party MEP, with her old relaxed views on child porn resurfacing, something she apologised for, calling those views ‘stupid’.

To make matters stranger, LM still lives on – currently under the guise of Spiked magazine, of which Hume and Guldberg started in 2001, shortly after LM was forced to close. Fox meanwhile started the Academy of Ideas, a thinktank closely linked to her former LM, which continues under her sole directorship today. So why does Fox, the former Trotskyist who had a hand in a very questionable publication to put it mildly, manage to get so cosy with ideologically conservative citizens, so much so that she’s managed to acquire a seat in the House of Lords?

The main possible reason that Conservative Prime Minister Boris Johnson has worked with her ilk before. Munira Mizra, a current advisor to Johnson and a previous worker of his when he was London Mayor, was also a former member of the Revolutionary Communist Party until it dissolved in 1997, looking like it was a favour to include a former political ally in the Lords. Other conservatives have oddly accepted her too. Brexit Party leader Nigel Farage – of who had wrongly called the For Britain Movement leader Anne Marie Waters ‘racist’ after she lost her race to become UKIP leader, and partially led to Winston McKenzie’s resignation and Godfrey Bloom’s removal from UKIP for their occasionally eccentric behaviour – placed Fox as a Brexit Party MEP candidate.

Fox is currently going to be a Lord as a Brexit Party member, making her the first representative from that party to join the House of Lords. This is despite her staunch anti-HOL views – she claims that as the anti-Lords Green Party also has political peers, she isn’t a hypocrite – a platform the Brexit Party stands on.