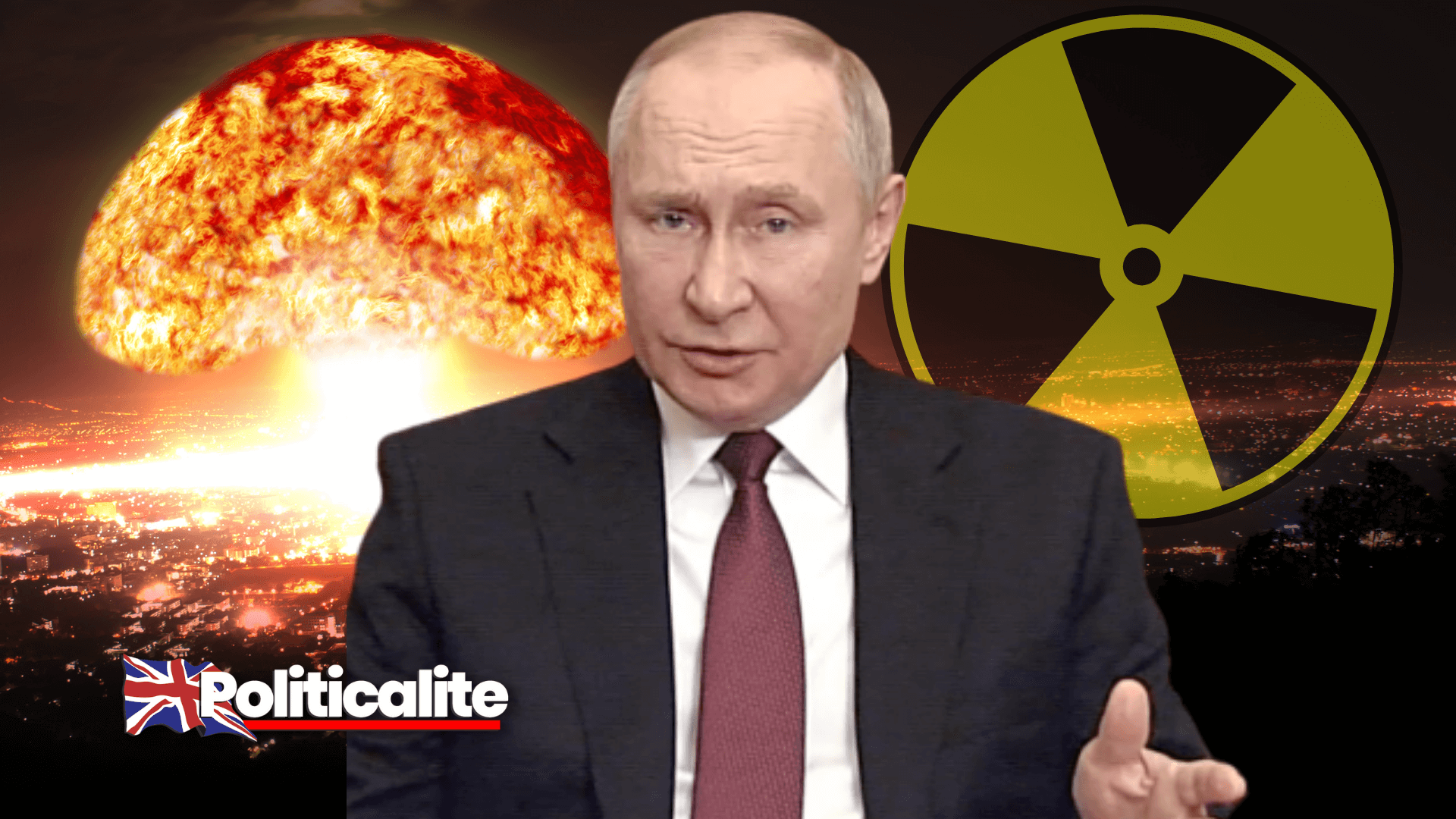 RUSSIAN Dictator Vladimir Putin has put Russia’s strategic nuclear deterrent forces on alert, dramatically ratcheting up the tensions in his stand-off with the West over his insane invasion of Ukraine.

The United States immediately denounced the latest escalation by the Russian President as “completely unacceptable”.

Britain’s Foreign Secretary Liz Truss had earlier warned any use by Russia of its tactical battlefield nuclear weapons against Ukrainian forces would represent an “extremely serious escalation” of the conflict.

The development came as ITV News obtained a Russian Government document that called for doctors and medics in the event of a “massive medical emergency.”

Russian television footage showed Mr Putin meeting with his defence minister and the chief of the general staff, and instructing them to put the nuclear deterrent on a “special regime of combat duty”.

He cited “aggressive statements” coming from Western powers and hard-hitting economic sanctions – which include the exclusion of Russian banks from the Swift global payments system – as reasons for the action.

“Western countries aren’t only taking unfriendly actions against our country in the economic sphere, but top officials from leading Nato members made aggressive statements regarding our country,” he said.

US ambassador to the United Nations Linda Thomas-Greenfield said: “President Putin is continuing to escalate this war in a manner that is totally unacceptable.”

The moves came as Ukrainian President Volodymyr Zelensky announced he had agreed to talks with a Russian delegation on the Ukraine-Belarus border.

The Ukrainian leader had earlier rejected an offer of talks in Belarus, saying the Russian ally had been a launchpad for the invasion of his country.

In a round of Sunday morning broadcast interviews, Ms Truss said Mr Putin may be prepared to resort to “the most unsavoury means” to suppress Ukraine.

Her warning came after the Commons Defence Committee chairman Tobias Ellwood said that in the “worst-case scenario” Mr Putin could deploy low yield tactical nuclear weapons if his forces failed to make a breakthrough.

With the Russian advance on the capital, Kyiv, apparently bogged down in the face of fierce Ukrainian resistance, Ms Truss said the survival of Mr Putin’s regime could now be at stake if his invasion plan failed.

What is happening now in Ukraine is a real people’s war. We will not fall. We will not stop or get tired. We are determined to fight back fiercely as long as it is needed to defend our land.

Liz Truss added: “This could well be the beginning of the end for Putin.”

“I fear that he is prepared to use the most unsavoury means in this war,” she told Sky News’s Trevor Phillips On Sunday programme.

Asked about Russia’s arsenal of chemical and tactical nuclear weapons, she said: “I fear this conflict could be very, very bloody.”

“I urge the Russians not to escalate this conflict but we do need to be prepared for Russia to seek to use even worse weapons.”

“I think it would be hugely devastating. We need to avoid this at all costs.”

Speaking to the BBC she said that senior Russian officials could be tried for war crimes “if they do go into that arena”.

“This would be extremely serious escalation of the situation,” she said.

“The International Criminal Court has already said they are looking at what is happening in Ukraine and if I was a senior Russian official, or indeed the president, I would be very wary of taking further steps.”

Western officials have previously raised the prospect that the Russians could use thermobaric “vacuum bombs” which suck in oxygen to create a devastating, high temperature blast.

Mr Ellwood said Western allies needed to think now what their response would be if Mr Putin were to use unconventional forces.

“He could certainly use other weapons systems which haven’t been really tested or that we aren’t really used to,” he told the BBC.

“Chemical weapons, the worst case scenario would be low yield tactical nuclear weapons as well. We need to ask those questions as to what we would do.”

Following the co-ordinated announcement by the UK, US, EU and Canada late on Saturday that some Russian banks would be excluded from the Swift global payments system, Ms Truss said it was vital to maintain pressure on Moscow with more economic sanctions.

We have taken decisive action tonight with our international partners to shut Russia out of the global financial system, including the important first step of ejecting Russian banks from SWIFT.

“We will keep working together to ensure Putin pays the price for his aggression.” said UK Prime Minister Boris Johnson.

Truss added that Britian would bring forward its planned Economic Crime Bill next week and was drawing up a “hit list” of Russian oligarchs who would be targeted with travel bans and asset freezes in the coming weeks.

“There are over 100 billionaires in Russia. We have compiled a hit list of oligarchs. We are working through and putting the cases together, and every few weeks we will sanction new oligarchs,” the Foreign Secretary told Sky News.

Ms Truss acknowledged there would be an “economic cost” to pay but said it was essential that President Putin was stopped to avert future wars in Europe.

“If we don’t stop Putin in Ukraine we are going to see others under threat – the Baltics, Poland, Moldova, and it could end up in a conflict with Nato,” she said.

“Yes, there will be an economic cost here in Britain, there will be a cost in terms of access to oil and gas markets. I firmly believe that the British public understand the price we will pay if we don’t stand up to Putin now.”