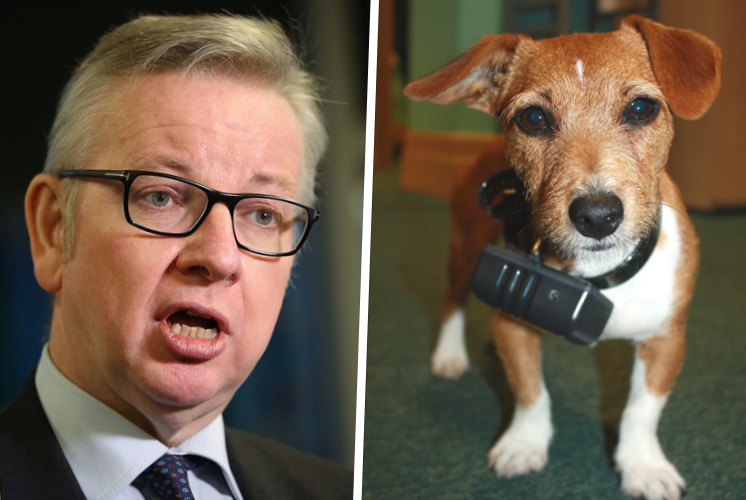 MICHAEL Gove has been accused of making a “complete 180” after letters from his department suggested there was insufficient evidence for banning electric shock collars for dogs and cats, weeks before plans to ban their use were announced.

The Environment Secretary confirmed on Monday that the Government would outlaw what he described as “punitive” shock collars which “cause harm and suffering to our pets”, following a consultation on the proposals in March.

Used as training devices, the remote-controlled collars can trigger an electric pulse of varying strength, or spray noxious chemicals at the animal.

However, a letter sent from the Department for Environment, Food and Rural Affairs (Defra) in February, seen by the Press Association, suggested that there was insufficient evidence for supporting a ban.

The document, sent to the Royal Veterinary College, noted scientific research that it had commissioned “was not strong enough to support a ban” on “electronic training aids for dogs”.

A similar statement was made by Defra Minister George Eustice in a 2014 letter, in which he said the department did not consider that there was “evidence that the use of such devices causes unnecessary suffering”.

Dog trainer and campaigner Jamie Penrith said Mr Gove had made an “abrupt” policy turnaround with no additional evidence.

He told the Press Association that in February the Government had “insufficient evidence” to conclusively support the suggestion that the collars have a negative impact on welfare, but that “two weeks later at the beginning of March these ‘barbaric, punitive devices need to be stripped from the market’”.

“It’s a complete 180,” Mr Penrith added, saying it was not a welfare move.

Ian Gregory, a lobbyist for pet collars, said: “The Secretary of State should desist from feeding the nation’s pets to the wolves of Twitter.

“The anecdotal problems reported with pet collars can be resolved by product standards rather than by banning a proven technology.

“The hundreds of thousands of dog owners using remote trainer do not deserve to be criminalised.”

The ban on remote controlled electronic training collars will not be extended to invisible fencing systems which can keep pets away from roads and within a boundary without receiving a static pulse, the Government announced.

Mr Gove said: “We are a nation of animal lovers and the use of punitive shock collars cause harm and suffering to our pets.

“This ban will improve the welfare of animals and I urge pet owners to instead use positive reward training methods.”

The announcement was welcomed by the Dogs Trust, whose director of canine behaviour and research, Dr Rachel Casey, said: “Scientific research has demonstrated that electronic devices which deliver an aversive stimulus have a negative impact on dog welfare, so this ban will have a major positive impact for dogs in the UK.

“However, we are saddened that the Government hasn’t gone a step further and used this opportunity to ban the use of containment fences, to ensure that all UK dogs are protected from this outdated approach to training.”

Use of the collars has been banned in Wales, and earlier this year Scotland began moves towards prohibiting dog owners using them.

But it is only the UK Government which can ban their sale across the country.