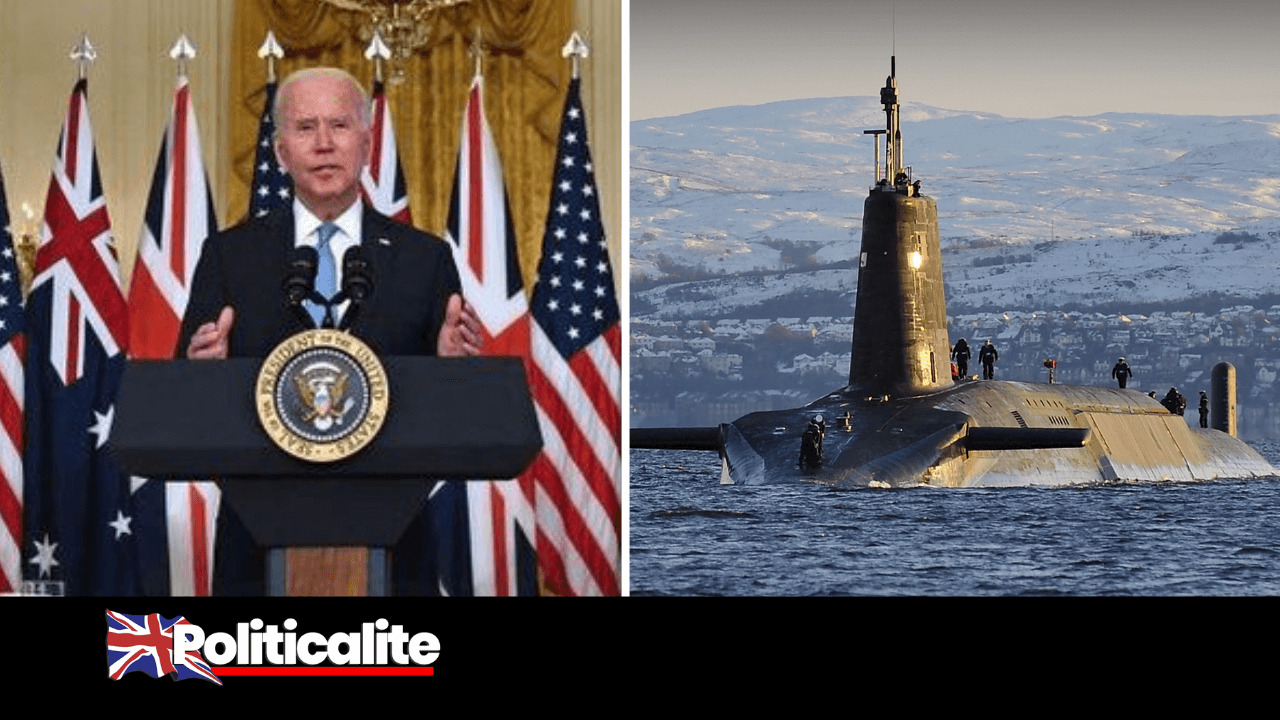 BRITAIN, The United States and Australia have announced a new security partnership to tackle wicked Communist dictatorship China in a move hailed by Western allies but denounced by China and New Zealand.

Under the new partnership dubbed AUKUS the United States and Britain will provide Australia with the technology and capability to deploy nuclear-powered submarines and surround China.

China has branded the move as “extremely irresponsible” and vowed to counter it with an arms race.

Downing Street hailed the agreement as a “landmark defence and security partnership” and said it would “protect and defend our shared interests in the Indo-Pacific”.

Officials said working closer together would allow for an increase in technology sharing and “foster deeper integration of security and defence-related science, technology, industrial bases and supply chains”.

The first initiative under Aukus will be for the three allies to work together to secure nuclear-powered submarines for the Royal Australian Navy – a move that will increase Western security capabilities in the Pacific.

The initial scoping phase for the submarines is expected to take 18 months, with the UK Government predicting the programme will “create hundreds of highly skilled scientific and engineering roles” across the country, as well as driving investment in high-tech sectors.

In a live broadcast from Downing Street, the Prime Minister said the partnership would make the world safer.

Mr Johnson said: “I’m delighted to join President Biden and Prime Minister Morrison to announce that the United Kingdom, Australia and the United States are creating a new trilateral defence partnership, known as AUKUS, with the aim of working hand-in-glove to preserve security and stability in the Indo-Pacific.

“We are opening a new chapter in our friendship.

“Perhaps most significantly, the UK, Australia and the US will be joined even more closely together, reflecting the measure of trust between us, the depth of our friendship, and the enduring strength of our shared values of freedom and democracy.

“Now the UK will embark on this project alongside our allies, making the world safer and generating jobs across the United Kingdom.”

Mr Johnson said Scotland and parts of the north of England and the Midlands would feel the benefit of the work on the nuclear-powered submarines, with the Government keen to exploit the Royal Navy’s decades-worth of knowledge of using such machines.

At a later press conference in Canberra, Mr Morrison said it was undecided if Australia would purchase British-built BAE Systems Astute-class submarines or the Virginia class vessels constructed in the US.

“China will closely watch the situation’s development.” a spokesperson said.

President Biden said: “We all recognize the imperative of ensuring peace and stability in the Indo-Pacific over the long term,” said Biden.

“We need to be able to address both the current strategic environment in the region and how it may evolve because the future of each of our nations and indeed the world depends on a free and open Indo-Pacific enduring and flourishing in the decades ahead,” he said.

Morrison said the submarines would be built in the city of Adelaide and Australia would meet all of its nuclear non-proliferation obligations.

James Clapper a former director of U.S. national intelligence, told CNN it was a bold step by Australia given its economy’s dependence on China, adding: “Clearly the Chinese will view this as provocative.”

Speaking from Australia, Mr Morrison said the world was “becoming more complex, particularly in our region, the Indo-Pacific”, and said the future of the geopolitical area “will impact all our futures”.

Mr Biden, who thanked “Boris” and “that fella Down Under” for their contributions, said the “future of each of our nations, and indeed the world, depends on a free and open Indo-Pacific enduring and flourishing in the decades ahead”.