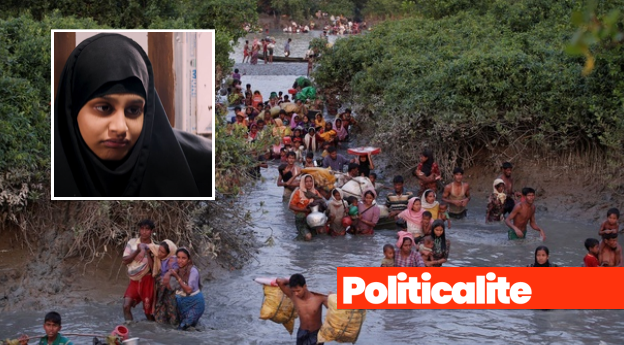 ISIS bride Shamima Begum has had her hopes of entry into Bangladesh dashed as the country blocked any chance of entry to the country.

“The government of Bangladesh is deeply concerned that [Begum] has been erroneously identified as a holder of dual citizenship,” Shahrial Alam, state minister of foreign affairs, said in a statement issued to the Guardian, adding that his government had learned of Britain’s move to cancel her citizenship rights from media reports.

“Bangladesh asserts that Ms Shamima Begum is not a Bangladeshi citizen. She is a British citizen by birth and never applied for dual nationality with Bangladesh … There is no question of her being allowed to enter into Bangladesh.”

BABY COULD GET UK CITIZENSHIP

Shamima’s ISIS baby son, who was born just days ago could still enter the UK.

Sajid Javid said: “Children should not suffer, so if a parent loses their British citizenship it does not affect the rights of their child.”

Begum is said to be “a bit shocked” that Home Secretary Sajid Javid banned her from returning to the UK by revoking her British citizenship.

Begum, 19 travelled from London to join Islamic State in Syria in 2015. “It’s “kind of heart-breaking” said Begum. “I don’t know what to say,” she told ITV News.