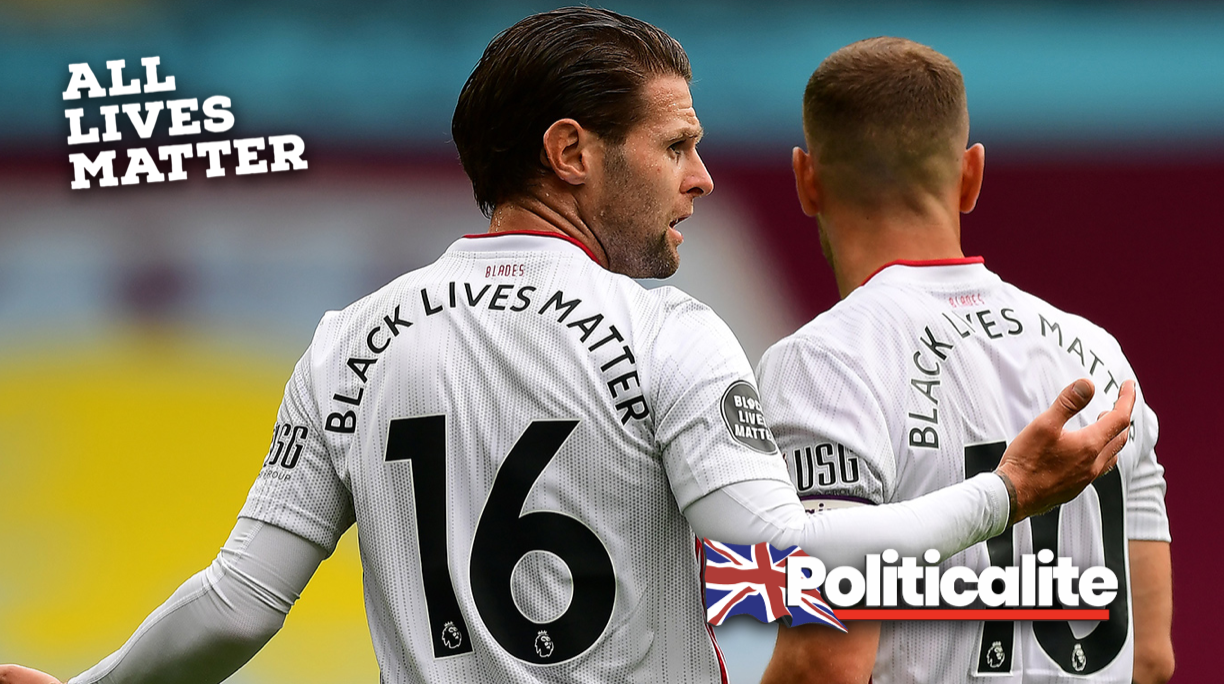 THE PREMIER League resumed this week, just in time to show its allegiance to the cause that has suddenly swept through society. The campaign ‘Black Lives Matter’ replaced players’ names on the back of their shirts. In honour of George Floyd, a black man who was choked to death by a white police officer in Minneapolis, players ‘took a knee’ before the game.

This has caused some controversy. The football authorities have always banned political slogans, and this rule was applied to ban the poppy in international matches involving England and other UK nations. Is Black Lives Matter not a political movement? It calls for the abolition of the police and the end of capitalism. Furthermore, shouldn’t the phrase be more inclusive? While other media dare not say it, this website proclaims ‘All Lives Matter’.

Footballers have much influence, as the government learned this week when Manchester United striker Marcus Rashford forced it into a U-turn on funding free meals for children during the coronavirus school closure. A young black guy who can relate to the youth of Moss Side, Rashford had more impact in a few days of tweeting than Gary Lineker has had in years of virtue-signalling and Brexit-bashing.

Undoubtedly there is discrimination in society, and it would be naïve or negligent to believe that all have equal opportunities in Britain. So perhaps football clubs and leagues should consider other injustices worth drawing to wider attention.

At the height of BLM fervour, Bolton Town Hall was illuminated. But while keen to mourn for a victim of police brutality four thousand miles away, the local authority did nothing for the recent shocking murder of Emily Jones in a Bolton park. This seven-year-old girl was with her parents when an Albanian immigrant attacked and attempted to decapitate her. An innocent child’s life was taken, but the council had other priorities at the time (whatever they were).

No, I am not going to suggest a slogan ‘White Lives Matter’. But here is another idea for our footballers’ endorsement. Tens of thousands of working-class schoolgirls in towns and cities across Britain have suffered from systematic sexual abuse by gangs of men, the victims mostly white and the perpetrators mostly of Pakistani background. This heinous crime is almost certainly aggravated by racism and religious bigotry (the terms ‘white trash’ and ‘kuffir’ were heard in some cases).

This violation of girls was allowed to go on for too long (and it probably continues) without intervention by the police and social services, due to cultural sensitivities. The Home Office’s report into grooming gangs has not been released for the same reason. Meanwhile, the government is conducting an enquiry on the disproportionate BAME mortality from Covid-19. Very well, but people readily see an inconsistency here.

Preventing the mass rape of children would be a good cause for football, a sport with a wide audience but with strong working-class roots. The representatives of towns most afflicted by this abuse would be standing up for the abused and their families: Rochdale, Rotherham and Oldham, for example. Bigger clubs such as Leeds United could get in on the act, helping to shame society out of its indifference.

Let’s see ‘Stop Grooming Gangs’ on the back of your shirts, lads.