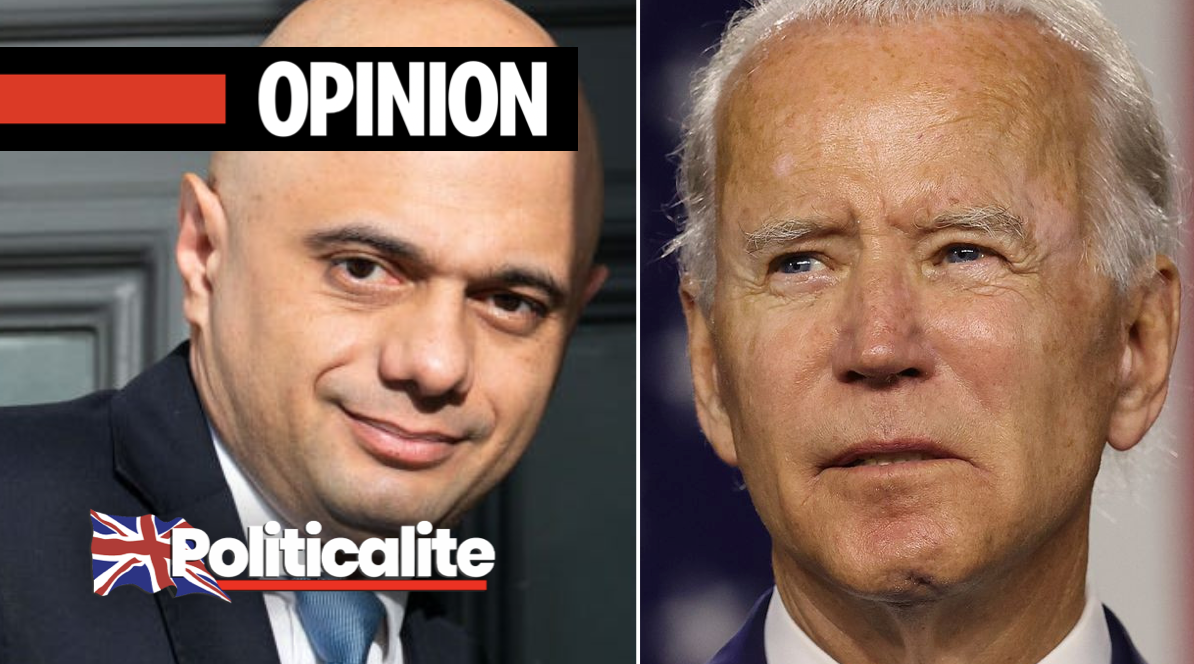 EX TORY Chancellor and Home Secretary Sajid Javid claimed that ‘Britain would be better of with Biden’ in a Telegraph piece.

Javid claimed that the Democratic Presidential nominee Joe Biden would be better for Britain, citing that he will embody the ‘great legacy’ of former Republican President Ronald Reagan. In this article, Politicalite’s Editor-At-Large Edward Howard explains why he’s so off the mark.

Ah, Sajid Javid, what a mixed bag you demonstrate for the Conservative Party. On the one hand, you have been a confident MP, showing off your conservative credentials so well that even Lord Norman Tebbit admitted to me personally that you passed his ‘cricket test’. On the other, you have rarely rebelled the against the party line, backing the Remain campaign in 2016 and the politically correct lily-livered reforms of David Cameron and co.

As a minister, you were often very impressive; as Home Secretary you promised that the (still unreleased) grooming gang report would leave race at the door in search of truth and made IS terrorists like Shamima Begum stateless, making it seem like the Tories would actually take Islamic terrorism seriously at long last.

Then again, you also also ended the hostile environment policy for illegal aliens, presumably why we currently have an invasion of them on our shores. You’ve even expressed some courage too; denouncing cancel culture when it comes to government advisor Munira Mizra and libertarian conservative commentator Darren Grimes. Despite this, you were happy to let the braying wolves eat David Starkey for his misjudged comments, even though he apologised for them.

What I’m saying is that you have a mixed record, so it isn’t surprising that when someone to the right of you is running in a contested election, you back someone who represents the liberal establishment of your party a heck of a lot more than the other guy.

It’s why more Conservative MPs and representatives are more comfortable backing neoliberals and neoconservative types like Mitt Romney and George W. Bush, of whose only policies concern moving the social dial further left, all the while bombing the Middle East in to oblivion and supporting GDP increases to please their rich friends on Wall Street.

In your article, entitled ‘Britain would be better off with Joe Biden’ – a misjudged title if there ever was one, for various reasons – this streak is turned up to 11, and is disappointing for someone who has demonstrated the kind of promise you have done in the past.

This is because in the start of the article, you take the same line on Trump and conservatism as a whole many of America’s New York liberals masquerading as conservatives do like Bret Stephens and Lincoln Project, that Trump isn’t one of you because he doesn’t believe in free trade and reckless foreign policy. Of course, neither free trade or endless foreign wars are conservative values – the former was rightly rejected by the movement for decades even leading to the likes of Sir Robert Peel being expelled from his own party because of it, and the latter being a plot of neoconservatives, who were Trotskyist in origin.

You then dismiss worries about Joe Biden’s previous hostility to the UK – including threats surrounding the Good Friday Agreement and the Obama administration where he was Vice President in openly economically blackmailing Britain if it voted to leave the European Union – as ‘overstated’, without much in the way of evidence. You claim that Biden’s relationship is ‘bigger than our respective leaders’ – which given that both the Democratic establishment and several US politicians have sung from the same hymn sheet, seems illogical at best – and that Boris isn’t the ‘British Trump’ and that ‘Biden will find he has more in common with the Johnson government than Trump ever did’. A shame really, as people want a true conservative in office, not a continuation of a weak liberal establishment, as confirmed by the Red Wall seats turning blue for Boris’ nationalist rhetoric last December.

You then criticise Trump’s ‘protectionist’ economic policies, something mainstream in the Republican Party ’til the 1980s, and was why Trump won the rustbelt of his country, long thought lost to the Democratic Party. Free trade damaged the US massively, so much so that paleoconservative commentator Patrick J. Buchanan – who backed Trump as well in 2016 – warned that ‘the industrial evisceration of the United States will continue until we make nothing the world wants but Hollywood movies’ if it continued down its current route.

In fact, instead of Britain further embracing free trade, it should return to a more protectionist route, especially with a COVID imposed recession and a spike in unemployment on the way. It’s saved this country before, both when it enabled Scotland to become part of the Union, and during the Great Depression, when we got out of it quicker than most first world nations, partially because of economic protectionism. You shouldn’t be singing the praises of the TPP deal, of which Trump was right to bin, and whose threats to the NHS were one of the main reasons many voted to leave the European Union. We shouldn’t be becoming a ‘global champion of free trade’, and shouldn’t praise Joe Biden for being so either.

You then criticise Trump for making absent ‘the moral authority and global leadership’ of the United States, and for praising ‘oppressive strongman leaders’, without any evidence whatsoever. While you may defend him clashing with China, you seem to imply he was being slack before. Given his popular trade wars with the country, as well as how the likes of George Osborne openly pandered to Xi Jinping and his cabal of gangsters when he was Chancellor, this is unfair slander.

You then slyly sneer at Trump for his lack of environmentalist creed, hinting to his lack of interest in the Paris Climate Accord and needing ‘global solutions’ to climate change. This falls down once you consider that Biden’s plan would kill the US economy (the ramifications of which aren’t eco friendly), carbon emissions are falling under Trump, and this government ploughs on with environmentally poisonous projects like a third runway at Heathrow Airport and HS2. Weak.

Meanwhile, you conclude by claiming that Trump isn’t interesting in rebuilding, and that he ‘thrives on division’, by stoking his culture war. One can only wonder at the sheer arrogance of this; Trump is clearly reacting to problems not causing them? When the far-left tear down statues and riot in various cities, Trump is labelled an authoritarian and sending in the ‘secret police’ for restoring law and order. When he tries to bring troops home, he is accused of betraying allies by left and right alike. When he rightly called out both sides in the disgusting scenes of violent behaviour of the 2017 Unite The Right rally, the media lies by claiming he supports Neo-Nazis and takes his quotes out of context to justify their myth making on the man.

He is fighting back, not laying down and taking it, hence why he’s popular with the GOP and millions of Americans, in a way the likes of the aforementioned Bush and Romney weren’t. Heck, wasn’t the ‘culture war’ rhetoric the type of which Boris Johnson relied on to become PM, win over the Red Wall and constitute policies to avoid losing that new constituency? Hypocrisy, my name is Sajid Javid.

So no, Sajid, Biden isn’t best for Britain. In fact, he’s more likely to continue the tradition of Democratic Presidents abusing the Special Relationship to attack Britain to improve their own stature, whether it be LBJ using British aid in the Vietnam War, despite how unpopular it was back home, or Bill Clinton inviting Gerry Adams over at the height of The Troubles, to win over Catholic Irish American voters.

Trump has probably been one of the few not to abuse it, and has respected it the best since FDR during World War 2. Britain has already been embarrassed by the several sneers at Trump by left-wing Tories more interested in virtue signalling to their small leftist bases as opposed to their wider audiences, ranging from moaning about his sometimes misjudged Twitter behaviour to having ambassadors break important impartiality rules.

If the Tories want to truly represent conservatism, Javid and his ilk of liberal conservatives should be ignored in favour of a pro-Trump consensus from here on in. So to my fellow Tories, be less like Javid here, and more like John Hayes MP. Bish bash bosh indeed.